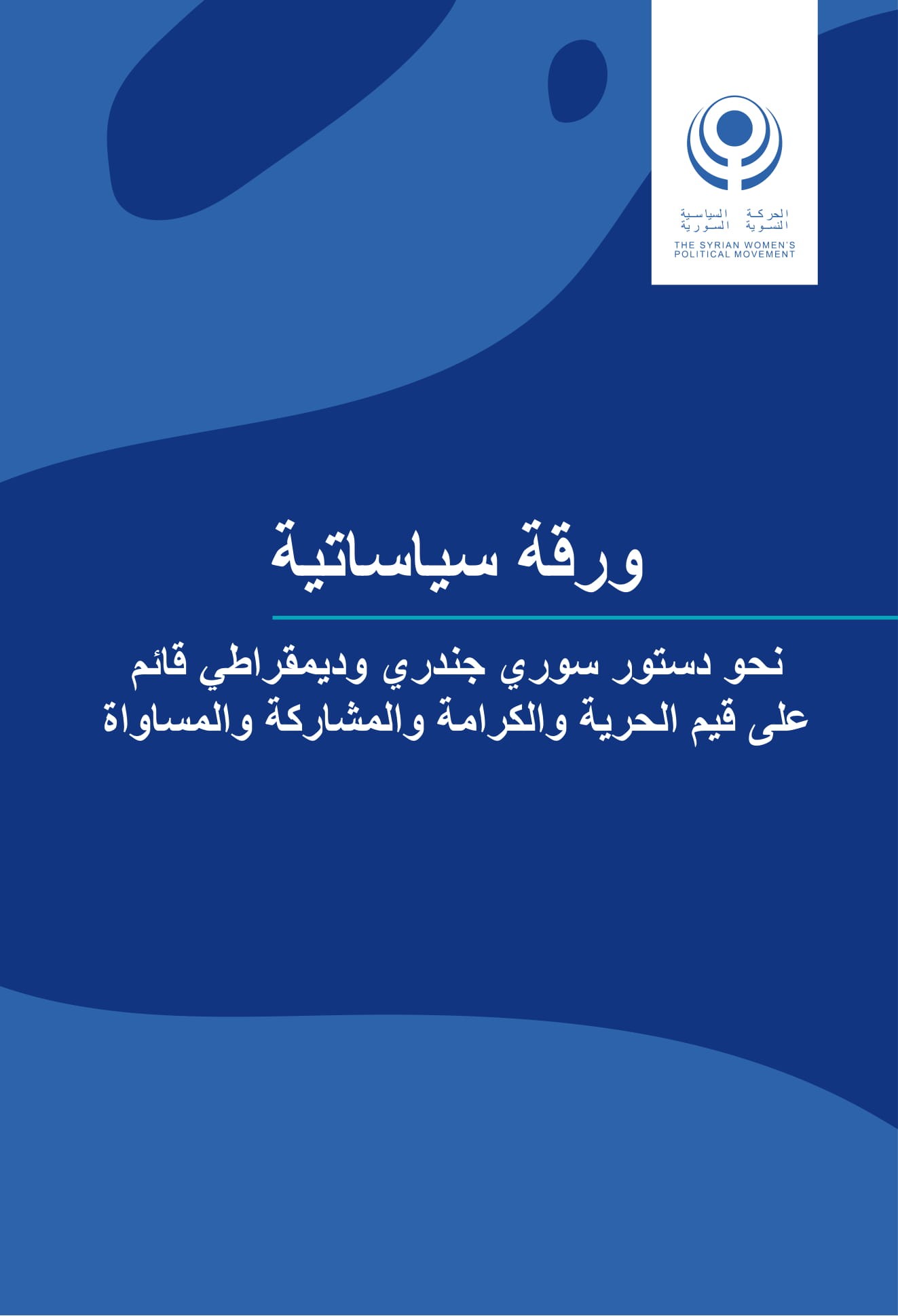 A general reading of the process of activating the political transition in Syria over the last year, which has been through international and UN efforts to push for a constitutional reform process, two interconnected points can be noted. The first is that the proposal of drafting a new constitution in Syria is not a popular demand, as the perception is that the track of the constitutional process has started behind closed doors and within international circles that have narrow political interests, to which the Syrian political opposition was annexed at a later stage. The second is the limited political participation by women, feminists, and the general public in this transitional track. According to the women groups that participated in a series of regional consultations[1], this limitation was the result of intertwined factors of (both current and historic) of marginalization and exclusion of popular base and feminist groups by the political forces affiliated with the regime or the opposition alike.

This exclusion and marginalization by the different political sides, which was accompanied with historic marginalization and exclusion of the general public, women, and feminist groups by the regime in Syria, generated or intensified a feeling of public and feminist distrust in the seriousness of any proposed solutions for a democratic and peaceful political transition. This lack of trust has been reflected, not only on the ruling regime and the mechanisms of its institutions, but even in the proposed constitutional process, including the constitutional committee that the women participating in the consultations see as an imposed apportionment based on political affiliation.

Nevertheless, if this constitutional process will be pushed forward by international actors and the United Nations, with the participation of the Syrian opposition, despite the obvious political impediments put forth by the regime, women groups insist to have their voices heard and their issues and rights considered both in the process and substance of a new constitution.

In this context, the Syrian Women Political Movement (SWPM) in coordination and partnership with Women’s International League for Peace and Freedom (WILPF) conducted a series of regional consultations conducted with eight women groups in December 2018 and January 2019. The aim of these consultations was to identify women’s priorities and the challenges they face; and explore their positions, opinions, and aspirations relating to the process and substance of the constitution they aspire to see in Syria. Two of the eight consultations were held in areas under the control of the regime, and five  were held in northern Syria, in addition to one in a neighboring country, with the participation of more than 125 women and 9 men.[2]

The women who participated in a series of regional consultations formulated what can be called “a feminist human rights manifesto” in which they covered all areas of political, cultural, economic, and social rights they aspire to have enshrined in a new constitution, or at least to include a number of values and principles related to equality and removing any gender-based discrimination therein. The women proposed a set of practical steps and recommendations they want a new constitution to include, in order to be sensitive to gender issues and their human rights as equal citizens in society.

Although the women were not able to specify the shape of the desired governance system that should be provided for in a new constitution – whether parliamentary, presidential, or hybrid – they asserted, with full feminist awareness and political understanding, that the most prominent principles that should be enshrined in a new constitution are democracy, plurality, and the separation of powers, through employing monitoring and accountability and ensuring that the president does not have absolute powers.

This feminist political awareness can be seen thorough:

–          Their knowledge of the political and transitional track that started behind closed doors and in international circles that have their own narrow political interests;

–          The assertion that the constitution should be drafted by Syrians and should be put to a public referendum, considering the current proposed political solution was imposed by fiat, without taking the priorities of the public and feminist groups into consideration or including those groups in shaping a political solution;

–          Women’s awareness of the dimensions of the regime practices of systematic exclusion and marginalization of the public at large and women in particular, especially what is considered to be a double-folded marginalization for women and feminist groups. This is the result of excluding all human rights and feminist issues completely and utilizing military tools, constraining movement and communities, and spreading male-driven practices, including intimidation, sexual harassment, rape, and others;

–          Women’s awareness of the mechanisms of marginalization pursued by some opposition factions and de facto powers in some areas outside the control of the regime, through preventing access to a number of social rights, such as education, health care, and social security, in addition to imposing a number of practices based on traditions that constrain women’s freedom, movement, and access to different social and financial resources;

–          Questioning the feasibility of the constitutional committee selection process, especially in light of the absence of criteria for the selection of members in accordance with the committee’s tasks;

–          The women identified the priorities of political transition in terms of the importance of addressing the issue of restoring security, achieving sustainable peace, and resolving the issue of the detainees and kidnapped, and disclosing their fate before or in parallel with addressing the constitutional reform. “We need first to resolve the pending issues, then we can talk about the constitution; we want to ensure safety and security and how credible such security is, then we have a binding charter that guarantees our educational, health, and political rights. We will not accept an illegitimate constitution” (one of the women who participated in the consultations);

–          The women identified the most prominent values, criteria, and feminist and human rights principles that should be provided for in the constitution in order to be a democratic and feminist constitution expressing the needs of the people it allegedly represents.

It should be noted that this paper is a road map that summarizes, tabulates, and analyzes the most relevant information provided by the women participating in the consultations, from a feminist perspective, to influence the process and substance of the constitutional process. This paper also presents the most prominent feminist demands with a reference to the challenges and recommendations that should be highlighted and noted when addressing a decisive matter such as the constitution. Furthermore, this paper provides a set of titles by analyzing and monitoring the most prominent intersections in the attitudes and opinions expressed by the women in the different areas covered by the consultations; therefore, the most prominent points that formed a consensus among women despite the cultural, intellectual, and ideological differences. Some critical points that have basis in human rights and which were addressed by some women in some areas, although not unanimously approved in all areas, are noted because of their criticality for the gender approach of the constitution.

On the Constitutional Process

1)      Ensuring the engagement of public and societal groups (including women/feminists) in the context of the constitutional process and considering their demands, needs, and priorities to ensure the popular legitimacy of the constitution. Women must be involved in the drafting of the constitution by seeing it and voting on it before it issues.

3)      Having clear criteria in the selection of those nominated for the constitutional committee so that the constitutional drafting process is a technical process rather than one subject to apportionment based on political affiliations.

On the preamble/values and principles

1)      The constitution must explicitly stipulate the values of equality and gender justice, guarantee women’s dignity and freedom, respect, inclusion, and partnership, and putting an end to discrimination on all levels, particularly on the basis of race, sex, or gender.

2)      Ensuring there are no provisions in the constitution that contradict those principles, particularly those pertaining to societal structure and the women roles.

3)      It is essential for the constitution to include the principles of democracy and pluralism through activating a monitoring and accountability system, guaranteeing the president does not have absolute powers, and activating the principle of separation of powers.

4)      It is essential that the constitution is in line with international conventions to which Syria is signatory and that it removes the reservations on CEDAW, particularly articles 2, 9, 15 and 16, in order to ensure equality.

On rights in general

2)      Ensuring the consolidation of women’s right of active citizenship in Syria by establishing their right to grant their nationality to their husbands and children in case they are married to non-Syrian citizens.

7)      Legal and constitutional protection of women survivors of domestic and household violence must be guaranteed.

On the religion of the president and their gender

1)      It is essential that the religion of the president is not determined in the constitution to ensure pluralism and democracy.

2)      The language of the constitution must be engendered to be gender-sensitive and include the rights of all male and female citizens. Special attention must be given to engendering article 84 which defines the conditions for running for office so as not to restrict candidacy to men.

[1] See the section on methodology of this paper.

[2] It is noteworthy that men’s participation was limited to one area in the first session, then a decision was made to make the participation available for women only, to ensure that men do not drive or influence the discussion, so that to get a feminist perspective on the issues being discussed.

[3] It is noteworthy that the recommendations in this paper are a synthesis of the most prominent demands expressed by women who participated in the consultation in an innate feminist political awareness, and they were agreed upon by most women across the board from different areas.

Policy Paper- No Elections Without Our Participation: A safe environment for fair, impartial, and legitimate elections from the perspective of Syrian women