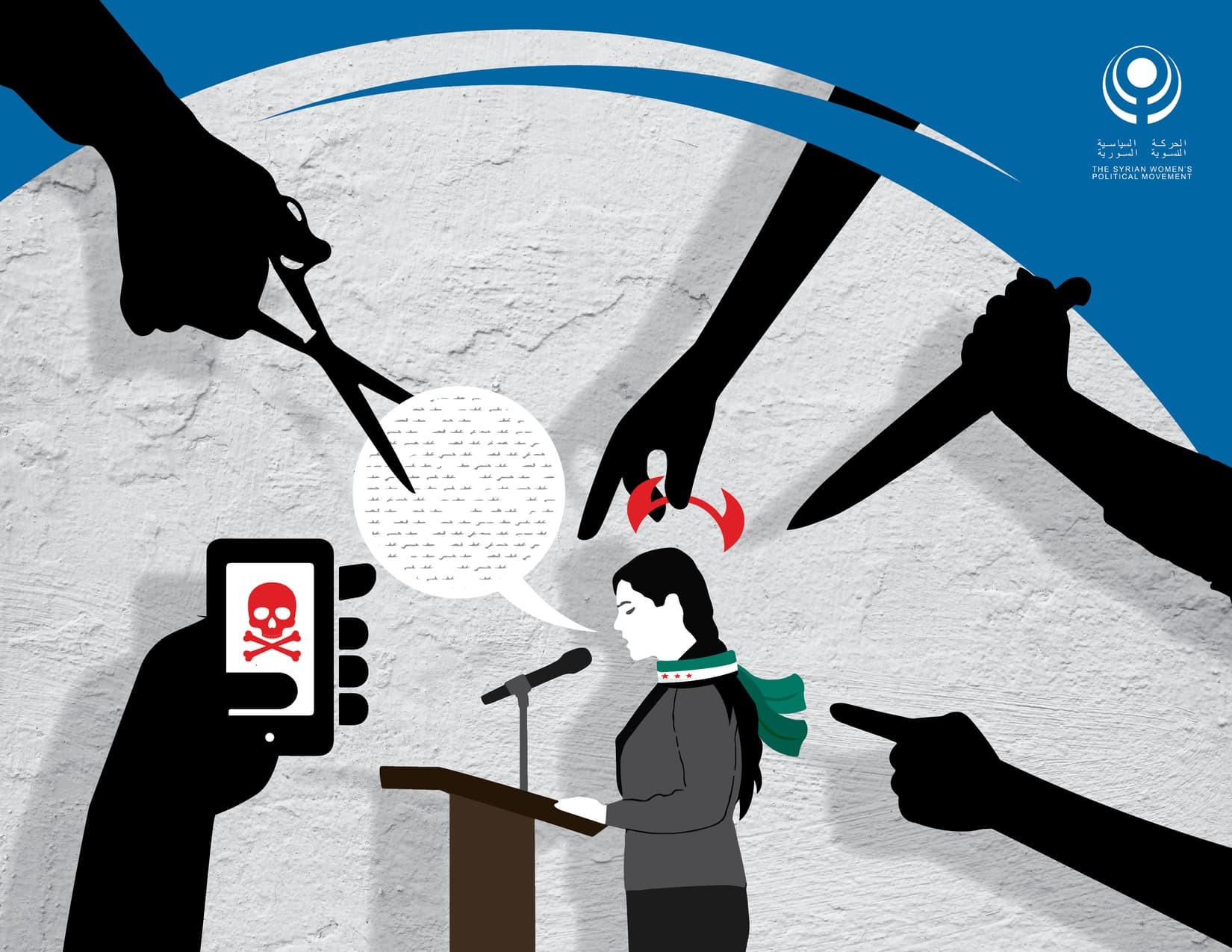 Three Faces of War on Women

Three Faces of War on Women

25November was declared an International Day for Elimination of Violence against Women since 1981. following the brutal assassination of the three Mirabal sisters, political activists from the Dominican Republic in 1960.

For more than eight years, Syrian women have suffered from the deterioration of their basic rights at all levels: security, social, economic, health and psychological. And were victims of several forms of abuse like arbitrary killing, detention, forced disappearance, torture, execution, displacement, and sexual violence. This article reviews three faces of war on women.

Syrian women who played a role in the Syrian revolution were subjected to additional forms of violations which were portrait and could be traced over the years of the Syrian revolution. In addition to the violations mentioned above, Syrian political women suffer from violent defamation, demonization campaigns aimed at excluding, breaking their spirit and undermining trust between them and their rebellious people thus to eventually abolish their role.

To understand this gender-based political terrorism, it is important to analyze some of the implications of the violent defamation campaigns against Syrian women who are anti-regime and are role players in the public affairs, especially since 2011. However, two important points must be recalled at the outset:

Second, it is important to emphasize that these defamation campaigns have a greater impact on the reputation and trajectory of political women rather than on men once we address the issue taking into consideration the predominant moral structure in Syria and the status of women associated with customs and traditions.

To address the gender-based political terrorism and the defamation demonization campaigns, we need to tackle two levels:

The Syrian regime resorted to defaming the opposition, especially women by using its security services and media as weapons in its violent defamation campaigns to settle its scores with them. These campaigns aim at hitting the opposition, undermining its credibility and presenting it to society as immoral and corrupt in general. Women, in particular, are targeted with the aims of assassinating them morally and politically, excluding them from the political arena, and striking their parties and movements through them and weakening their political and civil entities. This is to be read as a fulfilment of the regime’s policies adopted to repress the Syrian people, extorting them by persecuting women, arbitrarily arresting them, and striking their communities by harming women in all possible forms.

On the other hand, the observer of the regime’s media scene can simply monitor its relentless pursuit to draw its image as a regime of civilization and equality. A regime where women play an active role in the developmental and political levels. Therefore, Asma al-Assad presented the “soft power” and the cornerstone of the regime’s media policy on the women’s level since the outbreak of the Syrian revolution to whitewash the Syrian regime image and raise his profile especially abroad.

“The popular revolutions, whether in their first or second wave, called for achieving justice for all and equity between the genders in terms of human dignity and according to human rights and citizenship. Therefore, all campaigns of exclusion of women using violence, restraint and degrading “religion, morality, family, customs of society” against the right of women will not be able to stop the struggle for equal rights.

So, it was no surprise that the regime would seek to demonize these women, humiliate and purge them. This regime already did that in its detention centers, its media, and its supportive environment. If the position of the opposition groups is the same as the regime, this shows that many Syrians do not have the awareness to go beyond the issue of discrimination against women, and the values ​​of equality have not yet taken root in their community. if we add the position of anti-egalitarian Islamist groups to this reality, we will find that the situation of women in Syria isn’t good; on the contrary, as we said, these revolutions especially because they are rights revolutions, have been enormously and brutally repressed.” Says Ammar Dayoub writer and political analyst.

– The community taboos and the rebellion masses:

Syrian political women, especially feminists, find themselves in the upfront of a constant fight not only with the brutal regime but also with social costumes and traditions. Despite the leading role of women in the revolutionary movement, and civil work, the social costumes maintained its dominant role in terms of dealing with women. This role is portrait and highlighted in several shapes form imposing restrictions and purging rebellion women and detainees to abandoning them by their families and stigmatizing them to the so-called crimes of honor.

Added to these forms of confrontation is a new type imposed by virtual spaces. What we can call Today “stoning media”

The Syrian revolution witnessed during its 9 years several defamation campaigns launched by the Syrian regime or opposition parties at times against politician Syrian women. some of these campaigns included posting photoshopped abusive images with sexist comments that demean human dignity. These posts and images were circulated and widely of tweeted and shared on public and private spaces to raise controversy for quite some time, especially that the rebellion masses had its part of sharing and interacting with this news and comments. The community’s interaction with these campaigns can be ascribed to different causes, one is the social rejection of women playing a political role as mentioned above, the loss of confidence in all political parties, and the dominance of hate speech which resulted from distorting the Syrian identity and the dominance of partial identities.

Lina Wafai, the official spokeswoman for the Syrian women political movement, said: “The Syrian regime adopted this policy to target its opponents even before the birth of the Syrian revolution. It has deliberately defamed all those who work in the political field. Historically we find many examples of this, like the war on the political left where the regime resorted to defamation campaigns.” And accusations of moral decay to wage wars on political left women and this was carried out, of course, relying on the sensitivity of the status of women in our society.

“Today, we find these campaigns started against women participating in the constitutional committee and before those female members of the negotiating body, these campaigns are being launched by the Syrian regime, in addition to some opposition forces, to bring down certain figures that are not politically compatible with them.”

In the end it is worth mentioning that “from March 2011 to November 25, 2019, 28076 females were killed in Syria, 84% by Syrian forces and their allies and at least 10,363 are still in detention or forced disappearance by the main waring actors in Syria” according to The Syrian Network for Human Rights latest report.