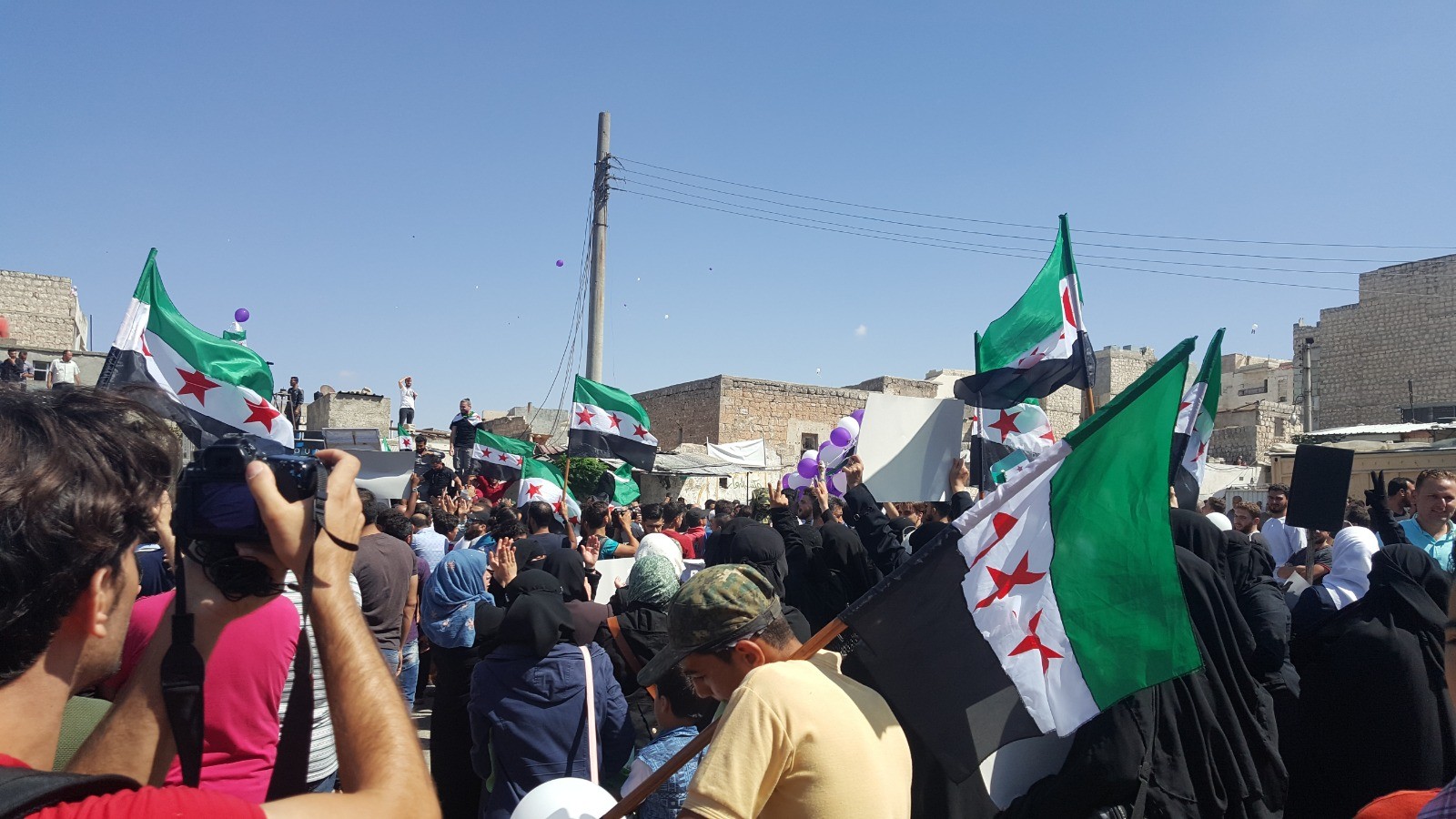 Suha
al-Ahmad (a pseudonym) was born in 1976. She is from Idlib countryside, a
graduate of engineering from Aleppo University. She is working in one of the
women organizations in Idlib countryside. She is a member of SWPM.

At the
beginning of the revolution in 2011, Suha was an employee in a governmental department
in Idlib city. Since she is coming from a conservative community that didn’t
allow women to participate in demonstrations in the beginning, she describes
her participation as being only sympathetic. She watched protests in the
streets and saluted them. Because of that, one of the employees working with
her, submitted a report against her to security bodies stating in it that she
was with the opposition, so she left her job since the early days of the revolution.

Just like
other Syrians before the revolution, Suha wasn’t interested in politics because
it was a taboo under the Assad regime. However, with the beginning of the Arab
Spring revolutions and witnessing how other Arab peoples revolted and demanded
freedom and the topple of their corrupt regimes, she started to feel a deep
feeling for revolting against the regime and its oppression and to dream of a
free state where people are not killed for expressing their minds.

After the
liberation of her area in Idlib countryside, Suha said that she started to
participate in civil and community awareness-raising lectures and political
empowerment courses for women. She joined SWPM and she is working with an
organization concerned with women rights. She considers her political activity
as a natural right that she should enjoy as a citizen just as any man in her
country. She believes that she has the right to express her opinion about the
future of her county, especially that she sees how women suffered the most and
bore the largest burden in the war in Syria, so they have the right to take
part in the decision making process.

“I joined
SWPM because I found in it a platform to express my opinion and an
environment that meets my aspiration for realizing justice, freedom, equality,
changing community perception of women, enhancing and supporting women
participation in politics and increasing women representation in political
bodies.”

Some of the
challenges that faced and still face the political activity in Syria in Suha’s
opinion are the affiliation to foreign actors and the lack of unity within the
opposition. As for the challenges she faces as a woman working in politics is
the community perception of women in general and marginalizing their opinions
when it comes to politics. Even after the liberation of her area from the
regime, Islamic factions there intervened in people’s lives and tighten the
grip around women movement.

Suha joined
SWPM because she found in it a platform through which she can express her
opinion and an environment that meets her aspiration for realizing justice,
freedom, equality, changing community perception of women, enhancing and
supporting women participation in politics and increasing women representation
in political bodies.

Suha says
that she expects SWPM to accomplish a lot through communicating women voices
into the political arena and decision making positions, because SWPM includes
women who work faithfully with clear parameters to realize their goals which
represent the goals of all Syrian women.

“I dream of a united,
safe, democratic Syria free of sectarianism or discrimination of any form;
Syria free of oppression, tyranny or corruption.’’

“We should
not forget the martyrs’ blood; it should be a motive for us till the victory of
our revolution. We should keep strong belief and commitment to the goals of our
revolution and we should educate and raise the political awareness of women in
specific and the community at large, to achieve freedom we have been calling for
and to live under a law that protects all people, women and men, and treats
them equally.” Suha said.

Suha dreams
of a united, safe, democratic Syria free of sectarianism or discrimination of
any form; Syria free of oppression, tyranny or corruption, where human beings
are respected and enjoy their rights, in a state where women and men are equal
in rights and obligations.

“Syrian
women are amongst the greatest women in history, because they are patient
strugglers who suffered oppression and suppression and offered great sacrifices
during the revolution. Syrian women proved their competency in all fields, including
the political field”.  Suha said. She
also added that: “I call
on Syrian women to hold to hope and persistence to continue in this path and
realize their goals. They should help each other to become aware of their
social and political rights”.