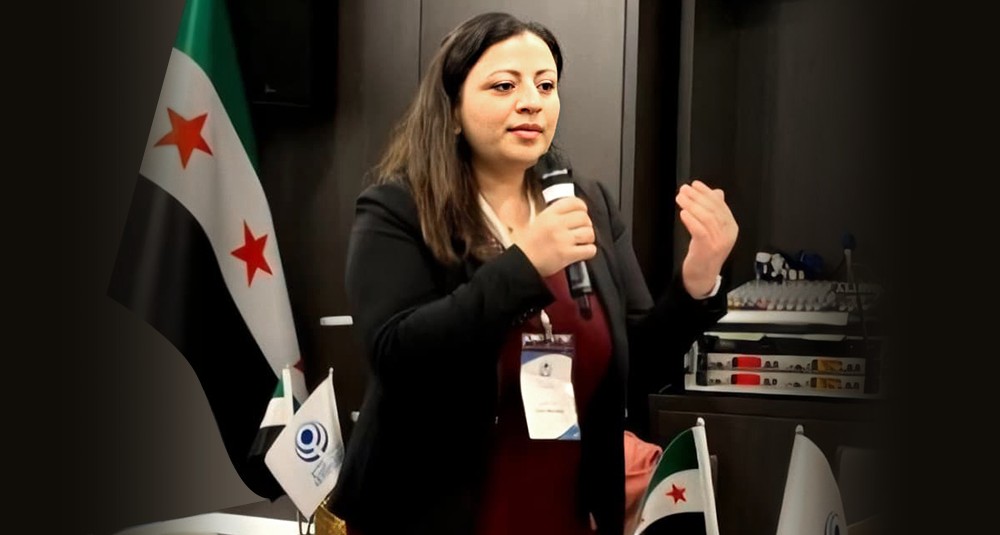 Dima Moussa, Political Work, From a Feminist Perspective, Encouraged me to Participate in Founding the Movement

Dima Moussa, Political Work, From a Feminist Perspective, Encouraged me to Participate in Founding the Movement

Dima Moussa was a practicing lawyer in the United States of America, when the revolution started in Syria. She decided, after the revolution, to leave her work to dedicate her efforts for the Syrian issue, as she was working with activists in Syria. In late 2012, as the political and civil activity increased significantly in Turkey, Dima decided to go there on a visit to learn more about the female and male activists she has been working with and the people involved in the political work and Syrian affairs. Because of living in the USA, her political activity with the National Council, which she joined in 2011, was limited, as she said. Therefore, she decided to move to Turkey in early 2013, where she worked with organizations supporting civil projects and initiatives inside Syria. She became more connected with the political work and she increased her activities with civil organizations inside Syria and Syrian groups in Turkey.

Dima says that since the beginning of the revolution, because she was living abroad, it was easy for her to appear on media outlets using her real name, especially on western channels and platforms, to be the voice of activists in Syria, communicating the reality of what was happening on the ground and the gravity of crimes perpetrated by the regime against the Syrian people. Dima met with international media outlets and with people in charge of foreign and political affairs. She also worked with activists from Homs city, helping in translating news reports about regime violations and communicating these reports to media and human rights organizations, putting her legal background and good command of English at use.

“I believe in moral political work; from this standpoint, I don’t consider myself to be only a politician, but a feminist as well because feminism adds this moral character as it is against all forms of discrimination.”

In addition to being from an opposition family that migrated from Syria since 1990s because of the oppression and tyranny of Hafez al-Assad regime, Dima says that her motivation to participate in 2011 was also out of her absolute belief in human rights and the need for changing all dictatorial regimes in Syria and other Arab countries, replacing them with democratic regimes that respect human rights. Based on her personal experience of living in a country where the rule of law prevails and everyone lives under the portectio of law that doesn’t discriminate against anyone on the basis of gender, religion, color, political affiliation or any other classification, she has always dreamed that the Syrian people would live under a just law and democratic governance, because they deserve to have a decent life just like any other people.

Dima believes in the importance of political work along with the civil and human rights activity, to communicate the voice of the Syrian people to international forums. She says that we need a political solution and we must recognize what we want from such solution, and how to best push for an international consensus to achieve a just solution for the suffering and the cause of the Syrian people. “I believe in moral political work; from this standpoint, I don’t consider myself to be only a politician, but a feminist as well because feminism adds this moral character as it is against all forms of discrimination.” She adds. But she thinks that Syrians are by large marginalized politically in the conflict taking place on their land. Additionally, women who believe in the principles of the revolution that aims at achieving justice in a country free of the tyranny and oppression of the Assad regime or any form of tyranny and injustice should be present at the political table.

Dima sees that one of the biggest challenges facing the political work in Syria is that the conflict became multilateral, with international and regional military and political interventions seeking their own interests at the expense of the Syrian people, in addition to the de facto forces in different areas of Syria, which fragmented the Syrian cause at the international level, by committing tyrannical practices just like the regime. In terms of challenges facing women in politics, Dima says that our society is indeed a masculine society that stereotypes women role in certain forms and determines their role to be largely limited to housewives or certain occupations, although housewives have started working outside their homes over the past years and became one of the key economic pillars in society after the detention, martyrdom or enforced disappearance of men who were the main, or even the only, breadwinners in the household. So, women shouldered double burdens, as the only providers for their households and sometimes for several families, in addition to their work at home. For women to engage in politics, they must always prove their competence and work hard, although they may be more competent than men.

“SWPM succeeded in linking political work with civil work, which enriches the movement a lot. This integration and intertwined activity enabled SWPM to work with Syrian women everywhere, especially inside Syria, through SWPM members who work in civil, human rights or feminist organizations.”

On her participation in founding SWPM, Dima says that she participated out of her belief that there must be a movement that focuses on political work, but from a feminist perspective that believes in full equality at all levels and in ending all forms of discrimination on any basis. She adds that SWPM is mainly focused on the participation of women in the Syrian political process as well as ending discrimination against women, ensuring their freedom and practice of all their civil and political rights. Dima says that there should have always been a body or movement that represents Syrian political and feminist women who are working for justice to all Syrian women, especially that the representation of women in opposition political bodies is still very small, and this is what the movement is seeking to change.

Dima expects that SWPM will manage to convey the suffering of Syrian women in particular, and the Syrian people at large, from persecution and its effects on the social, legal and political levels, through their letters that address international parties and forums. She also says that SWPM succeeded in linking political work with civil work, which enriches the movement a lot. This integration and intertwined activity enabled SWPM to work with Syrian women everywhere, especially inside Syria, through SWPM members who work in civil, human rights or feminist organizations that has no certain character. Dima believes that the presence of SWPM members in different countries is one of the strengths of the movement and enables it to reach a larger and more diversified group of Syrian women and men.

Dima says that there are several SWPM members who are part of political bodies and other parties, such as the National Coalition, the Negotiations Commission, the National Coordination Body and Muwatana Current. Therefore, they are always trying to convey most of SWPM messages, vision and demands through their presence in these bodies.

Dima says to Syrian women: “Syrian women deserve all respect and deserve to hold their real position they are seeking to achieve in different fields, just like men. I am confident that women will excel in any field; that’s what they proved in the past years.”