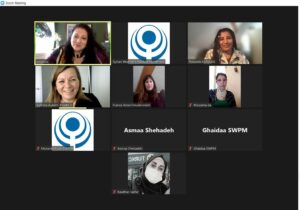 The Syrian Women’s Political Movement held a number of bilateral meetings on the sidelines of the Commission on the Status of Women 66 (CSW66), with countries’ envoys to the United Nations. These meetings were held between March 16, 2022, and May 13, 2022. The countries according to the date sequence of these meetings, are Canada, the United Nations, the United Kingdom, France, the European Union, Norway, Turkey, Ireland, Neatherland, Qatar and the USA.

In these meetings, the Syrian Women’s Political Movement was represented by its members who are inside Syria to be able to convey a vivid picture to the international community about the continuing grave violations against civilians. The meetings were also attended by members of the General Secretariat and members of the General Assembly present in many diaspora countries.

Throughout these meetings, the Syrian Women’s Political Movement was keen to convey the voices of Syrian women to decision-makers, by emphasizing the recommendations contained in the policy papers issued by the movement in consultation with approximately 500 Syrian women every year, who are inside Syria.

In these meetings, the Syrian Women’s Political Movement emphasized the need to end the suffering of detainees and forcibly disappeared and their families, by facilitating the relevant international committees’ access to all detention centres, official and unofficial, as well as the need to hold accountable all those involved in crimes and violations against humanity from all sides, by supporting the Personal Prosecution to file lawsuits outside Syria, in countries where laws allow this. In that context, the SWPM’s members stressed the need to support Syrian and international organizations working on the issue of accountability, as well as organizations interested in supporting women survivors of detention.

The Syrian Women’s Political Movement noted that some countries have deported Syrian refugees on the pretext that some parts of Syria are now safe. The SWPM’s members stressed the need for these countries to continue rejecting the return of refugees and participating in the reconstruction until a political solution is reached.

The Syrian Women’s Political Movement pointed out the difficult humanitarian and economic situation of the Syrian people, where 90% of the civilians live below the poverty line, and about 5 million Syrians in northern Syria need urgent humanitarian assistance. The SWPM stressed the need to extend the humanitarian aid mechanism across the border to Syria by increasing the humanitarian crossings.

On the international level, the Syrian Women’s Political Movement expressed during these meetings its sympathy and solidarity with the recent events against the Ukrainian people and the attacks on Ukrainian women. Syrian women, after 11 years of the Syrian war, realize the double suffering that women pay in war.

The SWPM’s members indicated through these meetings that to this day, 11 years after the start of the revolution, solutions and proposals to feminist issues in Syria are still emergency solutions, and perhaps we should think more to reach more sustainable solutions to feminist issues. Based on our need, as Syrian feminist politicians, for the necessity of women’s participation in the political process to build the future Syria and our keenness to build peace, we have suffered, and still are, from patriarchal political persecution by all the authorities of the de-facto forces deployed in Syria, and not only by the Syrian regime. We, therefore, hope that our voices will be heard because our goal is full and equal participation in peace processes and in addressing violations and hostilities against women.