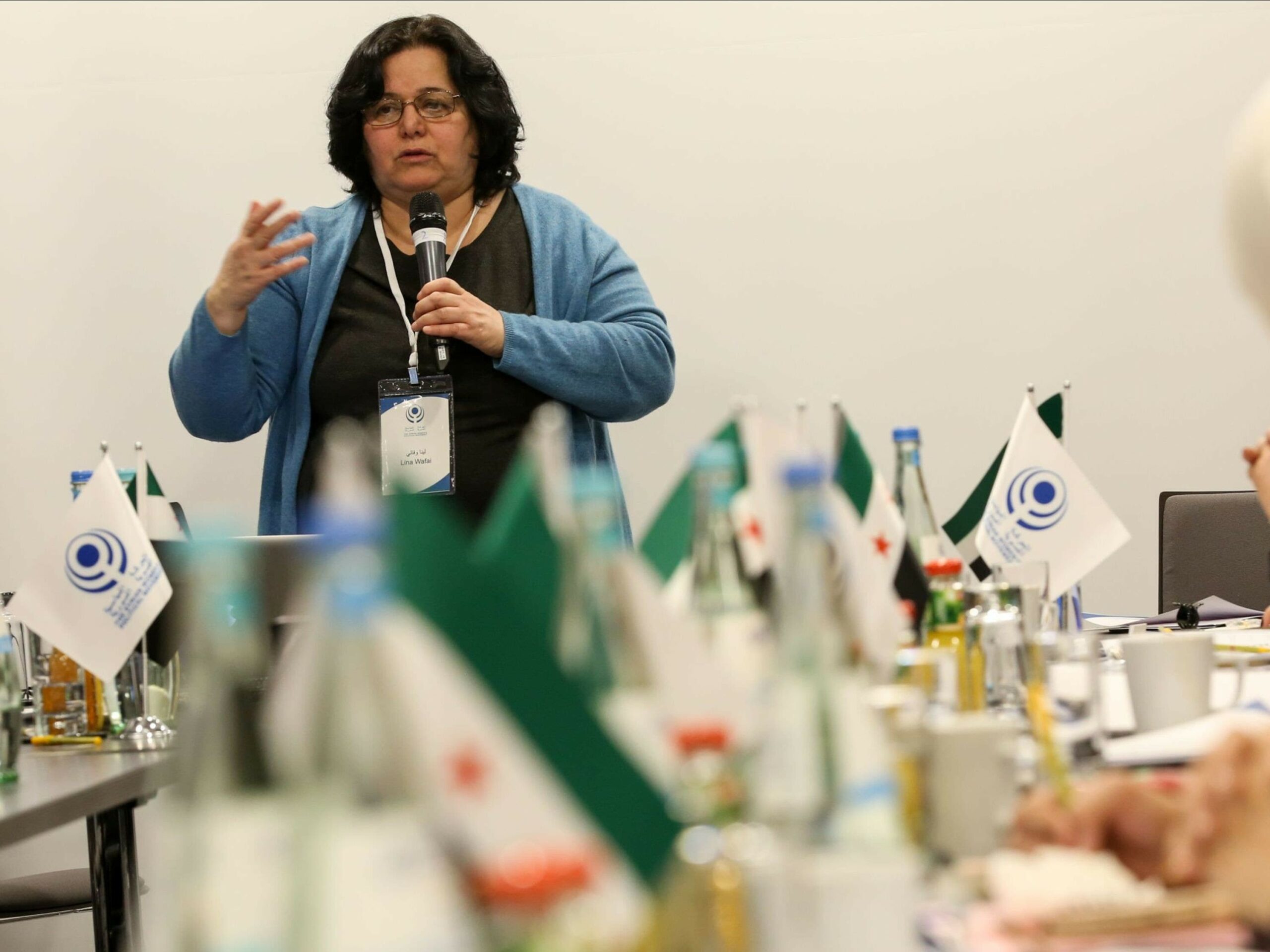 SWPM’s political vision states that “The only solution in Syria is a political solution that guarantees the unity of the Syrian territories and people and ensures the transition to a democratic pluralistic state; a state of complete and equal citizenship for all its citizens regardless of gender, religion, ethnicity or any other affiliation or categorization. A state that ensures peaceful rotation of power without any tyranny on its territories, whether by the Syrian regime or the different de facto forces, and without any foreign presence on Syrian soil, whether foreign sectarian militias or foreign fighters and armies.”


The Syrian revolution, a revolution of freedom and dignity, which erupted in 2011, was confronted by the regime with extreme violence, leading some of our people to take up arms to defend themselves. As a result of the excessive violence practiced by the Assad regime against the revolution, it turned into an unfortunate fierce war with regional and international ramifications. Syria became a combat field for an international and regional conflict fought through local proxies, with direct regional intervention or through supporting one of the proxies on the ground. This led to the existence of several foreign armies and militias on Syrian territories and Syria has become divided into zones of influence. Until today, fierce battles are taking place on the borders of those zones to reshape them; the most recent was the Syrian bombardment of the western countryside of Aleppo with the support of the Russians.

In light of the ongoing war that Syrian civilians are paying the highest price of, SWPM believes that the only solution in Syria is political one, as the military solution has proven its failure. Armed opposition couldn’t resolve the battle for its favor; actually they handed over some areas that were under their control either through unfair reconciliation agreements that were imposed on them, which led to the displacement of local civilians, or through withdrawals. In addition, the armed opposition is fragmented and so many factions are dependent on regional or international powers, in addition to the fact that terrorist’s dominance increased in their areas at the opposition’s cost. On the other hand, the regime which, with the support of its Russian and Iranian allies as well as the sectarian militias, restored the military control over large areas couldn’t bring those areas to normalcy or translate its military victory, it brags about, to a political one. In addition to the above, several foreign armies and sectarian militias have actual presence on Syrian soil, which makes Syria subject to a number of occupations.

As SWPM reiterates the importance of a political solution, it sees that such desired political solution which could establish sustainable peace, should be a solution that ensures full citizenship for all the citizens of the Syrian state, regardless of gender, religion or ethnicity; a democratic state that ensures the protection of plurality and difference, respects all opinions and ensures full rights of women by law and before the law. A state that ensures peaceful rotation of power through ballot boxes to guarantee an end of all forms tyranny and ensures that no new dictatorships will be formed.

In light of the divided zones of influence in Syria, the country came under several forms of tyranny. Each of those areas are under the control of a de facto authority that is dictatorial and authoritarian forces in general. Therefore, SWPM believes that the desired solution is a democratic state that ensures unity of Syrian territories, ends the control of warlords and de facto forces and gives equal rights to all Syrians, regardless of their different affiliations.

SWPM also believes that the desired solution cannot be achieved unless all foreign armies and militias are out of all Syrian territories, the issue of foreign fighters is solved and they are returned to their original countries, all Syrian territories are liberated from foreign influence and control and the national Syrian decision is restored.

SWPM believes that one of the items required in the desired comprehensive political solution is the formation of a genuinely national army that is not dependent on others, united throughout Syria, with Syrian national terms of reference and decision-making. An army that could end the proliferation of arms which exhausted the Syrian people everywhere. An army that makes its own decisions in a central national fashion within the framework of a comprehensive political solution, after reaching the desired citizenship state which has an inclusive Syrian identity.

The transformation of the Syrian revolution of freedom and dignity into a fierce war led to the fragmentation and loss of Syrian identity, as well as vertical societal divisions.

SWPM finds in a comprehensive political solution that leads to a democratic state, where all people are equal in their rights and obligations, a solution that can build the Syrian identity again, and create a new social contract that will allow the Syrian people to reach a level of genuine coexistence based on the concept of citizenship.

Such a comprehensive political solution should guarantee the right of refugees and IDPs to safe and voluntary return to their original homes, where their property rights are maintained. It should also end the phenomenon of displacement and demographic change that accompanied the Syrian war. A solution that could help reconstruct Syria, ensur the rights of everyone and take into consideration the necessity to prioritize the most severely war-affected areas.

A political solution that takes into consideration the suffering of Syrian women during the years of the revolution and war, including activists, detainees, survivors or mothers raising their children alone due to the absence of the husband because of the war. A solution that ensures a place for women in decision-making positions and drafts a constitution and laws that ensure her rights, so she can be equal to man by law and before the law. A solution that takes into account social problems women suffered from because of the long years of war, whether in terms of registering a marriage or a child they had, or in changing the fact that she had a productive role without having rights and guarantees.

In pursuit of such a comprehensive political solution, SWPM does its best, with the support of its allies and friends, to reach the goal of the desired Syria, a state of full citizenship.