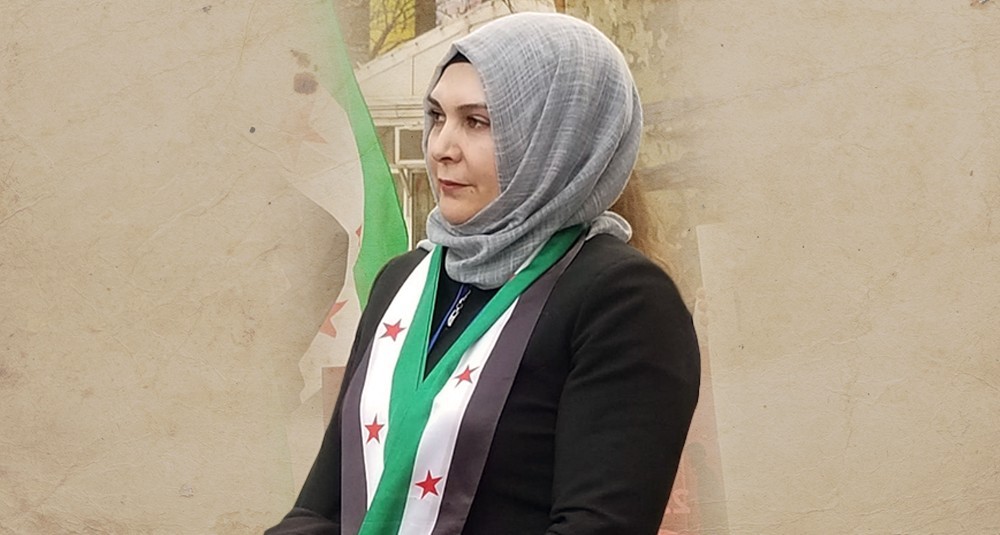 Women are Politicians by Nature

Ghalia participation in the revolution started with relief work; she used to go to the cities of al-Thawra and Raqqa after coordinating and communicating with activists there, to bring medicines. After the regime and its militia set up checkpoints in the area and it became difficult for activists to go to Raqqa in order to get medicines, because the very basic first aid were not available in Kafranbel, Ghalia used to take her children with her to facilitate her passage through checkpoints and not to attract attention to herself. As she said. Then she started to take part in protests and raise the revolution flag and banners, and march in funerals with other women.

Her rejection of a corrupt and dictator regime and her longing to live in freedom and dignity under just laws and fair government were the reasons for her engagement in the revolution in 2011. She says, however, that when the revolution deviated from its peaceful course in 2013 and started to turn into an armed revolution, Ghalia felt that women’s voice in the revolution was fading, and she began focusing on civil action, especially women’s issues. So she started with a group of women working on the idea of establishing Mazaya organization, which is the first women’s empowerment organization established during the revolution. The organization has several centers in different areas, offering professional and educational courses in addition to academic courses and awareness-raising lectures.

“Without political action and dialogue, women will not be able to communicate their voices and claim their rights. After years of war, killing and destruction, during which women have paid the highest price.”

Ghalia is in charge of the women office in Kafranbel, where she follows up all the centers and projects conducted by Mazaya. “We had no option but being one hand as women after our children have been martyred and displaced; our pain is one and our goal is one.” Ghalia says. She wasn’t interested at first in political work, and she was focusing only on civil work in the first three years of the revolution, until she realized that both lines are interconnected and that any domestic or international political change directly affect their work as civil society organizations and without political action and dialogue, women will not be able to communicate their voices and claim their rights. After years of war, killing and destruction, during which women have paid the highest price, Ghalia says; “this is a critical phase; it requires pure political work, therefore we, women, being the ones who build communities, we need to be part of this work. Even women at home, they are required to have enough political awareness. We women are politicians by nature.”

Ghalia believes that women were fought by both the regime and the revolution, by keeping them away from the political space, because women capacity to be in decision-making position has always been questioned. So they tried to marginalize and keep women away from politics. However, she considers Syrian women were able to impose their presence everywhere, despite all circumstances and restrictions.

“To continue defending our cause, we need to restore trust in each other and accept our differences because we have one goal.”

On joining SWPM, Ghalia says that she found that it reflects her ambitions and goals as a Syrian woman, and it is a nucleus of change for the future of Syrian women in general. She hopes the movement will be more supportive of women in the camps, whether they are on the borders with Lebanon, Jordan or Turkey, providing them with political lectures, and that SWPM will open offices in different places.

In order to continue defending our cause, Ghalia emphasizes the need to restore trust in each other and to accept our differences because we have one goal. One of the most beautiful moments of the revolution, Ghalia says, was when Mazaya Center honored more than 50 women, aged between 60 and 70, who participated in the protests and chanted for freedom, because she saw in the eyes of those women who have experienced the oppression and tyranny of Assad’s regime since 1980s, determination to continue, and hope for the future. As for difficult moments that Ghalia has experienced during the revolution, “it’s every moment I lost a relative or a friend” she says. However, Ghalia looks to the future with hope and determination to continue working in public affairs for a better future for Syrian children and youth who deserve to live in dignity and enjoy all human rights.

Ghalia dreams of a healthy Syria, healed from all the pains it has gone through. She dreams of a safe and democratic Syria, where we all accept and respect each other, and all citizens enjoy their freedom and the rights they have been denied for years.

“The only pity I have is for Syrian women, because they are the group that suffered the most from insecurity in recent years. They deserve to live in safety more than anyone else.” Ghalia says.