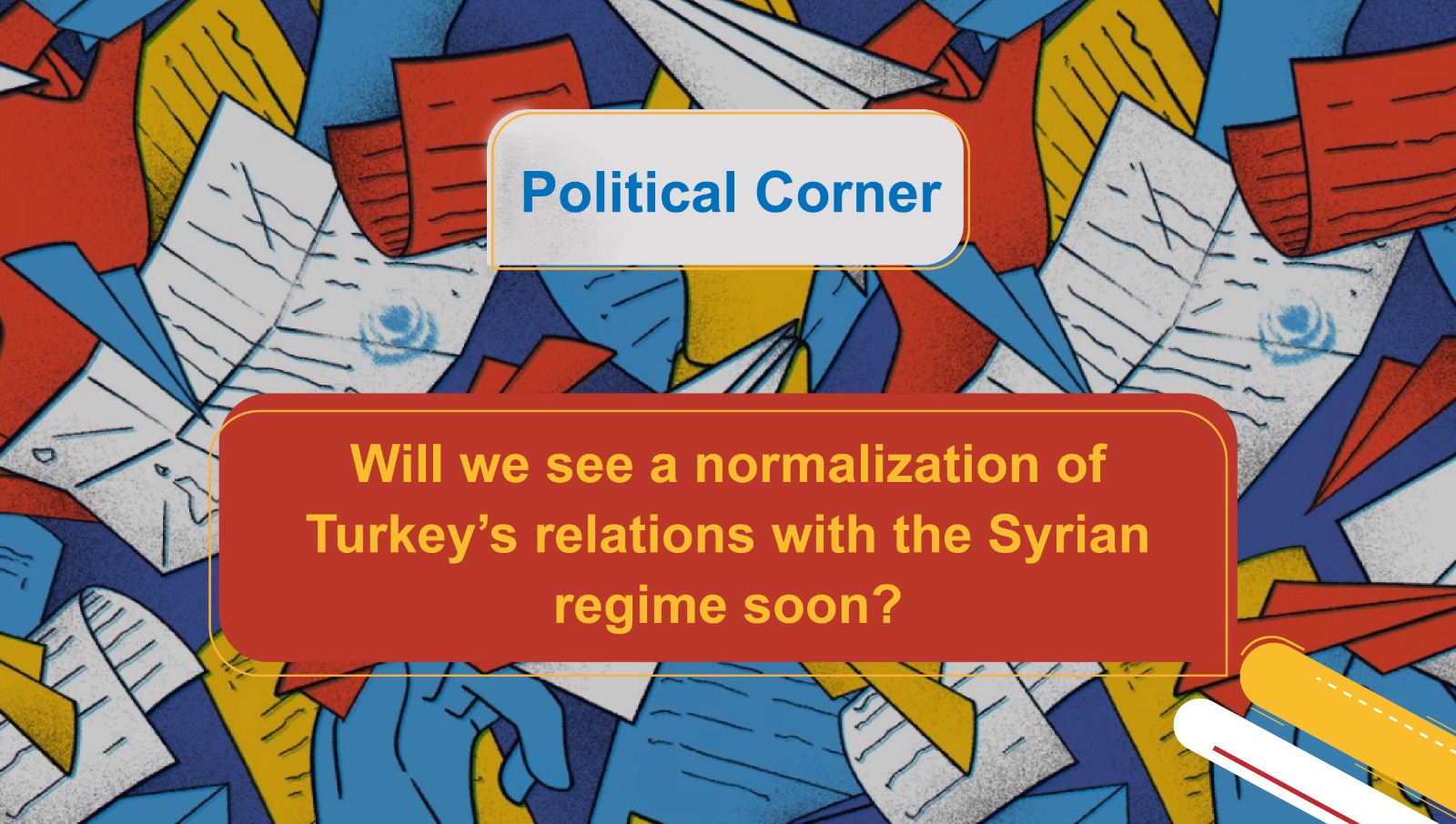 We write this political corner amidst a flurry of political activity. We cannot be sure if the relations between Turkey and the Syrian regime will have been normalized by the time this editorial comes out. Our aim here is to evaluate the repercussions of recent developments as much as possible.

The statements of the Turkish Foreign Minister, Mevlüt Çavuşoğlu, followed by statements by the Turkish President, Recep Tayyip Erdoğan, indicated that the relations between the two countries were about to be normalized soon. They further showed that communications between the two countries on the political level were not new nor were they the result of the recent tumultuous events on the international arena such as the war in Ukraine, Russian pressures on Turkey and the absence of the US. Rather, they stretch further back to the start of the Astana negotiations, and officially since the Sochi conference.

Politicians’ positions and promises often change after elections, and this applies to the current situation in Turkey. But this does not mean that a change in the Turkish position towards Syria has not already started through official channels. Intelligence and military cooperation between Ankara and Damascus has been going on openly and officially for a long time as confirmed by the Turkish president himself.

Although some countries have already resumed relations with the Syrian regime, these steps do not make a big difference in re-introducing Assad to the international community. However, a normalization of relations with Turkey is a real game-changer in this respect. It comes after the failure of the Russian and Iranian efforts to re-habilitate the Assad regime. These countries have exchanged visits with Assad and re-opened embassies in Damascus and tried to invite him to the Arab Summit meetings. This latter move was opposed by the host of the summit, Qatar, under US pressure, quoting human rights abuses and crimes against humanity as well as the issue of political detainees. Yet, if Turkey decides to recognize the legitimacy of the Syrian regime, this will be a major factor in ending the pariah state of Assad and encouraging more governments to resume political and economic relations with his regime.

We are fully aware that policies adopted by countries are governed by their interests and internal tensions. The main issue facing Turkey is the coming presidential elections, which are forcing the government to make populist decisions to win more votes. The refugee problem is an important bargaining chip in the hands of the Justice and Development Party and Erdoğan. This political card is being used internally amidst the rising racist sentiments against Syrian refugees, and externally as Turkey keeps the doors of migration to Europe and the rest of the world closed.

On the other hand, Turkey’s rapprochement with the Assad regime will not come free of charge. It will most likely be also accompanied by some face-saving conditions to justify it in front of the international community, the Syrian people, the Turkish public, and Erdoğan’s own party, especially in terms of the negotiations process. The two regimes also have a shared interest in the return of the displaced people, which would be a sign to the international community that the war has really ended and reconstruction needs to begin. Thus, funding will start to flow into the hands of the Syrian regime, which means a revival of its failing economy. Russia and Turkey also stand to benefit greatly from the reconstruction contracts, which is another point of interest for Turkey, with the regime giving Turkey guarantees of a safe return for refugees to the north of Syria. This key issue would be of great value for the Justice and Development Party in the face of their opponents by promising to repatriate Syrian refugees whose presence is a constant bone picked by the opposition. All of this would come at the expense of Turkey’s support for the Syrian people’s demands in getting rid of the head of the Syrian regime, preferring more modest changes in Assad’s policies only.

However, this is one thorny issue. The safe return of refugees requires a great deal of guarantees, as well as the creation of a real safe zone. The SWPM has serious concerns that this return would eventually be very similar to other instances of displacement inside Syria. We express our concern that such steps might amount to deliberate demographic change, and that they are likely to prove lacking in guarantees for refugees’ safety. Turkey’s deal from the settlement also needs to be made clear for everyone to see.

We are truly astonished that the official Syrian opposition has shown no response to the forced return of some Syrian refugees, which is being falsely advertised as voluntary return. The opposition has also failed to express a position regarding safe return and its conditions when it happens.

In our view, any refugee return program must be linked to a political solution, and must guarantee the existence of a safe and neutral region as it is the only way people will voluntarily accept to return.

Another major interest for Erdoğan is preventing, at any cost, the creation of a political entity that is linked to Kurdistan Workers’ Party (a.k.a PKK), considered by Turkey as a terrorist organization. Thus, Turkish policy would justify using any means to achieve this end, even if this means supporting certain steps taken by the Syrian regime against Syria Democratic Forces. After it failed to gain US consent to launch a military campaign against the PKK inside Syrian territory, Turkey is seeking a different strategy to achieve its aims with no holds barred.

The Turkish U-turn towards making peace with Assad has been pushed further by the Russian-Ukrainian war which changed the international scene dramatically and directly affected the Syrian crisis because the international players are the same in both cases. With this war taking center stage on the international arena, the Syrian file became less important. At the same time, Russian pressure on Turkey has increased, leading the latter to refuse signing up to international sanctions against the former. The two countries have strategic relations and their interests inside Syria overlap in several areas.

The SWPM understands that countries make policies based on their national interests, and acknowledges that any political settlement is strongly related to delicate worldwide balances, especially Russian-American understandings. Yet, we reiterate our demand that the political process must be resumed under UN patronage, along the Geneva track, with guarantees to fulfil UNSC resolutions 2254 and 2118 and the Geneva declaration. An essential component of transitional government is the constitutional track, which must be started now. We stress that any political solution will remain inadequate if it does not include accountability of war criminals from all sides. Thus, the peace process must include active and influential democratic Syrian powers in order to work on creating a modern Syria based on equal and full citizenship rights for everyone.

The Political Committee at the SWPM