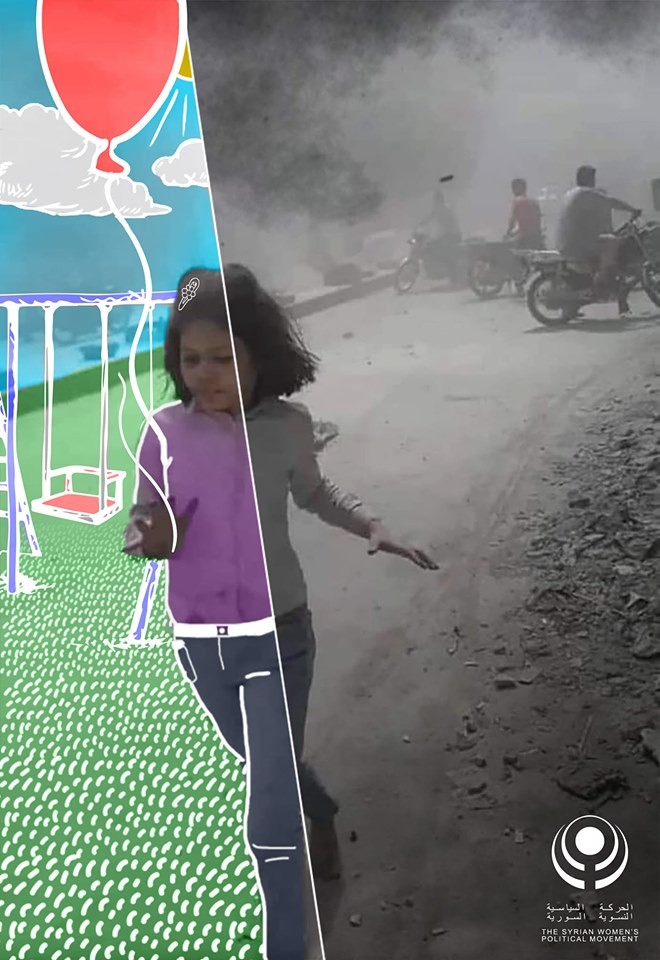 “When my family and I were displaced from Barzeh neighborhood in Damascus to Maarat Masreen in Idib, we rarely went out as we knew no one in this city. The distance between areas and our economic situation after the displacement didn’t make things easier.

After a while, I met a group of women and we planned our first picnic with our children, just a few days before the month of Ramadan. We were 6 women and 10 children. While the kids were playing around us, we heard the sound of a warplane. At first we tried to calm each other down by telling jokes as we’re all used to the sound of warplanes, but the warplane bombed an area that was very close to where we were sitting. One of the women carried her two kids and ran away. I tried to remain calm but the warplane didn’t stop at just one airstrike. Two more followed and that was when the panic set in.

We grabbed the children and ran towards a friend’s house. The airstrikes continued and this time I had a feeling that the strike hit close to my house. I started crying and screaming my husband’s name. The few minutes it took to for me to call him and for him to pick up felt like years. When he finally assured me that he was safe we decided that he would come and take us home. Even though we can’t protect one another from airstrikes we decided that it would feel better for all of us to be together in the same place.

We went back home and the warplane stopped bombing. I can’t describe my feeling when, after I thanked God that my family was safe, I found out that an entire family was buried under the rubble. The only survivor was a three-month-old baby, who is now being cared for by their neighbors.

After that day, my two-and-a-half-year-old daughter started having nightmares and became afraid of any sound during the day. She would say “mom, dad, the warplane came, we were playing, we were scared, it hit, boom, I’m scared..” For two weeks she wouldn’t stop saying these words and it broke my heart. I contemplated leaving the country to spare my kids this fear. It was a hard time for us, it still is. But what’s different today is that I decided to stay in Syria. I will not leave my country as my children are no more precious than the other children who live here. I will raise my children in Syria. I will teach them to love their country and to make sacrifices for it.”

Written by Basma al-Shami*, a member of the Syrian Women’s Political Movement

(Basma is a pseudonym used for security concerns).

Translated By @The Syria Campaign