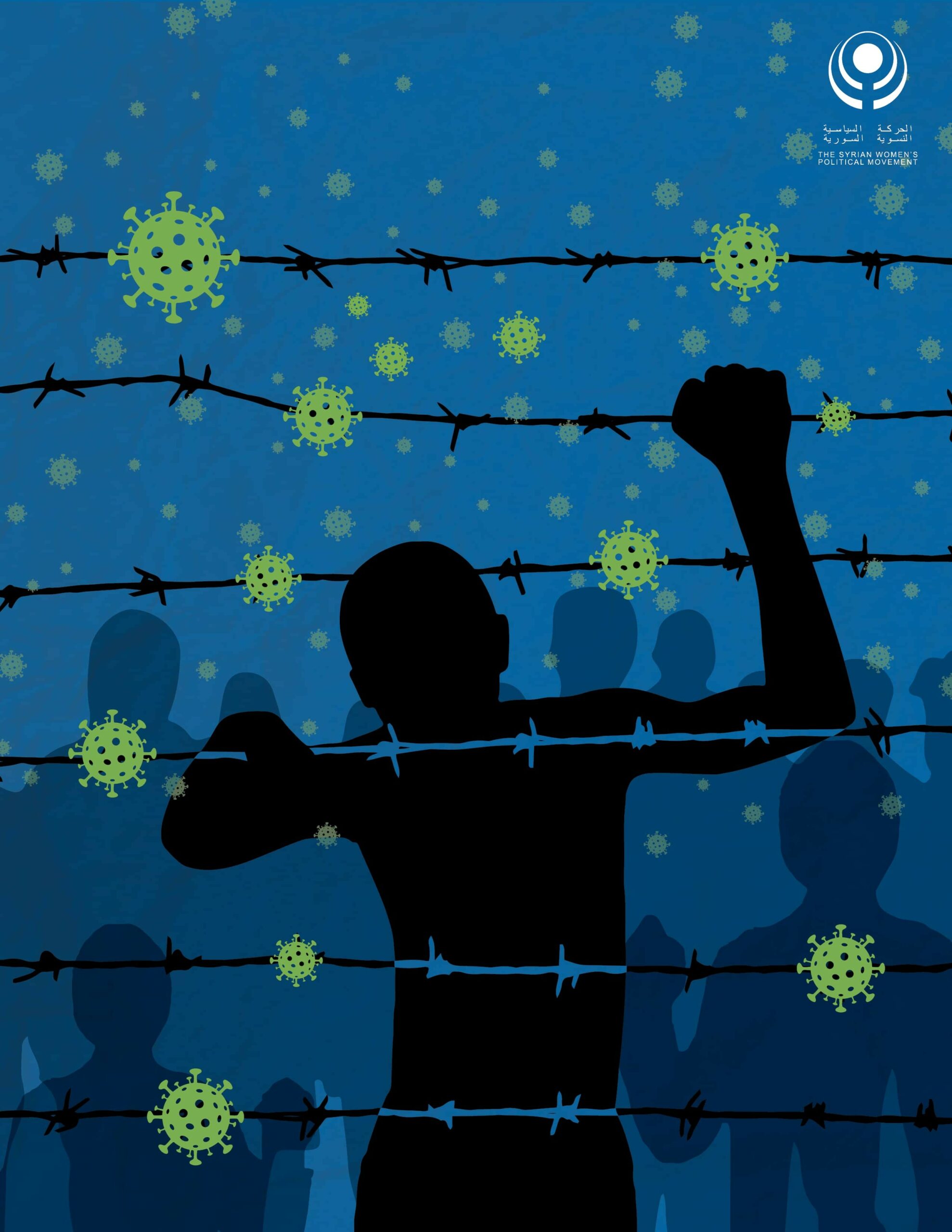 Several law and humanitarian organizations expressed concerns and flagged risks regarding the health conditions of thousands of detainees held in detentions that are beyond dreadful, extremely overcrowded with deliberate medical negligence and complete absence of basic hygiene measures.

“We call on the international community, WHO, International red crescent, and  concerned UN bodies to  practice pressure on the Syrian regime to reveal the fate of all detainees, and to immediately make detainees’ whereabouts public, and allow human rights groups and the International Committee of Red Cross to have direct access to them.” Said Marwan Al Ash, General secretary of the Syrian Committee for detainees said on a televised interview with Orient TV on 12 March 2020.

The horrific conditions in these detention centres are not new at all. Several reports had already tackled the issue. Coronavirus outbreak is only one article on a long list of health concerns regarding inhuman conditions these detainees are forced to endure.

“On 2012, The execution of 70 detainees in the 227-security branch due to the outbreak of plague was reported and documented in testimonies of former detainees” Al Ash added.

“at least 129,989 individuals are still detained or forcibly disappeared in the official and unofficial detention centres of the Syrian regime until March 2020.” The Syrian Network for Human Rights report on the 9th Anniversary of the Popular Uprising in Syria.

The Syrian Government repeatedly denied any confirmed case of Coronavirus in Syria and has not released any information about the possible spread of the disease within its borders so far.

Officials in Pakistan have blamed coronavirus cases on returnees from Syria since 14 confirmed cases in Pakistan were nationals returning from the Middle East, eight had a travel history that included Syria according to Syed Murad Ali Shah Chief Minister of Pakistan’s Sindh province.

The World Health Organization (WHO) on March 11 declared COVID-19 a pandemic, pointing to the over 118,000 cases of the coronavirus illness in over 110 countries and territories around the world and the sustained risk of further global spread.

The Syrian minister of health first and the only commentary on the outbreak of the Coronavirus was” The Syrian Army has decontaminated the Syrian soil from Germs” referring to the military progress the Syrian regime forces backed by the Russian Air Force achieved recently northern Syria against the rebel armed factions.

Listening to any of the Syrian government officials or spokespersons, one can hardly miss the sheer Military tone, logic, and rhetoric they adopt in their speech.

The “founding father regime”, “One ruler” and “one-party” regime confined the Syrian speeches to military counter-terrorism broken-record rhetoric that, given the benefit of the doubt, reflects no flexibility for ages.

“Syrian government security forces have arbitrarily arrested, forcibly disappeared and tortured detainees in their custody for decades. Between 1980 and 2000, the government of former President Hafez al-Assad was responsible for the enforced disappearance of an estimated 17,000 individuals in Syria”

The Syrian regime adopted several precautionary measures from Coronavirus, including suspending universities and schools and reducing the number of workers in the administrative public sector institutions. Yet, practice severe suppression and silencing policies against health concerns flagged by any Syrian health workers or concerned civil or humanitarian societies in Syria.

The Syrian Regime won’t neglect its long well-known policies of withholding information, lack of transparency, blackmailing the Syrian people with their safety and security.

Yet, The Coronavirus crisis shows, as previous examples of terrorism exporting, the Syrian regime complete willingness to export its crisis to neighbouring countries and the world. Only to, eventually, declare its amenity not only to its people but also to the citizens of the entire globe.

By the end of 2019, the U.S. issued a Syria sanctions bill as part of the National Defense Authorization Act (NDAA), the 2020 defence budget.

The act is named after a Syrian military photographer who leaked tens of thousands of gruesome pictures of 11,000 victims who were systematically tortured to death in the custody of the Syrian authorities since 2011.

In a report released in December 2015, the international monitoring group Human Rights Watch found these photos to be authentic and cited the most common causes of death as gastrointestinal infection, involving severe diarrhoea and dehydration; skin disease leading to infection; torture; mental distress that led detainees to refuse to eat and drink; and chronic diseases for which detainees did not receive the necessary medication or treatment.

Hundreds of documented testimonies submitted by hundreds of former detainees, witnesses, and prison officials all outlined the shocking atrocities committed by the Syrian regime against detainees.

Amnesty International released in 2016 its report “Human Slaughterhouse” on the  MASS HANGINGS AND EXTERMINATION AT SAYDNAYA PRISON, SYRIA.

The 48 pages report explored the detainees daily suffering inside this well-known Syrian prison.  In the course of its investigation, the organization interviewed 31 men who were detained at Saydnaya, prison officials, judges, lawyers, doctors who worked at Tishreen Military Hospital, experts and family members of people who were or still are detained at Saydnaya.

Detainees are also denied access to showers and adequate sanitation, which has led to the spread of infections and diseases such as scabies. As “Sameer” explained, “Almost all of us had scabies, lice, and diarrhoea. You couldn’t even touch yourself because you could give yourself an infection.”135 Diab, a human rights activist from Damascus, described his experience: “Scabies was the biggest problem. We were covered in red sores… If you got them on your butt, you couldn’t even sit down. They would be full of puss, and then when the puss exploded out, it would leave a hole behind that you can’t get rid of. It took me two years after I was released to get rid of these holes.”136 Anas, a farmer from northern Syria, described the infections that he and his cellmates experienced at Saydnaya: A terrible smell came from the toilet. But still, it was better than the smell coming from people with scabies. My cellmate had been beaten on his toes and had got some wounds from that, and they became infected in his toes and leg. The wounds were becoming black – he developed gangrene. The whole hallway could smell it. The guards stopped coming because of the smell. The doctor couldn’t even look at it. He said the legs would have to be amputated… He died on 17 April 2014, in front of me.137 Former detainees reported that the conditions in which they were held were so unsanitary that guards and doctors often wore protective clothing or masks. According to “Adnan”: “The guards would usually wear surgical masks over their mouths so that they wouldn’t get sick.”138 A former guard at Saydnaya confirmed this practice, saying, “The guards would wear surgical masks to stop them from getting diseases. You could get terrible diseases from the prisoners.” Human slaughterhouse, Amnesty International report, 2016”.

It is worth mentioning that Saydnaya is only one prison on a list of detention centres, be it official or secret which have never been open for inspection by independent local and international organisations, including the International Committee of the Red Cross. Allowing Assad’s regime to turn these detention centres to a graveyard for thousands of civilians the majority of whom is peaceful opponents of the government such as demonstrators, human rights defenders and political dissidents; individuals considered to be disloyal to the government such as journalists, doctors who treated demonstrators and members of the military; and family members of wanted individuals.

Iran has temporarily released tens of thousands of prisoners in recent weeks in an effort to stop the spread of coronavirus. Activists were hoping the Syrian regime would follow suit.

Finally, Activists called on the Syrian regime to immediately release detainees’ records, their whereabouts and their health conditions. Also, called on the international community to consider this case of top priority, and held the Syrian regime accountable for any more health complications which could lead to mass deaths and to consider any delay as a deliberate attempt to liquidate its opponents.