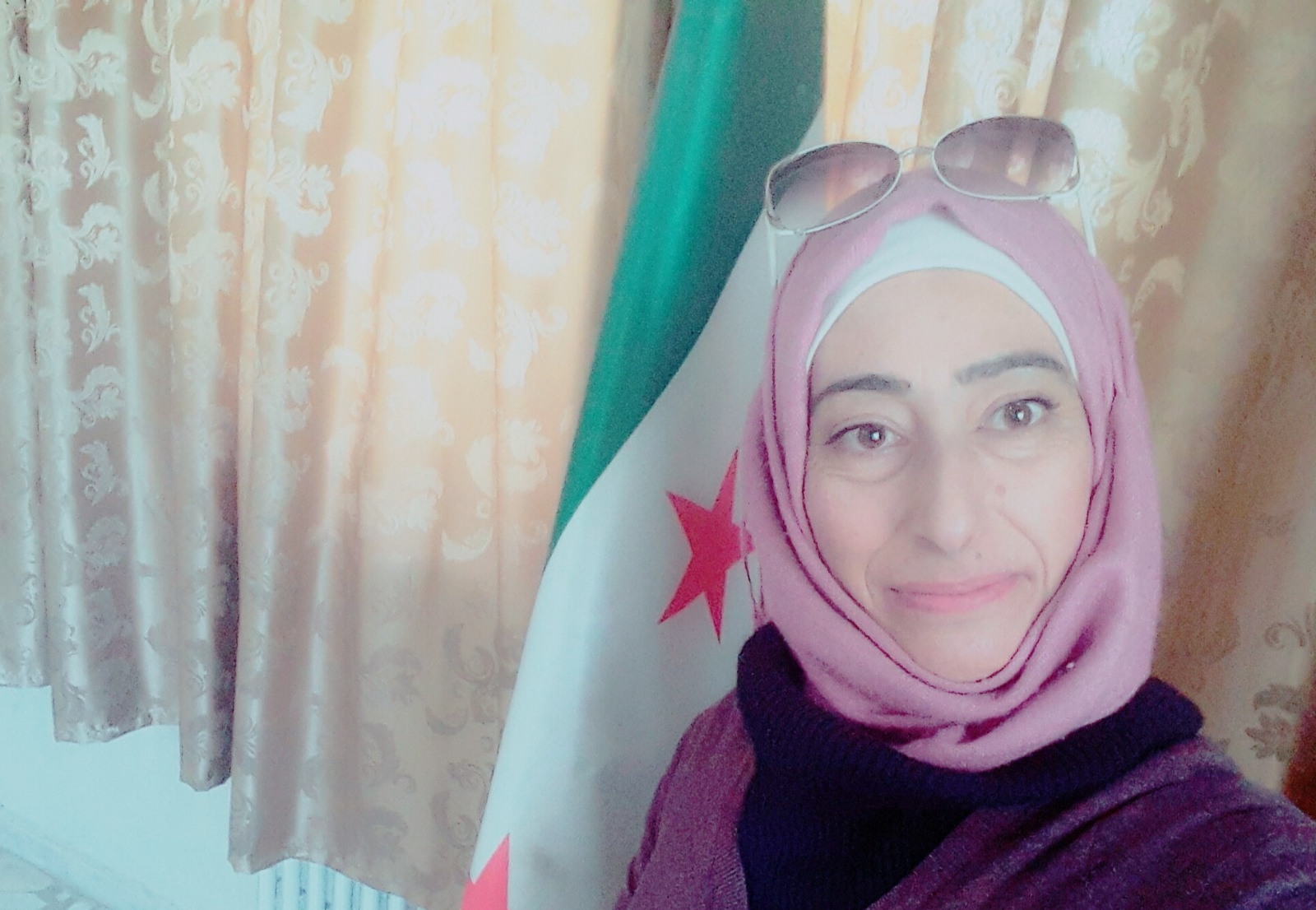 Abeer Hussein lived in the city of Damascus until 2015 when she moved to live in the countryside of Aleppo. She holds a master’s degree in Political Thought and is a lecturer at the Faculty of Political Science in the Liberated Aleppo University. She holds three “Train the Trainer” certificates from UN organizations which qualified her to work as a trainer in the field of humanitarian aid, especially in women’s protection from gender-based violence. She is also a trainer in political issues. Currently preparing for a PhD in International Relations, Abeer is a member of the SWPM.

When the Revolution broke out in 2011, Abeer was living in Damascus. “It was a scary time,” she says. “The state security forces were holding a strong grip on everything. I was closely following the peaceful demonstrations with a mixture of caution and fear, while hoping deep inside that the Revolution would lead to a better life based on freedom, dignity and human rights. I wished then, and I still do now, that the world would take our demands seriously and help us attain them. As the crackdown increased, and having been arrested and interrogated several times, I decided to leave Damascus as soon as I finished my master’s degree. I moved to Aleppo countryside in 2015. I have been active in the Syrian Revolution since then.”

It was not an easy task for Abeer to leave Damascus, “the city of my dreams, my future and my happiness,” as she puts it. However, the experience of being arrested more than once represented a real threat to her life, especially because she was studying politics which was a sensitive topic at the time. Abeer found no problem settling in because of the kind and welcoming nature of the new community. “But leaving Damascus,” she comments, “has left an indelible scar in my heart. I still dream of returning.”

“The SWPM is an important outlet for women who wish to be involved in making a change for the better. In addition, working with the SWPM increases out faith in our potential as women to be politically active in a way that helps us make a positive contribution.”

Working in politics is not a new thing for Abeer, because she has been interested in politics for a long time and she even studied it at university. However, this theoretical interest was translated into actual activism after the breakout of the Revolution. “It became the fate of every Syrian woman and man to work in politics or be invested in it,” she says. “We are part of a popular revolution that changed the fates of everyone involved.”

Regarding the challenges facing political activism in Syria, Abeer says, “Before 2011, these challenges were mainly caused by the lack of any real political participation and the absence of people’s involvement in decision-making. The ruling elite held a monopoly over political decisions. There were no political bodies to promote civic involvement and spread political awareness. All of this was caused by the authoritarian nature of the regime which suffocated all aspects of life, including political life. After 2011, difficulties arose due to the lack of the necessary political acumen to effect a change that would benefit the Syrian people and their just cause. Again, one can only blame the regime which prevented any form of political experience or awareness as part of its efforts to suppress the people and rule them. Another challenge is that there is no fair and just support for the Syrian Revolution. There is a clear bias towards the regime because it serves clear interests for several international stakeholders. As a result, the Syrian Revolution has not been treated fairly till this very day.”

Women working in politics face more challenges, Abeer elaborates. Women have suffered all the aforementioned challenges because they are part of a society ruled by a dictatorship. In addition, women face societal challenges that hinder their advancement and work in the public sphere.

Regarding her motive for joining the SWPM, Abeer says, “I wanted to find an outlet to practice spreading awareness and political experience which are the groundworks for effective political engagement. The SWPM is an important outlet for women who wish to be involved in making a change for the better. In addition, working with the SWPM increases out faith in our potential as women to be politically active in a way that helps us make a positive contribution.”

Talking about the beginnings of the Revolution and how they compare to the current climate, Abeer says, “after all the major setbacks that the Revolution has been through, I don’t believe that the initial principles of the Revolution have died, so to speak. I would say that they have changed. The Syrian people live in different circumstances and the ways they continue the struggle have become very diverse. Syrian political bodies, such as the SWPM, need to act now and play a role in reviving the principles of the Revolution. The SWPM is in a unique position to achieve this because it is an open space for dialog, debate, and finding solutions for crises based on data and the latest developments. It hosts a great array of qualified people who are capable of effecting a change. We as members of the SWPM have the flexibility and resilience to do this.”

The Syria of her dreams, Abeer says, is “where one can lead a free, safe and dignified life. It is a place where the human being is value No. 1. All the country’s institutions work on providing people with a decent life, with freedom of expression and equality. The successive governments must also hold the human being as their most valuable asset.”

Abeer says to the women of Syria, “You are part of the Revolution and, therefore, you are part of Syria’s future. Despite the difficulties, I do believe in our ability as women and in our strong will. You are creators of life and makers of human beings, and it is not a stretch to see you re-create our great country, which can only be restored to its former glory by the combined efforts of its women and men alike.”

During the past ten years, the vast majority of Syrians have been through difficult experiences, some of which had positive aspects. Thinking about the positive experience she has had, Abeer says, “Positive experiences came from my work, activism and success in benefiting others. As a trainer and a university lecturer, any form of knowledge I pass to Syrian women and men is a personal success for me. Thus, I am often overwhelmed with joy whenever I succeed in helping someone change their wrong ideas or beliefs. Sharing knowledge with others is my main source of happiness. In addition, I am extremely proud when I see more young women and men opting to study politics, out of their wish to be effectively involved in politics through properly understanding the historical, sociological and economic factors influencing the lives of everyone, regardless of their interest in politics.