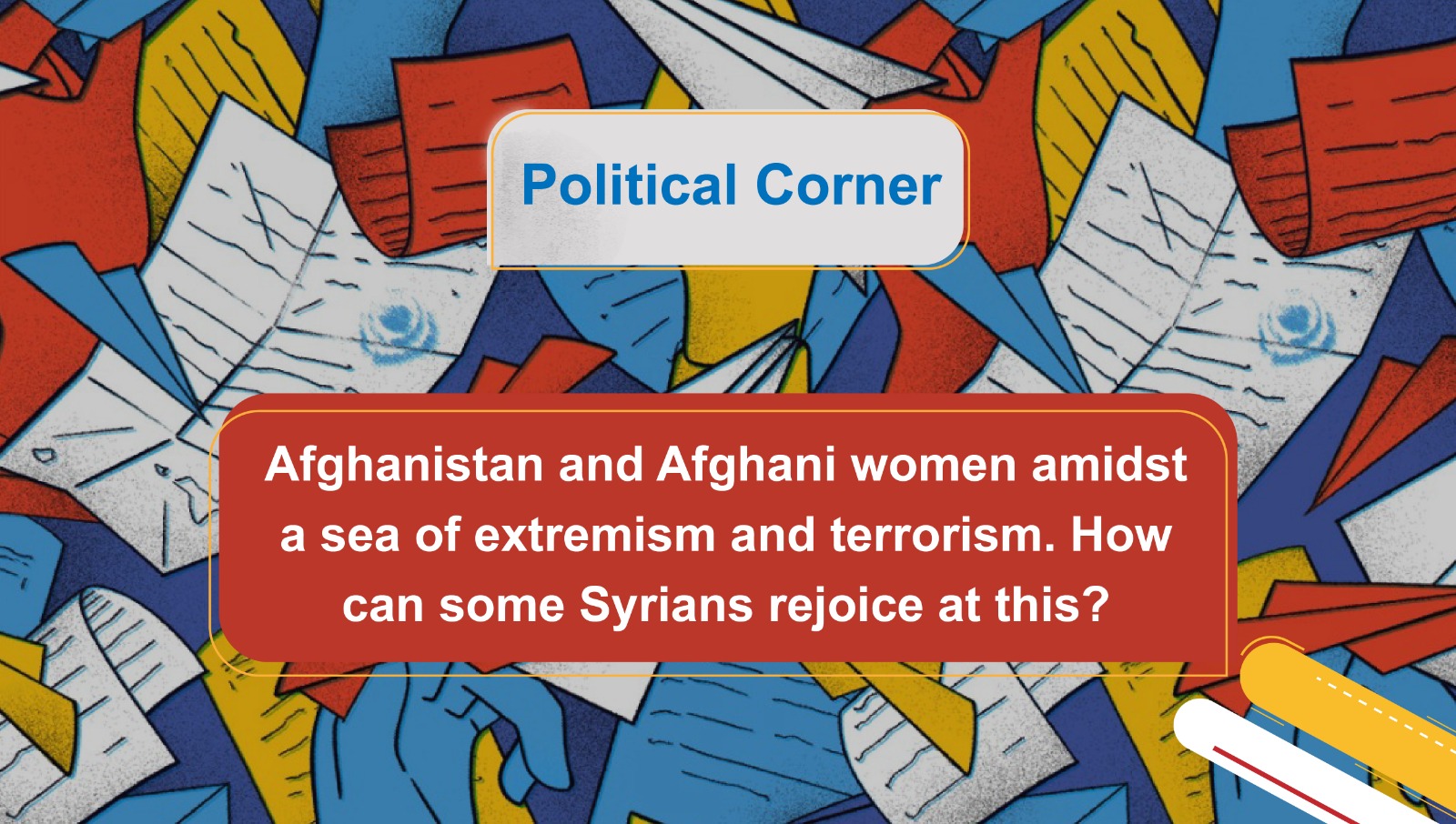 Afghanistan and Afghani women amidst a sea of extremism and terrorism. How can some Syrians rejoice at this?

Twenty years of US military presence in Afghanistan has recently ended. American forces withdrew from the country leaving the Taliban much more than military equipment and weapons. They have left the biometric information that could endanger the lives of thousands of Afghani men and women. They also left a general feeling of despair which is a suitable breeding ground for terrorism and extremism. There has been rumors that the US had reached some agreements to hand over Afghanistan to the Taliban. However, it seems that by negotiating with an extremist group under the assumption that it can be rehabilitated and humanized, the Americans have overlooked the fact that most other international terrorist organizations like Al-Qaeda and IS are waiting for such a weak spot to become available so that they can move in and turn it into a launchpad for their global holy war.

The recent developments have reminded the Syrians of the occupation of the city of Raqqa by Da‘esh who proclaimed the city their capital. The group had benefited from the unholy war waged by the Syrian regime against its own people, as well as the fragmented status of the Free Syrian Army, and above all the feelings of injustice left by decades of oppression. The news coming from Afghanistan has made many Syrians apprehensive as they sensed an international inclination towards cleaning up the image of political Islam and rehabilitating extremist groups such as Hay’at Tahrir al-Sham (HTS).

The American withdrawal from Afghanistan poses many questions about the future of our predominantly-Muslim region as a whole, and what fate awaits us if we are forced to choose between a tyrannical regime and extremist organizations. Syrians have been rightfully shocked at the scenes of jubilation in Idlib at Taliban’s victory. Especially disconcerting were the statements issued by HTS and The Islamic Front who saw the events in Afghanistan as a triumph for Islam and a defeat for the US. They even expressed the view that this success could lead to the defeat of Iran in Syria.

Taliban’s quick storming of the capital Kabul is not just a defeat for the US military; it is a defeat for the principles of the US and its allies. The Americans do not seem to have gone into Afghanistan to educate girls, build the infrastructure or empower a democratic state. Rather, their aims seem to have been taking revenge over the attack on the WTC towers and punishing Taliban for refusing to extradite Osama bin Laden who ordered the infamous terrorist attacks. However, the 20-year-long US presence was a chance to curb Taliban’s powers and revive Afghani people’s hopes in living free from extremism in a country that respected human rights and liberated women. The ratio of working women in Afghanistan had reached 22% which, while low, was a good and promising improvement compared to the conditions under Taliban before 2001. Today, Afghani women are preparing once more to enter a prison-like life behind their burqas, which are a Taliban invention that came to summarize their hostile policies and attitude towards women in general.

The biggest losers are, therefore, Afghani women, and the real defeat is a moral one for the Americans and their allies who left the country to face a bleak fate. Under such circumstances, it seems that Afghani women are once more left with no choice other than determination and resistance. The latter can only happen if an anti-terrorism, anti-Taliban force is formed inside Afghanistan. Such an endeavor, however, requires international support and solidarity because the cause of Afghani women is the cause of every human being striving for freedom, justice and peace, and their triumph is our triumph. Syria, a country ravaged by political oppression, armed groups and extremism, seems to be facing similarly difficult choices. Syrian women and men are becoming more and more desperate. The events in Afghanistan came to warn Syrians against a similar fate. Many Syrians have experienced the terrorism of IS and the oppression of other extremist groups. They had already suffered the state terrorism of a regime that killed, displaced and impoverished them. Thus, the question that begs to be answered is the following: are we going to be asked to choose between oppression and extremism? Surely, there is a third choice that we can still work on. Syrian women and men can take a firm stance against both options and build a democratic, patriotic and pluralistic body that works on ending the two forms of tyranny and establishing a country of equal citizenship and diversity, a country that respects and celebrates human rights and takes pride in the achievements of its women and fully respects their rights.