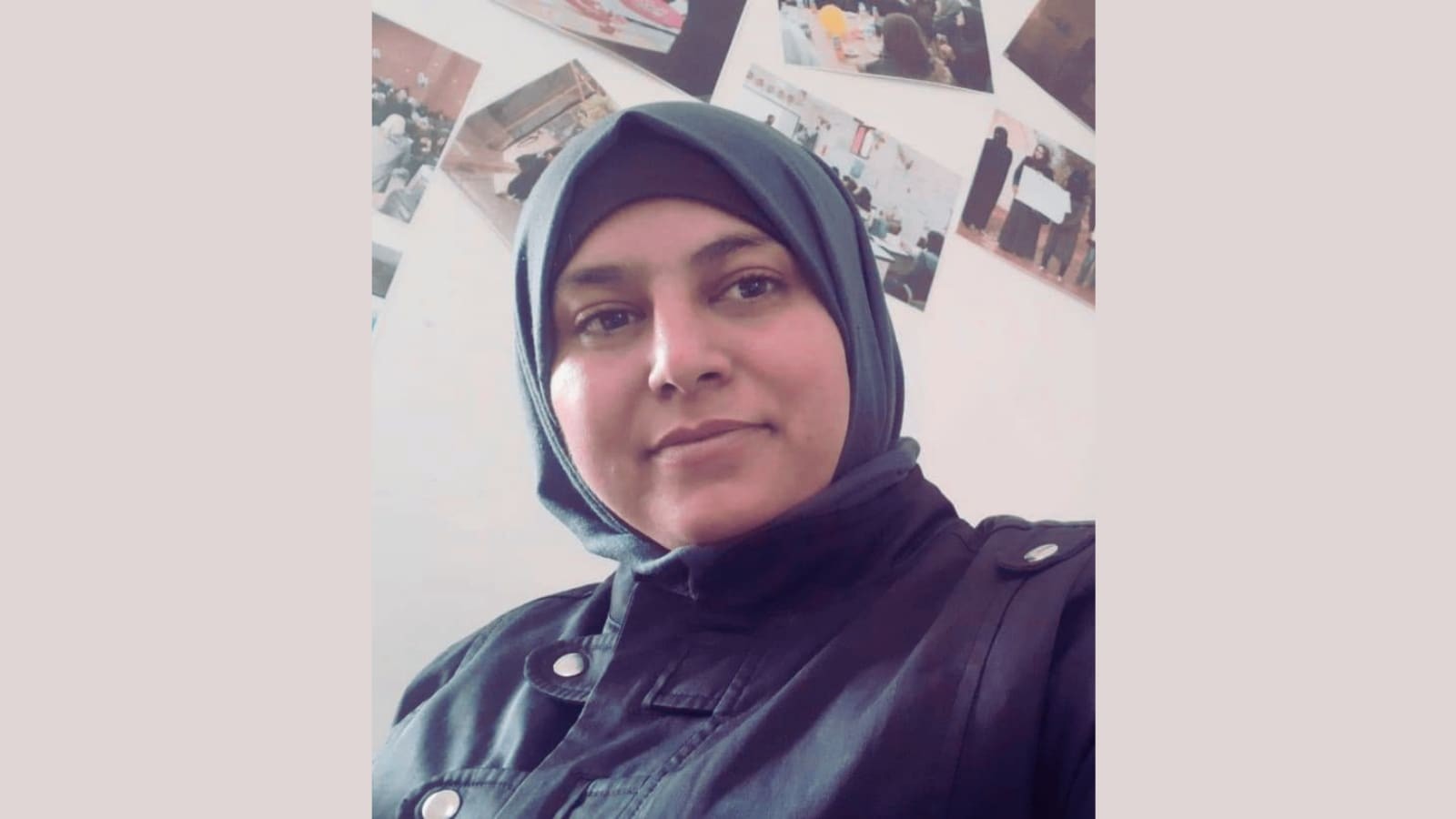 Alia Ahmad was born in the western countryside of Aleppo. She studied economics in Aleppo University and got her diploma in computer sciences. She worked in the banking sector and in export and import in Aleppo. After the eruption of the Syrian revolution in 2011, she got involved in humanitarian assistance. Right now, she works in the Stabilization Committee’s office of women empowerment.

Alia is a mother of four children and is currently living in the northern countryside of Aleppo. After 2011, Alia started to work from home documenting the names of martyrs and detainees. “since our community is somewhat conservative, engagement in works and activities requiring going out of home was not easy,” Alia says, “so I started to work on the close circle and my family to convince them of the importance of the role of women in the revolution.”

By time, the level of violence increased and the area she was living in was exposed to attacks by Syrian Democratic Forces (SDF) on one front and ISIS members on another front. “Many of my family members were detained, so it was important to pay more attention to my family and provide psychological support for mothers and fathers within my family to help them deal with the idea of the detention of their sons and daughters.” Alia says, “this personal experience with psychological support and the positive impact it left on my relatives, made me believe more in working in the provision of psycho-social support, especially for women and children, under the conditions of war.”

In 2018, Alia joined the working group of the Stabilization Committee and she started with the team to work on empowering women.

Back to 2011, talking about her motive to join the revolution, Alia says: “after graduation I was confronted with the reality of corruption and nepotism we were having in Syria, so I started asking myself questions related to the governing regime in my country and the notions of equality and citizenship. So my participation in the revolution came as a result of the wish to change that reality.

Talking about her interest in politics Alia says: “I got involved in politics motivated by a question on the role of Syrian women in the decision-making process? Women have always been stereotyped by the society, as if they are not competent to work in politics, although the reality proves that we have women in our society who are no less than men and well-equipped with knowledge and practical experience.” Alia adds: “We started as women to communicate and network with each other, from both inside and outside Syria, to benefit from the experience of each other and support our cause. Today I can say that there has been a quantum leap in the past eight years. The position of women in political or administrative work started to crystalize, all thanks to the collective feminist work.”

On the challenges facing political work in Syria Alia says: “we can’t deny the fact that the majority of the Syrian people was absented from politics for almost five decades. Today, work in politics lacks transparency. In addition, the political bodies are repetitive of the same thing and they are not open to keep up with the changes. I think the lack of coordination among the political bodies and not opening the space for new voices and names to hold political positions weakens political performance in general and diminishes the trust of people in those bodies.”

“I like the idea that the members of SWPM are almost identically like me in some points and completely at odds on other points. This diversity is an added value for increasing the horizon of the work.”

When it comes to challenges facing Syrian women in the political field, Alia believes that the first challenge is related to the lack of political awareness or political illiteracy, in addition to the lack of efforts that empower women politically and build their capacity. “societal constraints on women delayed the presence of women in the political domain.” Alia adds. However, the current problem that Alia believes is present in some institutions and groups involved in the political and empowerment domains are exclusion and bullying. So certain voices that are not in line with some groups are being excluded.

Alia speaks about joining SWPM: “due to my work on empowering women socially and politically, I am convinced that I always need to improve myself and enrich my knowledge. This goal can only be achieved through communicating and benefiting from the experience of other Syrian women and men who are involved in the political and feminist domains and have experience in these fields. As I was searching for such platforms, I found SWPM, so I explored its goals, working mechanisms and members, so I found that it is the most appropriate body to join, especially that it is a feminist group that includes male and female members from both inside and outside Syria. She adds: “I like the idea that the members of SWPM are almost identically like me in some points and completely at odds on other points. This diversity is an added value for increasing the horizon of the work.”

Alia sees that SWPM has visible activity on the ground inside Syria. “SWPM keeps up with the events inside Syria and is always the first to communicate the voices of civilians to decision-making circles and contributes to shed light on the causes of those people and finds ways to help them. Alia gives some examples on the activity of SWPM, such as supporting the resolutions or items that serve Syrians, such as Geneva resolution 2254, as well as raising the issue of the displaced and besieged men and women at the UN Security Council.

Alia thinks that to achieve the goals of the revolution and fulfil healthy political working environment, personal disputes should be put aside, and trust in institutional work should be built so institutions becomes the terms of reference rather than individuals. she adds that right now communication has become a necessity, to listen to all parties and be open to discussion without exclusion, so far as all of that is happening under our terms of reference and umbrella, namely the revolution.

What motivates Alia to continue working in public affairs is her recognition that the rightful cause for which the Syrian people revolted is a daily reality that couldn’t be overlooked. The Syrian public affair became personal affair and intimate to the life and future of every individual. “When I feel frustrated, I think about the children of Syria. Who will ensure their rights in the future? I also think of Syrian women who experienced the bitterness of displacement and loss; who will communicate their voices?” Alia says.

“Currently, communication has become a necessity, to listen to all parties and be open to discussion without exclusion, so far as all of that is happening under our terms of reference and umbrella, namely the revolution.”

One of the hardest moments that Alia lived in the past eight years, as she says “I left the city of Aleppo and moved to the countryside in 2011. After some time, I passed through the city, and I found it a different place from the one I knew before. I saw the city I had known and loved and which had a lot of my memories destroyed. This is one of the hardest memories, in addition to the emerge of ISIS in our area who removed the flag or revolution and painted our area in black, detained and killed our young men and women.

On the other hand, Alia recalls a nice memory she had, which is a meeting that brought 150 women from different areas from the north of Syria to discuss their issues, needs and the possibility of cooperation among them.

About Syria that she dreams of, Alia says: “I dream of a Syria that is a state of rights and equality; a state that draws its laws from a constitution drafted and agreed among by the Syrian people, which ensures a democratic, pluralistic Syria that guarantees freedom of expression and respects human rights.”

Alia address Syrian women saying to them: “I see in you the bright side of the future of Syria. You are the safety valve for your families, children and Syria.”