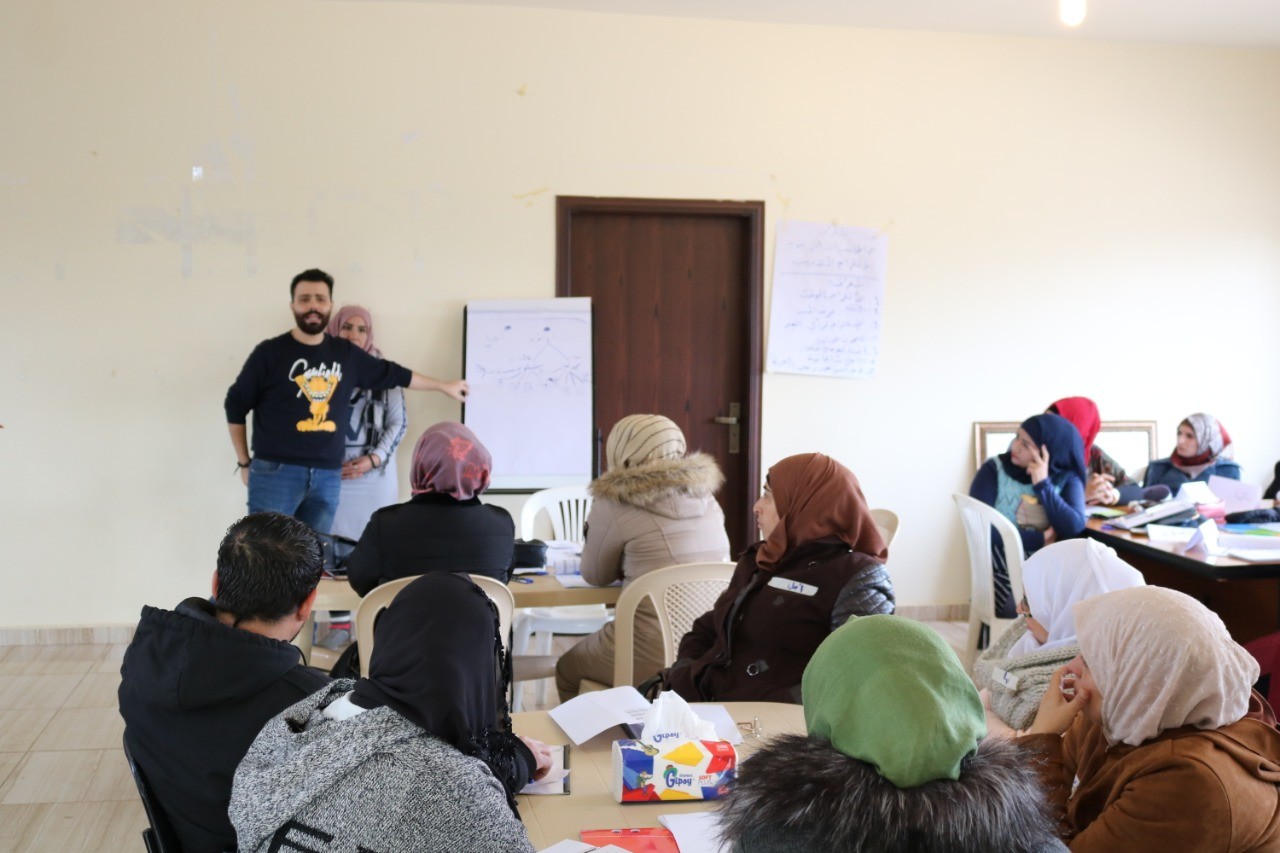 The challenges facing women in political work are double

After finishing architecture, Anas chose to study a master’s degree in Beirut with a specialization called (city socio-anthropology) or urban sociology. Anas says: despite my study in engineering, I did not work as an engineer after my graduation in 2013, given the circumstances of the war in Syria and the prohibition of practicing a “first-class” profession, such as engineering and medicine, by Syrian women and men in Lebanon. Anas adds: I used some of my experience in design and social work programs and volunteered with several humanitarian organizations, including Women Now for Development, as a psychosocial supporter for adolescents and children and then as a computer trainer for women participating in empowerment programs, before I assume my duties as empowerment program officer, and recently the advocacy and communication officer.

Anas also trains with the “Citizenship Association” that works on the concepts of transitional justice, citizenship, cultural diversity and gender issues.

On his current relationship with Syria, Anas says: over time, in my memory Syria has turned into a violent place ruled by criminals, and for me homeland is no longer confined to a geographic space; homeland is the citizens, relations and the interaction between them, and most of these are abroad now. Anas continues: before the revolution, I did not feel a real affiliation with Syria, because our rights were stolen and governed by nepotism. My belonging was to my small social community.

At the start of the revolution, Anas, at first, did not believe that Syrian women and men did indeed decide to challenge the security grip, especially that the state TV was lying and denying the demonstrations while social media confirmed and documented them, until demonstrations reached Zamalka where he was living so he participated in them.

On his motive to participate in the revolution, Anas says: my main motivation was not having a sense of belonging to the Syrian state; as Syrians, we were always exposed to extortion and violations of dignity as well as corruption, in addition to that, I saw for myself how peaceful the protests were at the beginning in my surrounding, there was nothing to prevent me from participating, and day after day my belief and faith in this revolution increased.

“I dream of Syria free from military and religious tyranny, where all parties accept their differences and live with each other within the parameters of equality and citizenship .”

Anas recalls a painful story in 2012, when he, his family and relatives were displaced to his relatives’ home in Damascus. One day, his sixty year old father went out to check on their home in Zamalka and he went away for five days before the family discovered that he was killed by the regime militants in his home.

On his departure from Syria to Lebanon, Anas says: I went to Lebanon to cross to Turkey to participate in a workshop, and I was supposed to return to Syria but my family warned me and there were security questions about me as soon as I left, so all this prevented me from returning. In addition, I was previously arrested and tortured twice in Palestine branch and military security 215 during 2011 and 2012, due to my participation in peaceful demonstrations.

In Lebanon, Anas describes difficulties of another kind that he and many Syrians faced, such as preventing them from practicing their basic professions, as Syrians in Lebanon are expected to be farmers, construction workers or cleaning workers, otherwise, he will be held accountable, in addition to the difficulty of obtaining and renewing the residency permits of Syrians, and this takes us to the nightmare of forced eviction that accompanies me and many others because of the proximity of the Syrian border and the easy transfer of people between the two countries.

Anas’ interest in political work started late, as politics in Syria was not an honest field and politicians who branded this field contributed to repulsive attributes, as Anas says. He adds: I got involved in politics through my growing relationship with the civil society through my civil activity and my work on societal change, gender equality, feminist approach, human rights, citizenship and transitional justice, this kind of noble politics, so to speak.

On the challenges that political action faces in Syria, Anas says: The main challenge is the monopoly of the authority to the political action, and yet despite the slight change that occurred in our favor in this field, the Syrian authority does not want us as Syrians to engage ourselves in political affairs, and on the other hand, the opposition has not been able to offer a political alternative to the revolutionary demands and monopolized the political decision in some way.

As for the challenges facing women in political action, Anas considers them double and explains: the exclusion of women comes from the two parties, the regime and the opposition, as they are both masculine, and this can be seen clearly through the delegations that represent the two parties in political negotiations where the percentage of women representation in these delegations is small, especially from the opposition side, and the representation is often women not feminists. Adding to this the society that prevents women from accessing their rights to education and work and restricting them to their “biological” function, and contributed to hiding their voices for decades, not to forget the discriminatory laws that prejudice women, such as inheritance, citizenship and what is called “honorable motives” and others.

On the reasons of joining the “Syrian Women Political Movement” Anas says: I grew up in a family where masculanity is somehow absent, then I joined a feminist organization like “Women Now” and started working with Syrian women, and my interest in the work of civil society and human rights, all this helped me to note the gender gap between Syrian women and men and the need to work to bridge them. Joining the Movement happened due to my belief in this political body led by women with the participation of supportive men. The movement, with its female and male members, can reach decision-making positions, and in the worst case, if this does not happen soon, at least this Movement has created a network of Syrian women from different backgrounds, active in Syria and abroad and have a unified vision.

“Syrian women are expected to continue the struggle to regain their rights. They should all realize that their rights are incomplete, and only with their hands they can get them.”

For Anas, applying the values ​​of justice and equality in practice and in daily life, and not only in awareness sessions, would create real change and achieve what the revolution came out mainly for, and as an individual I see myself responsible for contributing to the establishment of these values.

On Syria he dreams of, Anas says: I dream of Syria free from military and religious tyranny, where all parties accept their differences and live with each other within the parameters of equality and citizenship.

And for Syrian women, Anas says: Syrian women are expected to continue the struggle to regain their rights. They should all realize that their rights are incomplete, and only with their hands they can get them.

There were difficult situations Anas experienced during the past eight years, including the death of his father in 2012, the death of his friend in detention, and his responsibility for conveying the news of his death to his family.

As for one of the most beautiful moments that Anas lived during the past years, he says: In the last school year, I came first in the first year of my master’s degree at the Lebanese University, even though I am the only Syrian in the batch. This made me and my family, who suffered a lot, happy. The cooperation among Syrians, individuals and organizations, during the storm that struck the Syrian refugee camps in Lebanon last year, was an important humanitarian indicator, as we responded spontaneously against the crisis and we were able to accomplish many tasks in a short time.