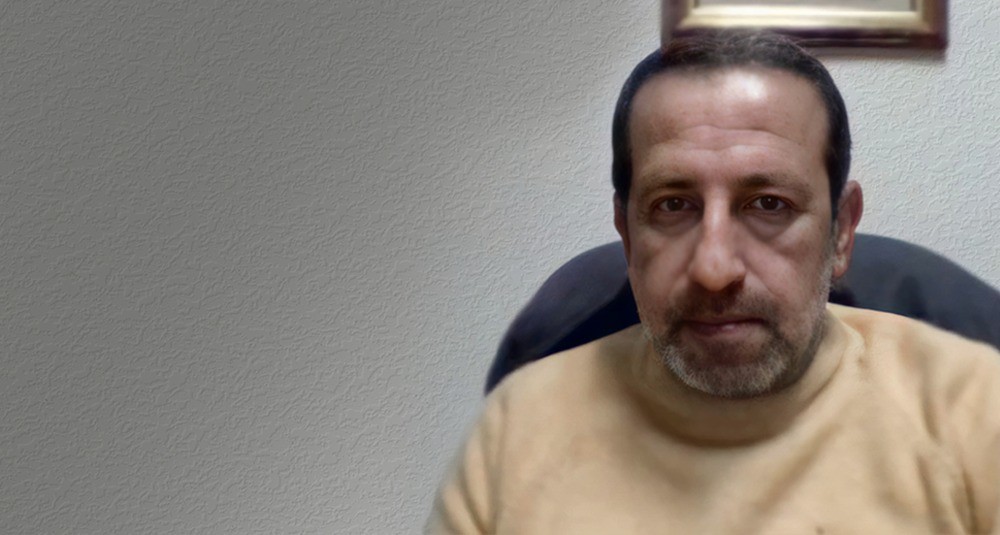 Doured Jabbour, I dream of Syria that is owned by its people, not by a government or authority

Doured Jabbour, I dream of Syria that is owned by its people, not by a government or authority

“I dream of Syria that is owned by its people, not by a government or authority”

One of the people who declared their position in Latakia early in 2011,
Doured hosted in his house in 22 March, 2011 a group of those interested in the
public affairs. After collecting over 100 signatures, they issued a statement
calling for not using weapons and violence against demonstrators. He also
co-founded Maan [Together] movement, a secular democratic movement that
received no support in Doured’s opinion, who said that the movement depended on
the members of the movement by collecting charities to help people. However, as
time passed by, peaceful and civil work retarded, and weapon and more extremist
groups have had the louder voice, therefore the group contracted. Doured
continued his work with the movement but with less efficiency, then he moved to
work in providing relief and medical aid to IDPs in addition to participating
in conferences and symposiums held abroad on the Syrian issue. Those were
attempts to push forwards towards a national, democratic and secular movement,
as Doured says.

Doured was close to the Communist Labor League which was one of the political
parties active in Syria, before he left for Cuba to study medicine. He went
back to Syria with the same clear and free opinion he had. He participated in
cultural symposiums to discuss political issues which exposed him to continuous
abuse and pressure by the security agencies. At the start of the so-called civil
action in Syria with the advent of Bashar al-Assad to power, Doured was among
those who formed the national labor committee in Latakia, which was a civil
political plan for democratic change in Syria. The committee, however, did not last
for more than 2 years as they were forced to dismantle it.

Doured participated in the revolution because he was aware of the
importance of change and believed in the revolution principles and goals in
fighting oppression, corruption, authoritarianism and living under laws
respecting human rights and dignity. Although he had good economic and social
conditions in Syria, but the daily pressure and threats he came under by
Shabiha thugs and security agencies in Latakia made him leave Syria in 2015 for
Sweden.

“I joined SWPM because I believed in its
goals and principles, and because it could represent a party that is missing
from the political arena in Syria, especially on the opposition side.”

His interest in politics started at the age of 16 through participation
in conferences and dialogues and reading of political and philosophical books
and novels.

Doured says that all foreign parties that interfered in the Syria militarily
and politically to protect their own interests foiled the political work, in
addition to the mistakes of the regime and the opposition. This requires now an
international agreement for a transitional period that may result in the change
that the revolution called for since the beginning.

Doured joined the Syrian Woman Political Movement because he believed in
its goals and principles, and because it could represent a party that is
missing from the political arena in Syria, especially on the opposition side,
as Doured says. Out of his belief that men and women should be legally equal,
especially that women are more than men in Syria, Doured says that it will be
difficult to build a country without acknowledging this equality as a first
step. Our demand for equality cannot be true if we reject equality between men
and women before anything else.

“SWPM is not a demand for women only, it is a necessity for the Syrian
community. Everyone should contribute to push it forward to occupy the space it
deserves,” Doured adds. For Doured, it is important for SWPM to establish
relations with the largest number possible of women and men inside and outside
Syria to create weight that can impose goals, opinions and the desire to
achieve better representation of women by presenting problems from a feminist
perspective, not only in politics, but also in all life aspects.

“The literal meaning of the word ‘revolution’ refers to desire to change
reality; since our reality is painful in all aspects, the revolution will
continue to realize change for a better situation. For the revolution to
continue, Syrians should agree on general principles rejecting political and
religious dictatorship alike. Ego, narcissism and prioritization of personal interests
over public ones should be ended” Doured says.

Doured dreams of Syria with
freedom, justice, equality, political parties, civil society and fair and
independent judiciary; Syria that is owned by its people, not by a government
or authority.

Doured says to Syrian women: “You are our hope, maintain your determination,
because you can do a lot and men couldn’t prove that they can do anything without
efficient participation of women, and they do not seem to be able to do so soon,
so you are our hope.”