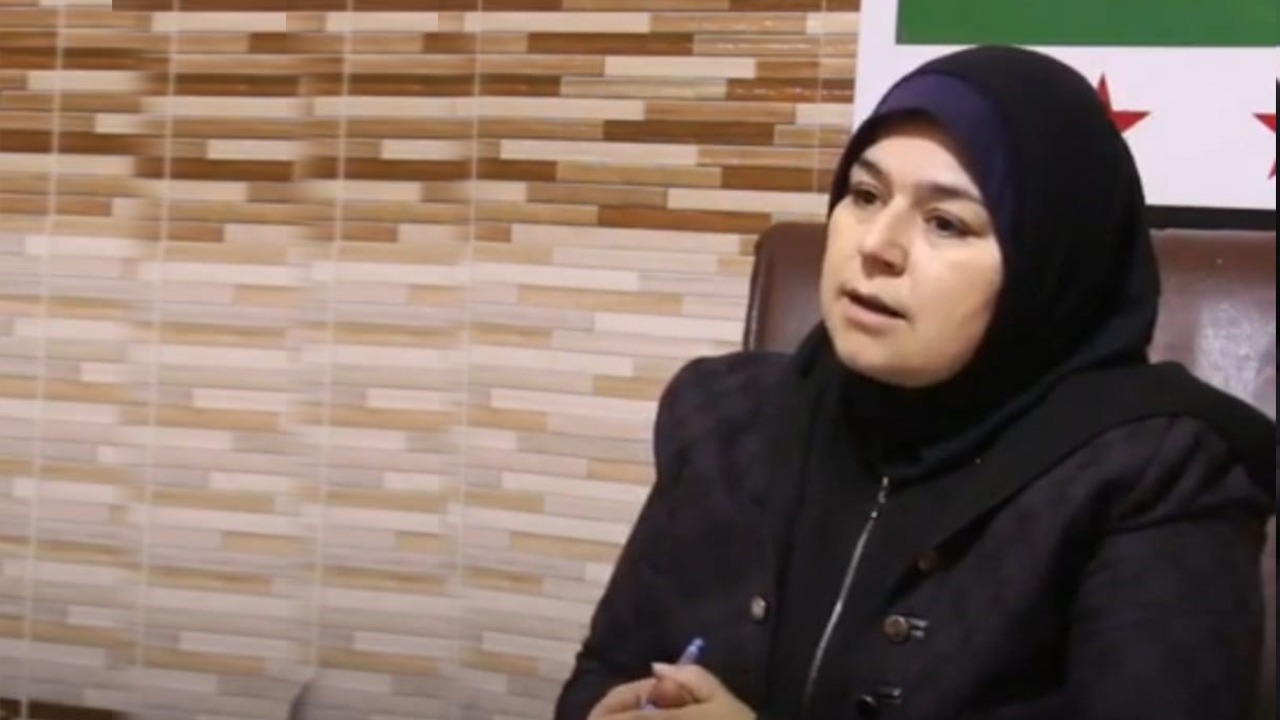 Maisaa Al-Mahmoud was born and raised in the city of Aleppo. After receiving her bachelor’s degree from the Faculty of Education, specialising as a class teacher, she worked as a teacher in Aleppo. Before the Syrian revolution in 2011, her life was focused on her family, she says. Her contact with the outside world was limited, as she puts it. However, a quantum leap in her life took place when the revolution started. “When the Arab Spring started, I found myself wondering like most Syrians whether Syrians would ever revolt against their regime,” she says. “In March, when the head of the regime showed no signs of remorse after the infamous incident of the children of Daraa, my hatred for the regime doubled. I made up my mind that if any activity were to take place against the regime, I would join it. Sure enough, when the first demonstration against Assad happened in my city, I was in it. As I uttered the first chant for freedom, I felt that I had become another person. I felt a power go through me that I had never felt before, like the superheroes we read about. When I remember these times, I feel that this power was all along inside me but was buried under the pressure of traditions, taboos and social norms. Women were not given the chance to discuss politics, or be involved in public life in general. Society had confined women to a life inside the walls of their homes. The screams for freedom helped me break away from years of social and political oppression.”

Maisaa still remembers her family’s discomfort because she and her sister took part in the demonstrations. Her family were worried because of the way the regime’s forces clamped down on protests on the one hand, and because of the society’s look towards women who did such things, on the other. “I used to go to the demonstrations with my sister without telling our family,” she says. “This went on until my sister was injured. That’s when we had to tell my father who was extremely angry with us. We understood his reaction as the result of years of living in a culture of oppression and taboos. After all, such was the case of women in all other families. Their argument was that, if arrested, women could be raped in security branches. They felt that they would receive the blame for letting us go to demonstrations in the first place. It felt like they were blaming women for being arrested or raped by criminals in a country where there’s no rule of law.”

“I feel that the power was all along inside me but was buried under the pressure of traditions, taboos and social norms. Women were not given the chance to discuss politics, or be involved in public life in general. Society had confined women to a life inside the walls of their homes. The screams for freedom helped me break away from years of social and political oppression.”

These obstacles did not stop Maisaa from carrying on with her activism, which was not restricted to demonstrating. As the uprising developed, she started with a group of female friends what was known as “the university’s coordination committee”. She was also involved in relief work, then she moved to work in the media in order to cover the news of demonstrations, clashes, and bombing.

Talking about her personal motivation to participate in the revolution and adopt it as a personal enterprise, Maisaa says, “In the beginning, my involvement was caused by deep hatred for the regime. I have heard a lot about the massacre of Hama. Like all Syrian men and women, I have experienced the oppression, lack of civil liberties, social injustice and other political realities that were detrimental to our lives and prospects. The other reason was my wish to fight against backwards social norms and patriarchal practices which have been undermining me all my life. When I shouted demanding freedom, I broke away with the stereotypes that described me as a ‘weak creature’ or a ‘broken wing’. As the revolution carried on, another reason was added to the list of reasons why I demanded freedom: the death of my son. He was shot by a sniper. My two sons were my friends along to way to freedom. He was only eighteen, and he paid his life for the revolution. Despite my grief, I respect his choice because I know that freedom demands a high price.”

Because she worked as a war correspondent, Maisaa’s house was raided several times by security forces, which forced her to stay on the move in order to avoid arrest. Later, she was arrested by members of al-Nusra Front extremist group. “The Front did not like my field work,” she said. “They saw me as a heretic. In their view, I was a divorced woman whose only place was her home. Several influential people had to intervene before they agreed to release me.”

From Aleppo, Maisaa left to the city of Atareb in the western countryside of the Governorate. Then, she was forcibly displaced and she currently lives in the city of Afrin. About this experience, she says, “It does not feel like being in Syria here. The Turks have the final word on everything. Now they have decided that we need to join social integration courses along with the Kurds who already lived in the city. What could such courses provide other than increase tensions? In my opinion, we are all Syrians and we need no lessons to learn how to coexist. We have all become victims: the Kurds have had their city overtaken by others, and we, Arabs, have been displaced. It is as if our existence has to be made on the expense of the Kurds. All these developments have pushed me into a difficult psychological situation. After all the painful experiences we’ve been through, we’re still unable to make a decision in our personal affairs.”

“I joined the SWPM because I was keen on being in a community that approached politics from a feminist perspective.”

About the beginnings of her interest in politics, Maisaa says that it was her interest in media that made her want to get more involved in politics. “Politics and media are strongly related fields,” she says. “This is one thing that I learned from the training courses I have been on and from my practical experience. Revolutionary activity is also inseparable from politics. After the revolution, politics and tricky political concepts became part and parcel of our daily lives. We needed to become well versed in the subtleties of international resolutions, political formations, and negotiations.”

As for the challenges facing political work in Syria, both before and after the 2011 Revolution, Maisaa says, “Before 2011, the main challenge was simply that Syrian men and women were excluded from political activity. The regime and the Ba‘th party controlled all areas of the political scene. After 2011, especially among the opposition, I believe that the challenges are similar in nature despite the different nomenclature. Several front-row politicians from the Syrian oppositions are unable to make independent decisions. They are followers of foreign powers that could not care less about the will of the Syrian people or their dreams for the future.”

About the challenges facing Syrian women in particular in the field of politics, Maisaa comments, “Syrian women are currently making a lot of valiant efforts to go into politics. Some of them are really highly-qualified and have valid political plans. However, they are faced with staunch resistance by the domination of men who, despite all the best efforts of Syrian men and women in order to establish the concept of female representation in politics, are still taking centre stage in a poor male-centred political performance. It is sad that we are still in the stage of demanding an acceptable quota of representation for women. I often find myself wondering, what have men done more than women during the past ten years? I feel that women have sacrificed more because the pressure on them is double. Even during the most difficult times of war, women still suffer more.”

Maisaa talked to us about her motives for joining the SWPM. “I was seriously searching for an organisation or a political platform through which I can express my opinion and develop my political knowledge,” she says. “I studied the movement’s agenda and contacted some of its members. I liked the idea of a movement that is both feminist and political. I am keen on being in a community that approaches politics from a feminist perspective, because other approaches in my view will not be able to make real change. After joining the SWPM, and despite the big difference in experiences between myself and other members, I noticed that the prevailing atmosphere was one of listening to the opinions of others and respecting them. No single member is treated as the main person or entity in the movement. All are equal. This is such a new experience for most of us.” About the role that the SWPM might play in the future of Syria, Maisaa says, “I expect that the SWPM will play a key role in the current and future political scene because of its vision and modus operandi in achieving its goals in building a country based on equality and social justice. All we need to do is keep working patiently until our dreams are realised. Political work requires a great deal of perseverance.”

Asked about the Syria of her dreams, Maisaa says, “I dream of a stable country built on the firm foundations of freedom, justice and equality; a Syria that appreciates its citizens regardless of their social, political, religious and sectarian backgrounds. In particular, I dream of sitting on the balcony of my house of  Aleppo to watch the houses of the city filled with life.”

Addressing the women of Syria, Maisaa says, “Syrian women are stronger than this war. A long and atrocious war has not been able to break you. Think about your abilities, and how much the country needs you because you are an essential part of Syria’s peace and safety.”

Despite all the tragedies she has witnessed, both personal and public, Maisaa still sees hope among all this negativity, which is her view of herself as an independent, strong and experienced woman who is part of a justice-seeking revolutionary action.