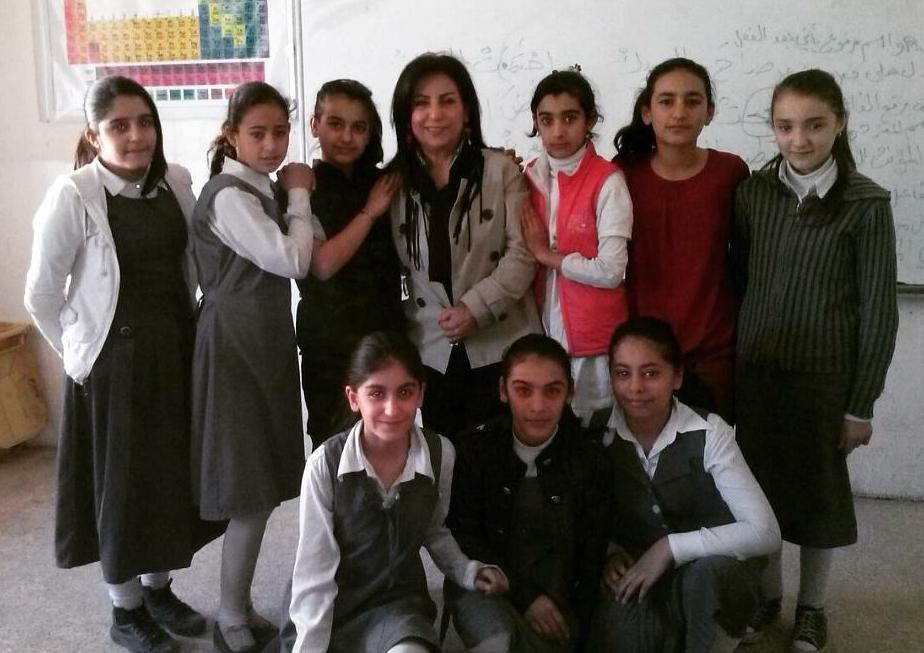 Frial Hussein, Assad regime was the cause of political poverty in Syria

Frial Hussein, Assad regime was the cause of political poverty in Syria

Assad regime was the cause of political poverty in Syria

Frial worked as an elementary school teacher after
graduating from the Teachers’ academy
and was affiliated with the Communist Party, the Political Bureau since 1977. Frial
says: “My work was not
limited to politics, as I devoted part of my time to civil activity”.

On the start of the revolution in Syria,
Frial says “Although I
did not participate in the demonstrations that took place in my city, I was
happy to see the demonstrators and I was in solidarity with everyone who took
to the street, and after the displaced people from Homs, Idlib and Aleppo began
arriving in Latakia, it was necessary to move on the ground to help, I worked with a
group of women to help families and provide some shelter and basic needs for children and families”. Frial continues “After a while, I knew that the intelligence started
asking about me, so I decided to leave Syria, first to protect my children, and
because I have experience of
detention for days in 1994 regarding
my political activity, and I do not want to repeat this experience. In 2013, I left Syria for Iraq
Kurdistan, before moving with my children to Germany in 2016.

In Germany, I started learning German and worked as a newspaper
distributor for two hours a week. Recently, I received an offer to help Syrian
children studying in a neighbourhood school. I also try to attend some activities
in the city such as refugee workshops this helps me practice my German.

“The
political representation for women should rise from 30% to 50%, and overcome
obstacles for Syrians to run for any political position, starting with the
presidency of the republic.”

On the
challenges facing political action in Syria, Frial says “The presence of a
tyranny regime was the first cause of political poverty. The regime exercised
repression against the parties and was singularly ruling. And recently we
cannot deny that the opposition, in turn, has turned away from the people, just
as most political parties have let them down. Some have been searching for
quotas, others were dragged into arms, and some of them have followed foreign
agendas, and the only loser in this equation is the people who have lost
confidence in all political parties.

As for the
challenges that Syrian women face in political work, Frial says “Society poses
one of these challenges because women were marginalized in our society, even
those who lived in a somehow open environment were not spared from framing and
inequality. However, this image began to change after the revolution, as Frial
sees that the role of women is emerging and this does not mean only workers in
political affairs, but women, in general, began to take more space in the
Syrian public scene.

Regarding
her joining the “Syrian women Political Movement”, Frial says “After
my arrival in Germany, one of the former comrades in the party contacted me and
urged me to continue my party activity, and we decided to reactivate our
political activity, so I was entrusted with the task of representing the party
in the coordination body, the German subsidiary, and after two years of work I
decided to leave the party, and then through social media, I began to get
acquainted with the “Syrian women political movement” and admired its goals and
felt that being within this body could be effective. Frial adds “I like the
movement because it is a comprehensive and diverse platform that includes women
and men from different cultural and social backgrounds and from different ages where
everyone plays her/his own role”.

Frial
believes that the political representation for women should rise from 30% to
50%, and overcome obstacles for Syrians to run for any political position,
starting with the presidency of the republic, and calls on all women to raise
their ambitions.

On her
motives to continue participating in public affairs, Frial says “I work out of
moral motivation because I am not looking for a decent life for me and my
children only. I hope that all Syrians have a decent life, and this is our duty.
I dream of a Syria where the citizen has freedom of speech, citizenship and freedom.
This is a purely humanitarian requirement. I have the right to have a decision
in my country, when we obtain our freedom, we obtain safety and decent life,
and for this reason, the Syrians started their revolution.

“I like the SWPM because it is a comprehensive and diverse platform that includes women
and men from different cultural and social backgrounds and from different ages, where
everyone plays her/his own role.”

As for the
most beautiful moments that Frial has gone through during the past years, she
says “I worked for a while as a teacher in Kobani. My class was composed of
forty students’ males and females. One of them asked me: Where are you from? I
replied, “I am Syrian. I saw the joy on his face. It is a moment of a
sense of belonging.”

In turn,
some moments during the journey to reach Europe were very harsh. “Waiting for
the unknown, the hardship of the sea, and the news about the refugees who were
drowning, were worrisome to me, especially that I am accompanied by my children”
Frial adds.

For Syrian
women, Frial says “I thank every woman who contributed, even in a small part,
to the recovery of society, no matter how small your role, make sure that it
has an impact on all levels, whether you are mothers, young girls, politicians
or others”.