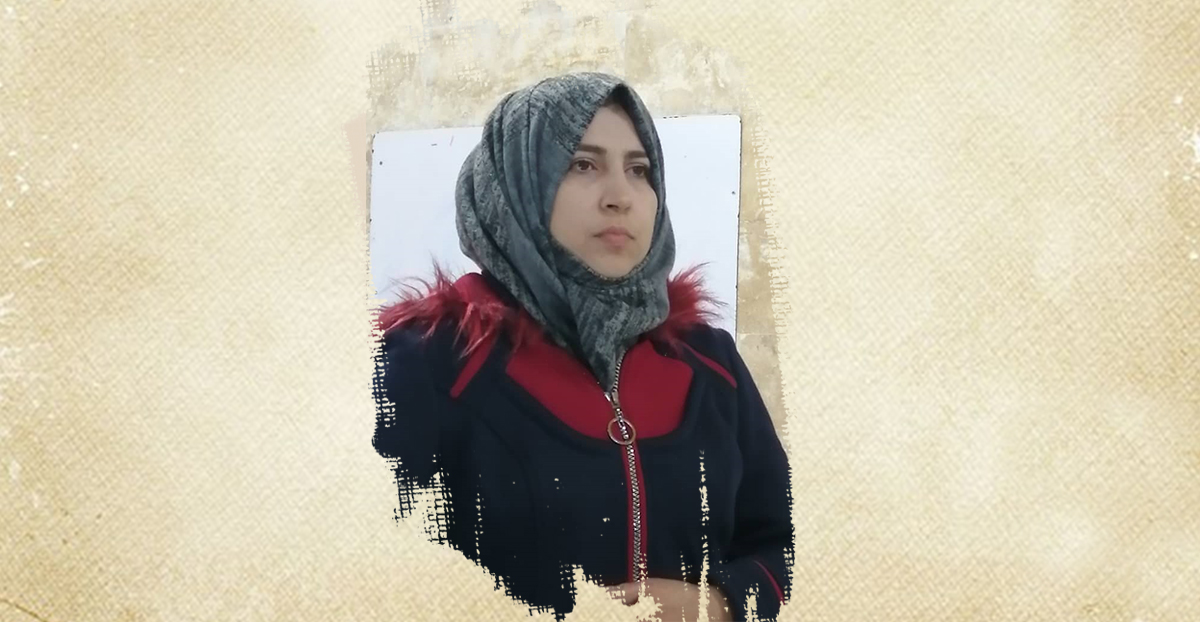 Ghada Bakeer, We Fought the Bullets with our Voice

Ghada Bakeer, We Fought the Bullets with our Voice

Born in the city of Saraqib in the eastern countryside of Idlib, Ghada Abdullah Bakeer studied Social Counselling at the International University in Ma‘arat Al-Nu‘man in Idlib, then pursued a career in teaching. Currently living in the Turkish city of Gaziantep. Ghada started off the interview by remembering Saraqib, her home town. “What connects me to Saraqib is much more than the fact that it was my birthplace,” she says. “I have fond memories of living there. I lived there with my loving family, played there with my friends, went on lovely picnics with my friends in its wonderful nature where we talked about our dreams and hopes. Saraqib is the largest part of my past and it was there that I expressed myself for the first time when I shouted with its men and women demanding freedom, back in 2011.

Speaking about her involvement in the 2011 revolution, Ghada says, “As I watched the news of the revolutions in Tunis and Egypt, I often asked myself whether the Arab Spring would ever reach Syria. Would I ever witness the moment when people would denounce the Assad regime openly? This criminal regime had turned Syria into a private business, governed with an iron fist, and allowed members of the Ba‘th Party subjugate and oppress people. Soon afterwards, the Syrian revolution broke out. I joined it quickly in Saraqib through writing posters that denounced the regime and called for freedom. My posters also expressed solidarity with other revolting Syrian cities and towns. I worked with a group of female friends on encouraging women to participate, as many of them wanted to join but needed support. I still remember the first demonstration. It was held at night and we walked through the streets of Saraqib as the loudspeakers blared the chants of Hama’s famous demonstration singer Ibrahim Al-Qashoosh. When we reached the main street of the city, north of the Cultural Centre, regime forces started shooting at us. Yet, our chants became louder as if we were stopping the bullets with our voices.”

When we asked her about the reasons that made her join the revolution, Ghada said, “I grew up in a house that was intrinsically anti-Assad. Since I was a little girl, I remember hearing my father criticising the regime in the strongest terms, but only inside the house of course. I also knew about the events of the 1980s in Hama, and Tadmur Prison. I was, moreover, influenced by my older brother who was opposed to the regime and as a result he was arrested briefly in the 1990s. At that time, anti-Assad slogans were painted on some walls in Saraqib. Many young men were arrested. It was almost natural for me to grow up with an innate hatred against the regime, and its leader who was Hafez Al-Assad at the time. My father used to call him ‘the traitor who sold the Golan’. There were, of course, general reasons, that were not too different from my personal reasons. Syria was turned by the Assad regime into a country ruled by corruption, bribery and oppression, let alone the low level of public services, high unemployment, and the difficulties that Syrian men and women faced in all aspects of life.”

Ghada was forced to leave Saraqib in January 2020. She went to the city of Al-Bab in the Governorate of Aleppo where she spent seven months before deciding to cross the border to Turkey. “We knew that the regime was going to gain control of the city of Saraqib,” she says. “Yet, when that actually happened, I could not process it. I decided to go to Turkey after becoming too depressed and because I had no prospects left in my country. During the border crossing, I experienced another form of grief. I remember looking back towards Syria and weeping. I wept for the dream of freedom which ended up with the killing, arrest and displacement of millions.”

“I am still living in a state of loss and confusion,” Ghada says about her current situation. “I cannot believe what happened. I have lost my homeland, career, and possessions. I live alone, far away from my family and friends. A stranger in a strange land. Although Syrians should now be accustomed to this kind of loss, avoiding talking about losses makes me feel worse. True, I am enduring a sense of emptiness and I am unemployed, alongside innumerable psychological losses. But this does not mean that I have surrendered. I am trying to achieve some form of psychological stability. On the practical level, I am planning to rise again and rebuild my life.”

“If we really want to make the participation of women in political life matter, and achieve fair political representation for women, we must work on creating a political body that has a feminist perspective. This is what I found in the SWPM.”

Growing up in a family that had an interest in politics and public affairs made Ghada’s wish to work in politics stronger, and it reinforced her ambitions of playing more important roles in this area in the future. “Syrian women and men were not permitted to even express a wish to work in politics,” she explains. “Before the revolution, there were no real political bodies that could be freely active in politics. The people were marginalized. Today, the space for political activism is more open, but in reality, the majority of the people are still uninvolved in any meaningful political activity. This might be because the current paradigm, i.e., councils, organizations and other bodies, have not been able to present an acceptable political performance. As a result, Syrians have lost interest in political work and adopted a non-participatory attitude. Of course, the majority cannot even think about the future because of the harsh conditions of war, displacement and poverty.

The challenges facing women in political work are many, Ghada adds. “Women’s role on the political scene is still unsatisfactory,” she explains. “Women are still being kept outside the decision-making circles for various reasons, most important among which are the forces of society which have pigeon-holed women into a limited number of roles and positions in life, making the majority of them housewives. This marginalization has weakened women’s experience in politics and deprived them from playing key roles which they should have shared with men equally. As a result, men have become at the forefront of political, social, cultural and economic activism.”

One way that Ghada has chosen to engage in political work is by joining the SWPM. Asked how and why she joined the movement, she says, “I began to notice posts made by the movement on social media, and they attracted my interest. I felt that I supported many of their proposals, most importantly the fact that the SWPM is primarily a women’s organization. If we really want to make the participation of women in political life matter, and achieve fair political representation for women, we must work on creating a political body that has a feminist perspective. I wanted to be part of the movement. I applied for membership through the movement’s Facebook page and I was accepted. The SWPM is home to many women and men who have significant experience in political work. Some of them have experience in social and legal work as well as other fields. There are also members who are active on the ground. We all exchange ideas and experiences. We are always learning and benefiting from each other.”

Ghada hopes that the movement can achieve fair political representation for Syrian women, and that the SWPM would contribute to the writing of a new constitution for Syria in which the rights of Syrian women are guaranteed on the basis of equality. As for the challenges facing the SWPM, Ghada believes that the greatest challenge relates to carrying out their activities inside Syria. Whether one is trying to work in an area controlled by the regime or by the extremist groups, political and civil activism is treated like a crime.

“I am driven by the hope that all the crises we are going through are nothing but the birth pangs of a new Syria that is capable of standing on its own feet despite all the suffering. I am fully convinced that the Syrians are a great nation and that they shall one day be free.”

Moving on to talk about the Syrian situation, especially now as we near the 10th anniversary of the revolution, Ghada says, “It is a sad state of affairs that the cherished principles of the Syrian revolution have become an item on the agenda of the negotiations to get out of the current impasse. The situation in the north is horrific; people live amidst a corrupt and chaotic military rule which follows the dictations of external powers. All of these things only serve to derail the revolution. Our only salvation is achieving unity among Syrians by discarding sectarianism and partisanship, which have become so dominant in recent years. Syrians should always combine efforts, and refuse to be followers of foreign powers.”

Asked about her motivation for staying active in Syrian public affairs, Ghada said, “I am driven by the hope that all the crises we are going through are nothing but the birth pangs of a new Syria that is capable of standing on its own feet despite all the suffering. I am fully convinced that the Syrians are a great nation and that they shall one day be free.”

She might be going through a rough period, yet Ghada can see a silver lining in it. “I believe that the difficulties I have been through have helped shape my personality and develop it,” she explains. “Before the revolution, I was not satisfied with my professional or personal life, but I did not have the power to face reality. However, joining the revolution has revealed in me new powers that I did not know about.” Ghada explains that “One of my most important practical experiences I had was when I worked as a follow-up and evaluation officer in the ‘Free Syrian Police’ project. It was such a rich experience during which I travelled through the Governorate of Idlib and visited police stations as a monitor for the project. The job taught me strength of character and provided me with communication skills. It was a difficult job for me because I could see how the male police officers were not happy to see a woman overseeing their work. But I will never forget that many of them were extremely helpful and gave me all the information I needed.”

“In another area,” Ghada adds, “I worked on documenting the lives of martyrs who died in prison. I published a book about this in collaboration with a team working inside Syria and the Turkish magazine Zaitoun.”

We asked Ghada about the Syria of her dreams. “I dream of a unified Syria, whose united people discard, for good, all vestiges of sectarianism and overcome their suffering in order to create a nation that is strong because of its advanced government and economy, a nation that can stand proudly among the world’s big players.” she answered. “I dream that women can become real leaders and decision-makers in the Syrian society, that they leave their positive impression of political, cultural and intellectual life. I want Syrian women to be the co-writers of Syria’s modern history.”

Ghada addresses the Syrian women in the following terms, “You are Syria’s future. You need to realise that the homeland needs every single woman who is capable of work and improvement. Do not accept the stereotypes. Rather, fight to build the human being as well as the homeland. Change the reality that is hurting us all.”