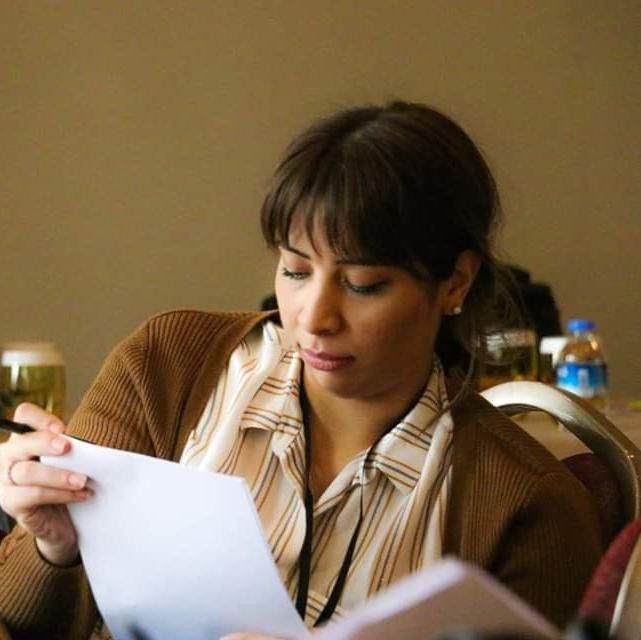 Hanan Ahmad, says that at the beginning of the revolution in 2011, there was no revolutionary action in her area, so she didn’t participate much in the revolution. Her participation was more focused on helping families who were displaced from Deir Ezzor, the city of Homs and other areas to their area. Her support of and participation in the revolution, just as other Syrians, came out of her desire to change the reality and break the barrier of fear of a corrupt and tyrannical regime which prevents its people from the basic human rights.

She were smuggled out of Syria in 2016, in a long and dangerous journey, to join her family in Turkey. Like many Syrians in Turkey, she is suffering from difficulty of getting residency and official documents, and from decisions related to Syrians in Turkey in general.

Hanan’s interest in politics started with her interest in the revolution in Egypt, Tunisia and later in Syria, but she didn’t engage in any organization or political entity, because her family insisted that she should dedicate her time and effort to study and graduate from university, before anything else. The logic behind that was that when she acquires knowledge and experience she will become an active person in community and then she will be able to help the people of her country.

“Women in politics face challenges with the surrounding community that always questions their capabilities to make right decisions, frustrates them and underestimates any idea or goal they aspire to.”

Hanan says that she is interested in political activity because politics is part of our daily lives and cannot be separated from other aspects of life. Everyone must be aware of what is going on around them in political life and where the interest of the people and the country lies especially at this stage, despite the big challenges that faced political activity in Syria before the revolution, especially the rule of a single party in the country. That made people prohibited from politics and they were forced to remain silent, otherwise they would end up in prison for the mere expression of their opinions.

Talking about challenges that faced political work in Syria after 2011, Hanan said that it was represented in arming the revolution, the fragmentation of the opposition and its refusal to negotiate with the regime, in addition to foreign interventions. As for the challenges Hanan faces as a woman engaged in politics, she said that these are challenges with the surrounding community that always questions women’s capabilities to make right decisions, frustrates them and underestimates any idea or goal they aspire to.

“I dream of Syria where women will hold decision-making positions and citizens will be equal regardless of their religious or ethnic background and women will be respected and equal to men in all areas.”

Hanan joined SWPM because its goals and principles match what she believes in. She expects that SWPM will manage to realize its goal in increasing women representation in politics by 50%, thanks to the great efforts exerted by the members and their insistence on holding to their rights and demanding equality with men in all areas, especially the political one. Hanan also believes in the need to adhere to the goals and principles of the revolution, including overthrowing the dictatorial regime and living in a democratic and civil state where freedom, justice and equality prevail. Hanan dreams of Syria where women will hold decision-making positions and citizens will be equal regardless of their religious or ethnic background and women will be respected and equal to men in all areas.

“Syrian women proved to be strong and able to endure the most difficult circumstances. I hope they keep going with the same determination and believe in themselves, so that they can make a change and realize their goals.” Hanan said.

“We have women who are able to be leaders. I hope to see a Syrian woman holding the position of the president of Syria in the future.”