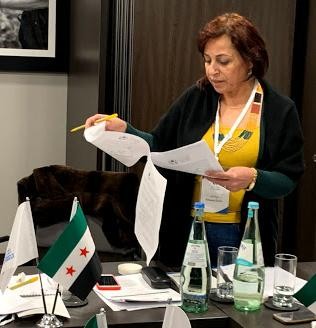 Khawla Dunia, The Revoltion is the Thing I Have Been Waiting Long Time Ago

Khawla Dunia, The Revoltion is the Thing I Have Been Waiting Long Time Ago

Khawla was among the first to join the revolution since its beginning, as she was from a generation that was interested in political action in Syria even before the revolution. Her detention experience in 1990s created a desire and a motive to rebel against the tyrannical and dictatorial regime. “The revolution was what I have always waited” Khawla says. She started by writing and reporting the reality of what was happening in Syria to the world. In addition to her political activity and participating in demonstrations, Khawla worked in the civil and relief space, where she took part in establishing “Najda Now for Development and Humanitarian Relief” in 2012, which contributed to providing relief aid all over Syria, and was among the first institutionalized relief organizations.

She became wanted by security agencies on the background of her political, journalistic and relief work since December 2011. She was on the run, moving from one house to another and from one city to another to avoid detention by the regime, until moving between cities became very hard in 2013. She had to leave for Lebanon illegally, where she stayed for a year and a half. Her family was also harassed and her husband Jalal Nofal, who was a political activist, was detained four times during the revolution, until he had to leave Syria at the end of 2014.

After Lebanon Khawla headed to Germany, stayed there for two years, and afterword went to Turkey at the beginning of 2017, where she is still living and working in Gaziantep.

Khawla says that her older brother was a political opposition figure since 1970s, and had to leave Syria for good because he was wanted by the regime. That situation put her in constant contact with the security agencies first, and with the political opposition later. This situation taught her the meaning of being a political refugee whose entire family pay the cost of their political position against a tyrannical dictatorial regime. Her family had a travel ban for 15 consecutive years, and all family members were subject to periodical interrogations. This planted the seeds of opposition in her, pushing her to communicate and learn more about the opposition political work in her college years, especially through the Syrian communist Labor party, which led to her detention later.

“First, a woman needs to struggle at a personal level against the social system she lives in to be able to make a political change, because our community is not ready to listen to a political woman yet.”

On the challenges that faced political work in Syria Khawla says that the policy of suppression adopted by the regime against any political opposition action since the early 1960s until the eruption of the revolution had a key role in the effects clearly seen after the revolution. The opposition failed to establish a storng political movement capable of representing the revolution and explaining its demands. The political forces, individuals and groups, tried to represent the spontaneous revolutionary public movement, which were reflected in immature and unclear public demands, but failed to do so, leaving the space for other populist currents to emerge and kept the representation of the revolution to themselves, changing the path of the revolution and leading it to extremism and fragmentation, and consequently to the failure to realize any of its demands. With the long experience of the regime in facing any opposition movement, be it popular or organized, the regime managed to drag the revolting forces into extremism and militarization, leading them to the obvious affiliation to foreign countries, and the potential of manipulation through arming and funding. This led to more violence, and put the real revolutionary forces between the regime and its allies on one side, and the extremist forces in control on the ground or opportunist forces that found an opportunity to make more wealth and control the people.

“We, as Syrians and opposition, despite all the current political formations, we do not have a political movement that represents Syrians yet.” Khawla says.

Talking about the challenges facing women in politics in particular, Khawla considers that women are required to exert doubled the efforts men do in general, especially in politics. First, she needs to struggle at a personal level against the social system she lives in to be able to make a political change, because our community is not ready to listen to a political woman yet. Then she has to struggle as a politician to be able to represent people, to speak politics and to politically represent a party, a popular dynamic or a group of people, which multiplies the challenges faced by women.

“As women, we are able to build something different. A large part of building Syria’s future will be shouldered by women, so we have a big role that we must not abandon.”

Khawla joined the Syrian Women’s Political Movement because she felt, like other women, that women in general, and politician females in particular, are extremely excluded and intentionally marginalized. The political formations that were formed before and after the revolution were masculine in general, ignored women issues or considered women issues part of other issues that do not need to be dealt with separately for their peculiarity. Therefore, Khawla says that there was a need for a feminist political movement that includes a large group of women who are politicians or just interested in the political reality of women and their presence in the political space, in a very sensitive era for Syria and Syrian women. It should also be feminist because it addresses issues through a feminist perspective and the sensitivity of the deteriorated reality of Syrian women at all social, legal, constitutional and political fields.

She adds that SWPM is required to take clear political positions that reflect all issues of Syrian women and men. This requires SWPM members to study the political reality, political participation and the presence of women in decision-making positions and the tables of dialogue and negotiations. It should also produce political knowledge about the Syrian affairs in general and provide solutions, visions, and positions, in addition to not overlooking the important role that have been played by women in the revolution and in deciding and making the solution, as well as in building a civil democratic Syria that protects all its male and female citizens and treats them equally in terms of rights and obligations, with the removal of all forms of discrimination based on religion, race or gender. A citizenship that adheres to international law of human rights and all international instruments produced through the evolution of mankind and their vision to a world ruled by peace and justice.

Khawla says to Syrian women: “As women, we are able to build something different. A large part of building Syria’s future will be shouldered by women, so we have a big role that we must not abandon.”