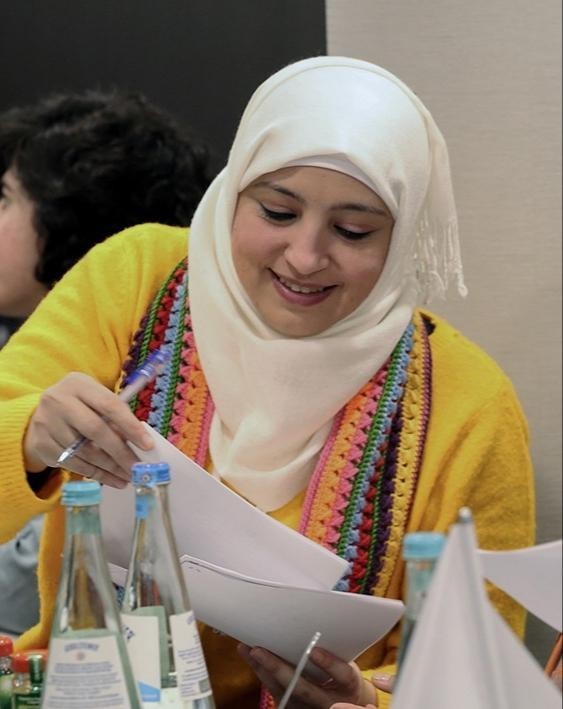 Kholoud Ahmad al-Asrawi, Empowering Woman is an Essential Task for Both Men and Women

Kholoud Ahmad al-Asrawi, Empowering Woman is an Essential Task for Both Men and Women

Kholoud Ahmad al-Asrawi, was among the first participants in the peaceful demonstrations in Damascus and Damascus countryside, especially in al-Qaboun, Barzeh, al-Mazzeh, Rukn Eddin, Midan and other areas in 2011. When locals from Douma, Dumeir, Hosh al-Fara, Saqba and Hammoria started to seek refuge in Daraa al-Ommaliya area Kholoud managed with a group of female and male activists to establish a relief center there. It was one of the most important relief centers in the area because it was in regime-held area. It faced so many challenges and harassment by security agencies, but it managed to continue and collect aid from philanthropists from inside Syria. She delivered relief and financial aid to over 650 families for 19 months. The center stopped its activities after Jaish al-Islam took control over Adra al-Ommaliya. Kholoud says that the center helped all parties regardless of their political orientations because it focused on the humanitarian aspect only. Among the activities Kholoud undertook in Adra al-Ommaliya was  opening a school for first and second grade elementary students. The schoold hosted 110 students, but it was closed four months after Jaish al-Islam entered the area.

“As women, we managed to show our capabilities and experiences and to raise our voices that we are not different from men; we have ideas and demands that are not different from those of the Syrian street. On the contrary, we as female political strugglers are more capable of feeling people’s pains and representing them politically”

Being from a political family, Kholoud’s interest in politics started when she was fourteen years old. She was concerned about the Palestinian cause, then the Iraqi Issue, but she did not join any opposition party or organization until 2011 when she participated in the expanded national founding conference of the National Coordination Committee for the Forces of Democratic Change. Kholoud believes that political work is essential for building Syria. She also believes that the number of women in the Syrian political arena is too little and must be increased, because women are more flexible than men, therefore they can read the reality more objectively, which would help mitigating the pains of our people, by stopping their bloodshed and the loss of their property. She thinks that when women have enough political awareness, they will be stronger in facing the current circumstances in Syria. “I must continue to work in politics, although my voice is not as loud as other women, but if I do not work in politics I will not be able to build my country. I believe that empowering women to play their role in society is a key mission for both men and women” Khloloud said.

Kholoud thinks that the militarization of the peaceful revolution has been one of the greatest challenges for the political activity in Syria, because it enabled foreign parties to get involved in the country. That was due to the regime’s choice to pursue a security and military solution to face the rightful popular demands to restore freedom, dignity, and social justice. The regime did so to suppress the revolution and prevent the realization of the goals the Syrian people.

Some of the challenges she faced as a woman working in politics were marginalization and not listening to her opinions during the early years of the revolution, because the society believes that women are incapable of representing the society. “As women, we managed to show our capabilities and experiences and to raise our voices that we are not different from men; we have ideas and demands that are not different from those of the Syrian street. On the contrary, we as female political strugglers are more capable of feeling people’s pains and representing them politically” she added.

Kholoud joined SWPM because she considered it the loud voice that represents the demands, objectives and the role of women, because she believed that women can lead an entire country, not only a political movement, or a political body. There are also men within SWPM who believe in the central role of women in society.

Kholoud expects SWPM will realize its goal in increasing women representation in politics by 50%. She also believes that SWPM is exerting great efforts to place international pressure for the release of female and male detainees and abductees, the disclosure of the fate of the missing persons and the safe and voluntary return of the internally displaced persons and the forcibly displaced persons outside the country.

Kholoud says that SWPM and other political bodies should continue to attract and educate the youth, especially women, and raise their political awareness to continue advocating our cause and realize our goals. She dreams of a safe, free, democratic, civil Syria where men and women are equal; a country free of corruption and tyranny.

“I call on Syrian women to be one hand, overcome pain and be resilient because you are the ones who will build and reconstruct this country, with your expertise, patience and courage”

Kholoud lived many moments of happiness and sadness in the past eight years, but she said that one of the moments she will never forget was when she was about to be detained but another girl from a different religion defended her and helped her escape and got detained instead of her. She became one of her best friends later. Kholoud said that this incident affirms the unity of the Syrian people and their cause, regardless of the differences in their races or denominations. Although she is not married and has no children, she said that she was able to experience the feeling of motherhood when she took care of a little girl for two and a half years, after the girl’s mother died and her father was going through hard circumstances. That girl became part of Kholoud’s family and gave her the most beautiful feelings. One of the most difficult moments Kholoud lived during the revolution was when she got detained in front of her father and he was helpless and could not do anything to her.

Kholoud addressed Syrian women saying to them “Be one hand, overcome pain and be resilient because you are the ones who will build and reconstruct this country, with your expertise, patience and courage”.