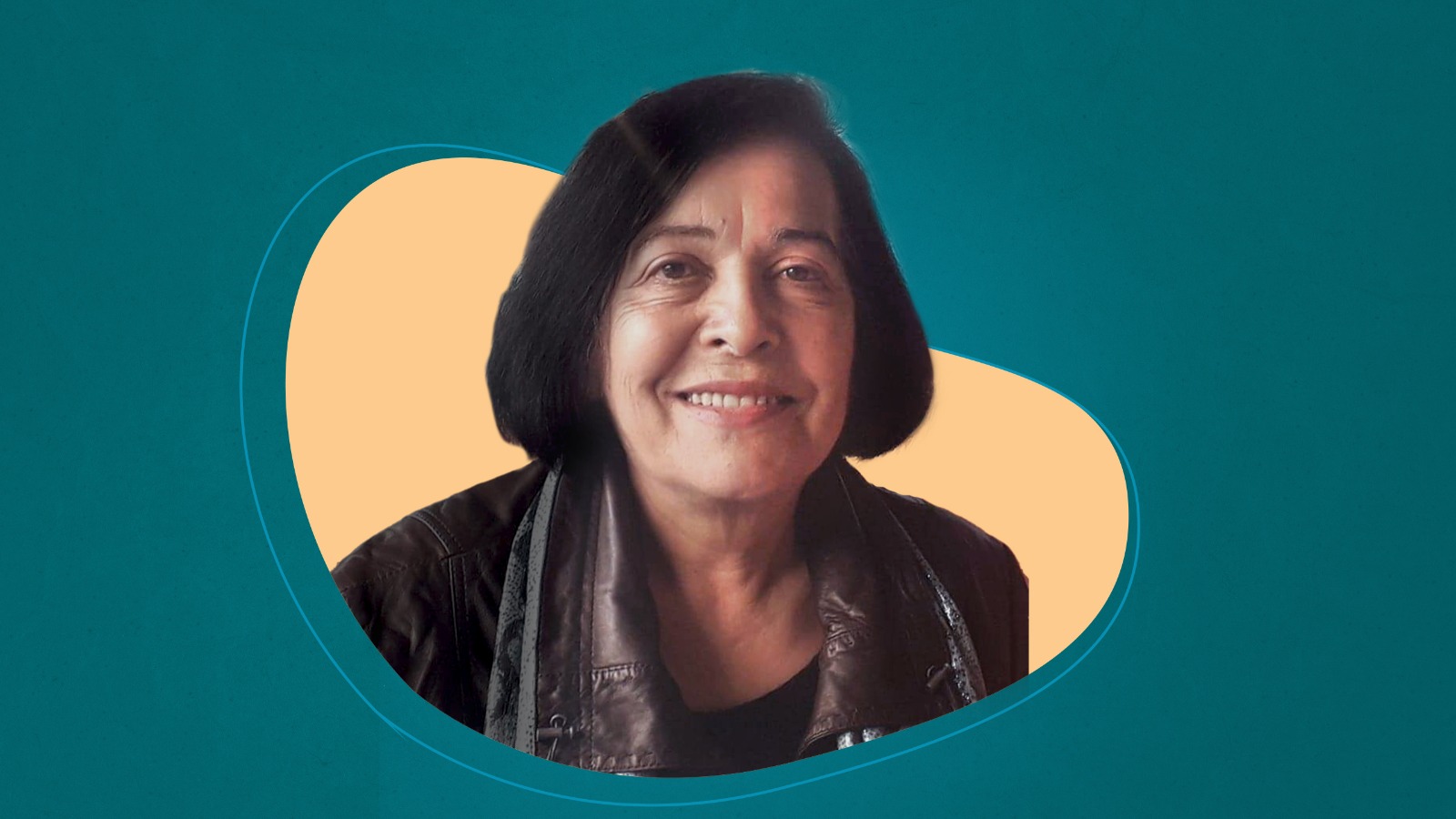 Kibriya Al-Saour has a Bachelor’s degree and a PG Diploma in Sociology from the Faculty of Humanities, Damascus University. Between the years 1993–2014, she worked at the Ministry of Education, Educational Research Unit, and as a social counsellor. “I was always obsessed with spreading a new culture in education based on respect for learners and putting an end to violence in schools,” she says.

After living for a period of time in Al-Muhajireen area in Damascus, Kibriya moved to the neighboring city of Harasta in the Governorate of Damascus Countryside, because the capital, according to her, had become hostile towards its own residents. “I moved from Al-Muhajireen to Harasta after living in Damascus became unviable due to the economic policies of Bashar Al-Assad and his father before him. These policies led to increased poverty in the city and caused waves of relocation to the towns of the surrounding countryside, especially the Eastern Ghouta.”

Speaking of Harasta, Kibriya says, “The city witnessed an influx of people moving in from Damascus accompanied by urban expansion. The new residents interacted well with the people of Harasta. This was evident in the Revolutionary Coordination Committees which were not restricted to young men and women from the well-known families of Harasta. These committees played a key role in organizing the early peaceful protests. Like other towns in Ghouta, the city then witnessed a change in the nature of the revolution with the appearance of the Free Syrian Army. When I first moved to live there, I was wary of the conservative nature of the city. However, with the start of the protests in 2011, new opportunities opened up for people to come closer together and collaborate. It was like I discovered the city anew when its people took to the streets to demand their freedom and dignity.”

Kibriya is no stranger to civil activism. She has been involved in women’s struggle to gain their rights since the year 2000. “I was part of the civil society movement which tried to form after the year 2000, through civil society committees and other organizations that worked on women’s rights. I was part of the Social Initiative Society, which collaborated with other feminist organizations to change unfair laws, especially the Law of Personal Status. We also demanded raising the age for child custody after divorce, and women’s right to pass citizenship to their children.

“The Social Initiative Society conducted an opinion poll on personal status laws in order to gauge the opinion of the Syrian people regarding these laws. The poll was carried out in six Syrian governorates, including the cities of Damascus and Aleppo. After conducting the opinion poll, religious leaders launched a counter-campaign against any change in the Personal Status Law. The Social Initiative Society was dissolved following this campaign in 2007 through a decision by the Minister of Social Affairs and Labor. In the same year, the Syrian Women’s League was suspended from work. The League demanded that Syria joins the Convention on the Elimination of All Forms of Discrimination Against Women (CEDAW). It also ran a massive campaign to allow women to pass their nationality to their children (titled: My nationality is a right for me and my family). The feminist struggle was fraught with obstacles. The regime used various forms of suppression and exclusion to stop it.”

“One of the most important challenges that make women’s participation in politics more difficult is the practice of patronizing women in the organizations and parties that formed after the revolution, or even before it.”

“It was like a dream,” Kibriya describes the start of the demonstrations in 2011. “When the protests broke out in 2011, they used to pass below my window in Harasta. I remember being overcome with joy. The peaceful demonstrations left a remarkable change in the behavior and values of people. One could notice a clear change in people’s manners. I personally believe that this was a result of people feeling that they had regained their lost dignity. They finally felt their value as human beings.”

“My participation in the activities was limited to taking part in the meetings that took place in Damascus,” says Kibriya. “These events were attended by a number of opposition activists, former political prisoners, as well as young men and women from the Coordination Committees. These sessions of dialogue, both public and secret, blossomed and brought together members of society seeking change.”

Kibriya started political activism at a young age. “My political interests were piqued during secondary school,” she says. “I was an avid reader of novels as well as books on social, political and economic issues. I had a lot of political questions and I closely followed developments in Syria and in the region. I was helped by being born into a family with an interest in politics. During my university years, the presence of leftist political movements in the university deepened my political awareness and I became an active member of an organized left-leaning political party.”

Talking about the challenges facing women in politics, Kibriya says, “There are several hurdles in the face of women taking on a career in politics. These problems are well-known and are always mentioned whenever the issue of women in politics is discussed. I just want to add that one of the most important challenges that make women’s participation in politics more difficult is the practice of patronizing women in the organizations and parties that formed after the revolution, or even before it. There is also a general lack of democratic values in most political organizations, old and new.”

“After all this time, and despite the multiple setbacks, defeats and losses, and the continuing humanitarian crisis, the Syrian Revolution carried hefty social changes, thanks to the sacrifices of its children. We have all changed and re-defined ourselves on the personal and collective level. A new consciousness that rejects oppression has been born.”

Kibriya believes that the Syrian Women’s Political Movement has succeeded in promoting women’s political involvement both through experience and practice. It has helped the development of young politicians and leaders among women. This and other reasons led her to join the SWPM. “I asked to join the SWPM because it is an important space for feminist political activity. I think other political bodies are hostile towards women,” says Kibriya. “I expect that the SWPM will have an important role to play, through its political programs and independent decisions. It is important for the SWPM to seek sustainable partnerships and alliances in the face of the current lack of unity in Syria. It also needs to reach out more to women working in politics.”

About the Syrian Revolution which is over a decade old, Kibriya says, “After all this time, and despite the multiple setbacks, defeats and losses, and the continuing humanitarian crisis, the Syrian Revolution carried hefty social changes, thanks to the sacrifices of its children. We have all changed and re-defined ourselves on the personal and collective level. A new consciousness that rejects oppression has been born. Syrian women and men have had a great experience in forming civil society organizations in the fields of media, humanitarian relief, and legal aid. We have thousands of political activists, women and men, specialized in defending human rights.”

The Revolution, Kibriya thinks, has helped create a rich feminist Syrian scene. “As for the Syrian woman, who has always been at the heart of this struggle, a rich feminist scene has appeared, and many feminist activists have appeared. There has been a clear development in Syrian women’s awareness regarding injustice marked by a desire for change. Women’s presence in political, social and media circles has become undeniable. Despite the social setbacks and the anti-feminist calls, a new undeniable Syrian feminism has arisen. The Syrian feminist discourse is quite diverse in its experiences, circumstances and concerns. The presence of Syrian women in different settings, inside the country and abroad enriches this experience. Syrian women in diaspora countries experienced more freedom in an international context. However, all these forms of Syrian feminism agree on seeking a new form of government based on democratic principles, and social, economic and political equality.”