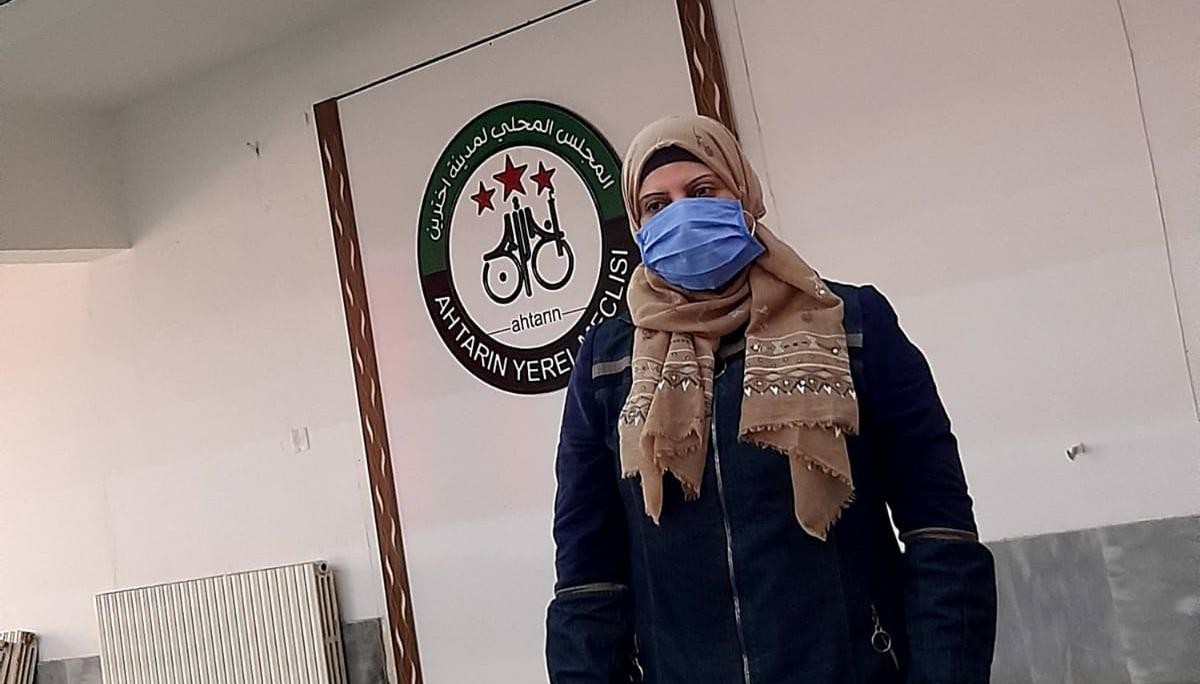 Displacement experience is the worst

Mayada says that because Saraqeb was a
conservative community, she didn’t take part in the protests at the beginning
of the revolution. However, like other women, she opened her house for
revolutionaries, the wounded, defectors, displaced people, media activists and
Arab and foreign organizations. She used to solute demonstrators from the
balcony of her apartment and throw roses on protesters and on the dead bodies
of martyrs.

Mayada tried to continue her work as a teacher
during the revolution, but as the shelling intensified, she had to leave her
apartment in 2013, where she used to host the students, and she moved to their
farm near Saraqeb. She started to help her father with agriculture work, then,
after her return to Saraqeb, she opened a capacity building center.

Mayada became interested in politics when she
joined the Women Now organization, participating in the meetings held by the
organization with the local council members and citizens. Then she joined the
Syrian Woman gathering. Mayada says that since she was a middle school student,
she was interested in the Palestinian cause. So how can she not be effective in
any way when it comes to her homeland Syria.

“I
decided to join SWPM because it includes women with long experience in
political activity, which encouraged me to be among them and learn from their
experience. They all have one goal, which is to bring Syrian women into
decision-making positions. In addition to that goal, they focus on all women
issues and laws that may guarantee their rights.’’

Talking about challenges facing political work, Mayada
says that they are plenty, but the most important ones are the lack of
accepting the other and political ignorance because of the despotic regime that
wants to keep its people ignorant of their rights so they don’t demand them. In
addition, the lack of confidence, fragmentation and the lack of coordination
between the military and political leaders of the revolution. As for the
challenges facing women in their political work, Mayada believes that the most
important one is the lack of political awareness, because Syrian women live in
a masculine community that determines the role of women and marginalizes their
opinions, because men, by nature, doesn’t accept women to excel or compete with
with them. Needless to say, men won’t accept that when it comes to making
decisions at the national level.

Mayada decided to join SWPM because it includes
women with long experience in political activity, which gave her the motivation
to be among them and learn from their experience. In addition to the presence
of so many women who are distinguished in their respective fields, all with one
goal which is to bring Syrian women into decision-making positions. In addition
to that goal, they focus on all women issues and laws that may guarantee their
rights. That is the kind of work that Mayada aspires to be part of.

Mayada expects SWPM to succeed in increasing the
representation of women in political bodies up to 50%, as well as increasing
political awareness of a large segment of women inside Syria through the
trainings SWPM is holding, in spite of all the difficulties and challenges.
Thus, there will be real participation of women in building the Syrian society.
Mayada also hopes to see SWPM leading the political process in Syria one day.

“I
dream of a free, democratic, pluralistic and civilized Syria that is free from
all forms of corruption and hatred, whose citizens respect each other and where
women will be equal to men in rights and obligations.”

Mayada asserts to continue defending our
revolution and our cause, the Syrian people must have the will and
determination and work hand in hand again. That is not an easy thing after all
the fragmentations and divisions that hit the Syrian people in the past eight
years. There is a need to educate people politically to confront all parties
that are trying to exploit this fragmentation for their own interests at the
expense of our country and revolution. “My belief that the land of Syria is our
land; that we have the legitimate right that we must never give up for any
price; that the oppressor should be held accountable no matter how long it
takes, all of that give me the motivation to continue working in public
affairs.” Says Mayada.

Mayada dreams of a free, democratic, pluralistic
and civilized Syria that is free from all forms of corruption and hatred, whose
citizens respect each other and where women will be equal to men in rights and
obligations. A country where citizens have jobs opportunities that guarantee
the decent life they deserve. Mayada calls upon the women of Syria to be
resilient and strong in the face of all circumstances and challenges that they
go through inside Syria or abroad. She tells them: support each other, do not
give up, work hard, learn and educate yourselves politically, because you are
the entire community rather than half of it. You are the ones who will build
the future Syria and the next generations. Do not stop claiming your rights.

Mayada says that one of the most beautiful
events she experienced during the revolution was the withdrawal of the regime’s
army from Saraqeb, and dropping barrel bombs on civilians stopped. However, the
experience of displacement, although for a short period, was the worst feeling
and experience she has ever had because through her own experience, she got
aware how people displaced from their homes and areas feel. She says that her
body is living in a place, while her heart is living in a different
place.