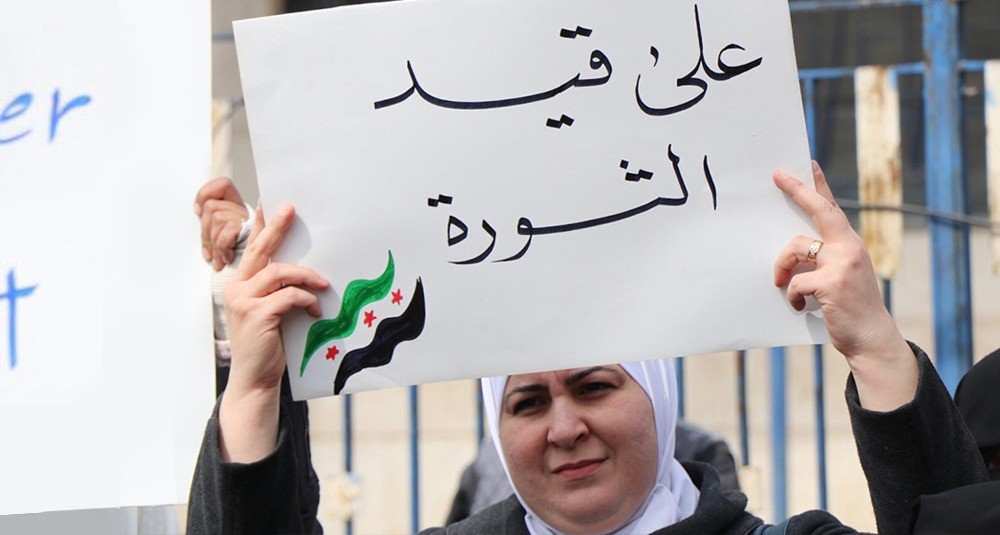 Nivin al-Hotary studied Business Management and she
had been working in the same field for 11 years when the Syrian revolution
started in 2011. Then, she turned her attention to work on women’s empowerment
and support. “When the revolution started, there was an urgent need for
teaching staff, so I worked for a while as a teacher. Later, I started working
on evaluating women’s needs and then decided to work with women’s needs
fulltime. I am currently the chair of the board in the Women Empowerment and
Support Unit,” she explains.

Nivin was forcibly displaced in 2018, along
with the majority of the residents of Eastern Ghouta. She currently lives in
the city of Azaz. “It is difficult to describe my relationship with a place
from which I was forced to move. It’s much easier for a person to willingly
flee their home than to be forcibly removed,” says Nivin about her current
situation. “Ghouta is my youth, my home, my identity. In Ghouta, I felt safe
even when we were being bombed. After leaving Ghouta, I lost my sense of
belonging. I left my soul behind when I left. But Syria as a whole is still the
homeland to which we hold on tight. I was born in 1979, so I lived under the
rule of Hafez Al-Assad and the massacre of Hama happened when I was three.
Under Bashar Al-Assad’s rule, I lived through the Syrian revolution. Despite
all these tragedies, Syria remains the homeland in my eyes.”

The Arab Spring revolutions which started in countries like
Tunisia and Egypt had a strong impact on Nivin. Like many Syrians, she thought
of her country which lacked freedom and democracy. “Since the beginning, there
was no question in my mind about joining the revolution. I was totally
convinced that our demands must not be restricted to reforms only. The whole
regime must be brought down because it is a mere extension of the state
terrorism practiced by Hafez Al-Assad. Therefore, rebelling against this regime
was a necessity, not a choice,” she says. “The regime tried to tighten the
screws on Ghouta at a very early stage hoping that its people would not resist.
That’s when I decided to take part in the action supporting civil life so that
our city would not lose the essentials of daily life and people wouldn’t lost
hope. I dedicated myself to teaching and to helping my husband, who is a
doctor, in his clinic.”

“The day of our move was heartbreaking. People were gathered outside looking confounded.”

In the first few months of 2018, people in Ghouta lived a
life that Nivin calls “life in the basement.” During that period, life in the
region was totally paralyzed in the aftermath of the regime’s frenzied attacks
against vital facilities. Under the siege, Nivin testified before the UN
Security Council when she had to summarize seven bitter years into seven short
minutes. “In my testimony, I said that displacement was a crime. It is a
punishment against us for a crime we did not commit. I stressed that we refused
displacement but there was an international consensus on our displacement and
so it was.”

Describing her feelings at the time of the displacement,
Nivin says, “I had two options. Either I stay  in Ghouta, and I would be arrested as soon as
regime forces entered my city, especially after my testimony in the Security
Council, or I accept displacement. I had to choose the second. When the
decision to deport us was taken, we had no idea about this displacement journey.
There were no guarantees that our convoy would not be attacked.” Then the day
arrived. “The day of our move was heartbreaking. People were gathered outside looking
confounded. The journey lasted 27 hours filled with horrors. One child died as the
convoy was attacked by some Shabiha when we passed through an area loyal
to the regime.”

Nivin stayed in the city of Idlib for a month before moving
to live in Azaz in Aleppo countryside. Despite the psychological and physical
trauma experienced by the displaced people, the hospitability the people of
Idlib showed them made them forget their troubles, Nivin says.

About her civil and political activism, Nivin says, “I do
not claim to have a long experience in politics. We as Syrians are uneducated politically
because politics was taboo in our country. But I started to understand politics
from my surroundings. For example, women are totally absent from decision
making positions; the constitution is unfair to them; the Syrian woman cannot
give her children the same nationality as hers. These policies stemmed from our
lived reality. It is our duty then to understand the inner workings of politics
so that we can play a role in Syria’s future and help make it better.” By way
of example, Nivin talks about the election of local councils in the Damascus
countryside region. Special voting boxes were dedicated to women and they
experienced voting freely and they chose the candidates that best represented
them. Displacement, she says, has not stopped the women of Ghouta from continuing
their political activity. They united their efforts along with other women who
were keen on politics in the North. One of the main goals of the Women
Empowerment and Support Unit, which Nivin chairs, is to prepare women for
involvement in politics.

“One of the most serious challenges facing us is the lack of
a national decision making,” Nivin says about politics in Syria. “The political
process is in dire straits. The interests of international players are at odds
with each other. Even worse is our political ignorance and the reluctance of
many to enter the world of politics. In Syria, politics was strongly linked to
the ruling Baath Party and any politician was by default a member of the Baath.
This lack of experience was the result of 40 years of Assad’s rule.”

As for the challenges facing women in politics, Nivin says, “We
face many challenges, some of which are shared with men, but some are only
faced by women. For example, women can be attacked using their personal and
private lives. In a society like ours, a woman would think twice before stepping
into the limelight. The possibility of facing a smear campaign in our society
is more dangerous to the woman than the man.”

“Qualifications and past experience also stand in the way of
many women who wish to run for some political offices,” she adds. “Where on
earth could any of them have previous experience in a country that suffers from
political repression against all social groups. Let alone the social repression
in many regions.”

When asked about the Syrian Women’s Political Movement, Nivin
says that she had heard about its activities and efforts to carry the demands
of the besieged people as well as its attempts to prevent acts of displacement.
“The fact that I personally know some members of the SWPM, and deeply trust
them, made me want to join its ranks,” she says. “The members come from a
variety of backgrounds in Syria and they are active both inside the SWPM and
outside it. They all expend their efforts and experience in support of the
women’s cause. I believe that the outcome of the movement’s efforts will be
like us in that it will include all Syrians.”

“Experiencing injustice and tyranny has a profound impact on the memory. My displacement from my home, which was my emotional fortress, was one of the worst things that ever happened to me, an experience that changed my personality.”

Nivin believes that the revision of revolutionary ideas is the
basis for correcting the course of a revolution because it is still ongoing.
The revolution is fundamentally an idea and this idea always needs to be
crystallized. SWPM can and should have a role in this process of correction.
Syrians must interact with each other and work together for the betterment of
their country. Otherwise, Syria faces a grim future.

The great number of disappointments and losses suffered by
the Syrian people gives Nivin the motivation to continue her revolutionary work.
“If we had achieved any victories in our revolution, I may have stopped my
activity. But if everybody stopped working, we would leave our future to be made
by unknown powers to whom the interests of our country do not matter”, she
says.

Seeing women active in society is what gives Nivin real happiness and
makes her feel that she had succeeded in achieving something. This feeling has
become stronger since she started to interact with the women whom she tried to support
and empower. Some of these women were completely marginalized and they never
left their homes. Yet, after helping them break the stereotypes they have been
living inside, they realized the importance of their role in society. They were
encouraged to study, work and become active both socially and politically.

On another level, displacement remains the most traumatizing
experience she has suffered in the past nine years. “Experiencing injustice and
tyranny has a profound impact on the memory. My displacement from my home, which
was my emotional fortress, was one of the worst things that ever happened to
me, an experience that changed my personality,” Nivin says.

About the Syria she dreams of, Nivin Says “I dream of a
Syria that guarantees my freedom and the freedom of others, where the person
who represents me, whether a president or a member of parliament, is a
guarantor of my rights. I dream of a Syria that is fair and inclusive.”

Addressing Syrian women, Nivin says, “We can create real
roles for ourselves and take decisions that truly represent us as women. Each one
has chosen a role to play and she must do her best to fulfil it, whether in by
politics in another field. Each one of us has her own voice. No other voice
should take over your voice. We are equal partners in this society and we have
rights and duties. If our roles are downplayed, then half of the society is marginalized.
We have a country whose infrastructure and resources have been destroyed, and
it needs everyone’s help to rise from the ashes again”.