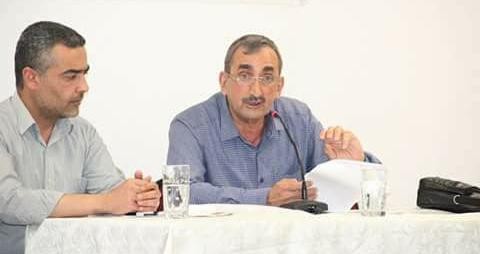 Osama Aghi: No to violence, no to sectarianism, and no to foreign interference

Osama Aghi: No to violence, no to sectarianism, and no to foreign interference

Originally
from the city of Deir Ezzor, Osama Aghi studied at the Faculty of Agricultural
Engineering in Aleppo University. He now works in the field of media, having served
as an editor for several Syrian and Arab papers and periodicals. His
publications include: three short story collections entitled al-Majnuna (The
Crazy Woman), Dhuhool (Amazement) and Mawt Barid (Cold Death), two
non-fiction books; Dimashq al-‘Araqah wal Mou‘asarah (Damascus between
history and modernity), co-authored with Waleed Mi‘mari, and Qurunful
Ahmar Zaman Al-Sahwk (Red Carnation in the Time of Thorns), as well as
three forthcoming literary monographs, dozens of studies and hundreds of
articles.

Osama moved
to Turkey in 2016 after the so-called ‘Islamic State’ took over his city of
Deir Ezzor. Recently, he established a newspaper named Ninar Press.  Describing his political background, he says,
“I was arrested in 1983 because I was a member of the Communist Labour Party. I
spent eight years and one month in prison. I was moved between three prisons: Tadmur,
Saidnaya and Aleppo Central Prison, before I was released in 1991.” One of his
two non-fiction books was written during his incarceration. His political
stance, he says, can be summarized thus: “I am a child of the secular national
political intellectual movement.”

When the
Syrian Revolution broke out in 2011, Osama supported the demands of the
protestors. However, very early on he adopted the “Three No’s” motto which meant:
no to violence, no to sectarianism, and no to foreign interference. He believes
that the revolution would not have deviated from its initial course if the
protesters had more tools and greater powers to oppose militarization and
interference from religious currents. “The revolution was likely to adhere to a
peaceful and democratic course which would have forced the whole world to support
its demands. This was the case in the early days of revolution when over 132
countries expressed their sympathy with the Syrian Revolution,” he says.
“Regrettably, the regime was able to lead the revolution astray and present it in
the garb of a sectarianism and terrorism. Thus, the Revolution’s original goals
were lost.” In his opinion, in order for Syrians to revive the original spirit
of the Revolution, they need to base their political activity on the principles
of democracy and social justice while being gender-conscious at all times.

Osama lived
under the rule of IS in Deir Ezzor for a short period during which he was
summoned by the organization’s Hisba force (Morality Police). After a
few investigation sessions, he decided to leave for Turkey.

“Feminist
ideas must be introduced into all political bodies, and work must continue
collaboratively. Women’s abilities are going to waste due to the imbalance
inherent in a male-dominated society.”

His
interest in political activity started early in life, says Osama. “My uncle was
a philosophy teacher, a writer and an avid reader. I used to listen to him
talking about politics, feeling curious to know more. Then, with help from my
uncle’s books, I started to read widely about political work and the history of
politics,” he explains. “I made my mind up and joined the Communist Party even
though I was living in a relatively religious society. During my imprisonment,
I read over 800 books on different topics in politics, economy, psychology, and
so on.”

On the
challenges facing political action in Syria, Osama says, “The existing political
parties are no longer fit for the needs of Syrians. Change can come after a
political transition, regime change, and the enactment of a new party law under
a new constitution. Only then can a new life cycle begin in Syrian politics.”
Osama believes that the need for new political parties stems from the need for developing
the paradigms of these parties, in a manner than respects human rights and
women’s rights, ditches gender divisions, and promotes equality.

About the
difficulties facing women in politics, Osama says: “All political activity in
Syria was practiced within certain limits created by the oppressive regime. This
applied to both men and women. Nowadays, there is a great opportunity for
women. Not only should they work on setting up independent political bodies for
women, but they should endeavour to introduce feminist ideas into all political
bodies and work from within.” He noted that women’s abilities are going to
waste due to the imbalance inherent in a male-dominated society.

Asked about
his views on the prospective achievements of the SWPM, Osama says, “In order to
make predictions about this issue, we need to study the activity of the SWPM on
several levels such as its reach inside Syria and specifically among Syrian women.
They are the main actors in supporting each other and in reclaiming their
role.” Whether members of the SWPM or not, he added,  women are capable of developing tools to strengthen
their movement, especially in terms of media activity aiming to draw support
from all sections of society.

“What
drives me to continue working in Syrian politics is my yearning for freedom and
dignity; the dream of living in a developed society that supports social
institutions and is open to change, a society that believes in women’s
potential and uses it.”

Osama talks
about some memorable moments from the revolution, especially the sight of large
crowds of people, men and women, protesting peacefully and chanting patriotic
songs demanding freedom, all in one voice. For him, this scene was a dream come
true.

There are
negative points, however, that he remembers from the past few years. Most
painful was the moment the revolution started to lean towards militarization
and violence. “I feel sad for the enormous sacrifices made by the Syrian
people., all civilians and mostly women and children. All of these sacrifices
were wasted by foreign agendas that shared nothing with the ideals of the
Syrian Revolution. Yet, I honestly believe that Syrian men and women still have
great potential that awaits to be utilized,” he adds.

“What
drives me to continue working in Syrian politics,” Osama says, “is my yearning for
freedom and dignity; the dream of living in a developed society that supports
social institutions and is open to change, a society that believes in women’s
potential and uses it.”

Osama
describes his dream Syria as an institution-based country which respects all
citizens, a country ruled only by law.

Addressing
Syrian women, Osama says, “Develop a legal understanding of your rights as
guaranteed by the Human Rights Convention, not as dictated by your local
society or by traditions.”