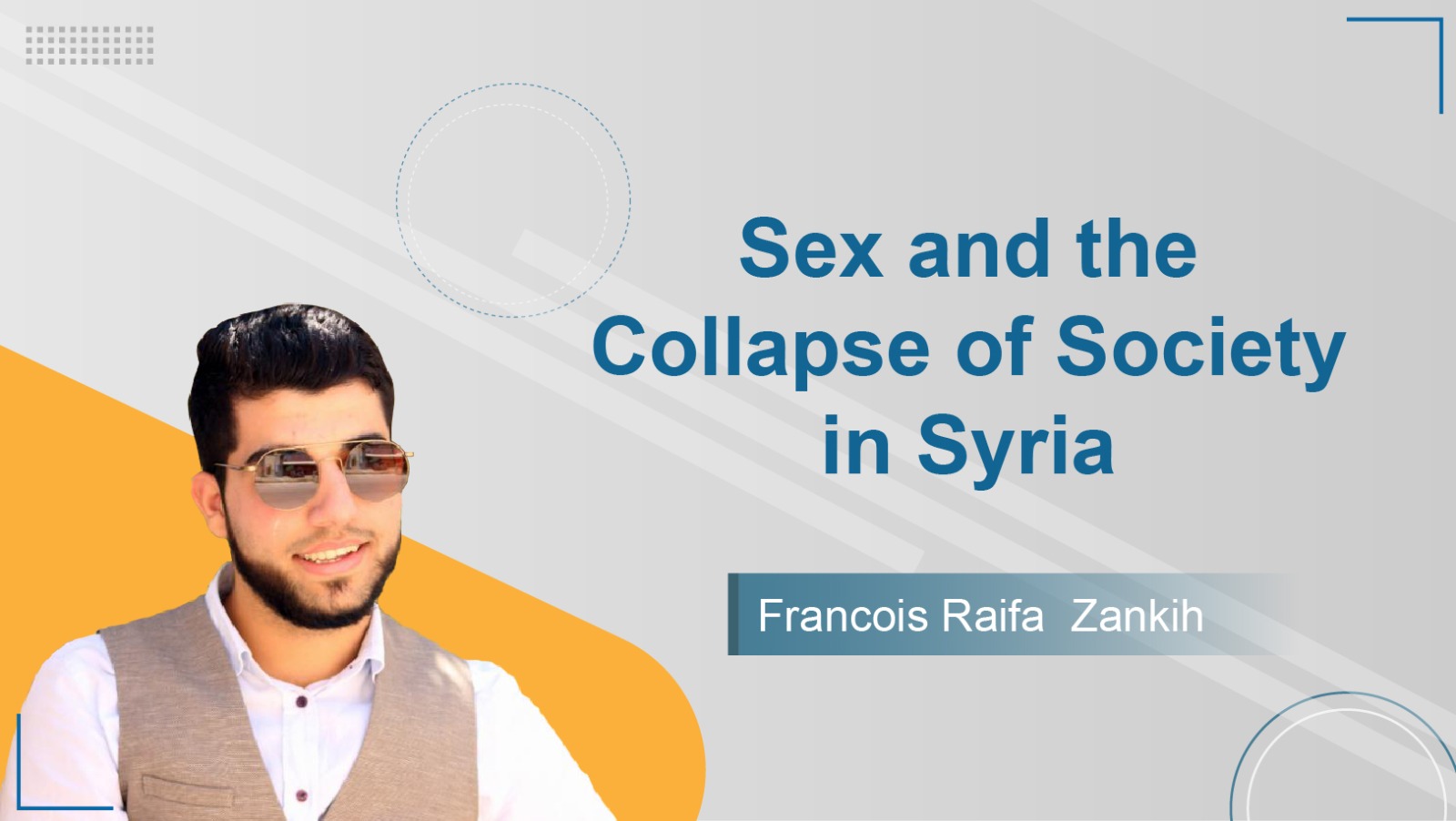 Sex and the Collapse of Society in Syria

Sex and the Collapse of Society in Syria

Sex defined as the process of communication by living organisms (human, animal, plant) for the purpose of reproduction and therefore continuation, where each species shares its inheritance with a partner, so-called reproduction or mating. The above is a simple and physical definition of sex, but if we look at how sex is handled in many Middle Eastern societies, it turns out to be a controversial, sensitive and detailed topic. It is centered around traditions and customs, and is used by some societies to restrict the freedom of groups of individuals such as women. Dealing with sex with such sensitivity and in accordance with the customs and traditions of each society is reflected in many aspects of life where many women are forced to hide their sexual preferences to the partner and are satisfied with the choices of association imposed on them by society. A large group of women also neglect their sexual health so that they are not criticized and held accountable for their personal lives, thus negatively affecting their safety not only sexual, but also psychological and physical in general.

Sexual health is no less important than psychological and physical health and neglect has serious implications for the individual and society. The silence in discussing sexual problems or questions entails many problems, such as ignorance of one’s sexual orientation and how to deal with it, exposure to disease and infection if initially untreated can lead to serious complications, sexual health education avoids misconceptions in societies, such as the marriage of minors and their exposure to pregnancy and reproduction.

Harassment is one of the most serious consequences of sexual ignorance. One of my friends once told me how, in childhood, she was molested by a woman, and she didn’t know that what a woman was doing was harassment or abuse. The molester then claimed that she introduced the child to her genitals. This incident is just a simple example of what harassment or rape can be faced by boys and girls.

But if the school curriculum included sex education, then the child would receive simplified and progressive information about the reproductive system, its functions, the nature of the human body, its differences and the reproduction process, and be offered to them by specialists in this field, how much such a procedure would have provided for children to experience abuse and trauma that could have long-term negative effects on them.

One way or another, the child will know about sex, and they will hear stories and details about it from their classmates, or from multiple sources like the Internet and others.So why doesn’t this information come from secure sources and be graded by age?

It’s a sexual or emotional attraction, in the sense that every person has a different preferred sexual type, there are people who tend to a particular body shape, so we find someone who is attracted to the curvy body, while another is attracted to the skinny body, and there are people who prefer particular skin color. Preference does not depend solely on the external form. A large group of persons attach greater importance to the way the other person thinks and the external form ranks lower. Sexual preference and keeping up with personal taste is not a cross-cutting issue when choosing a partner, Acceptance between two people is one of the conditions for the success of the relationship.

Traditional societies rarely observe personal freedom by choosing the partner that a person is interested in. Marriages are usually built according to norms and criteria established by parents and society.In some cases, the partner becomes accustomed to the other and their lives continue routinely. In other cases, disharmony creates accumulations that lead to family violence and cause psychological and physical problems to one or both parties to the relationship.The problem may worsen and end in divorce.Forcing individuals to associate and ignore their sexual preferences will only offer people with psychological problems and crises that negatively affect their lives and those around them. Large numbers of people have had to marry persons with whom they do not agree intellectually or sexually in order to satisfy their parents, society and religious systems. However, most of these marriages have resulted only in multiple family breakups and cumulative psychological crises, with negative reverberations not only for the family but for society at large.

child marriage is a crime for which the law must be held accountable, since a child cannot make life decisions before puberty and account for their consequences. Marriage of children before adulthood has serious physical and psychological consequences, inter alia, because the human body is in this stage of development. The sexual preference of each person crystallizes with time and experience and no child can determine who partner he or she wishes to have an affair with. Otherwise, sex between two people requires the awareness, knowledge and consent of both to form a healthy relationship.

According to the latest WHO statistics, 30% of the world’s women are killed by family men. In our Middle Eastern societies, for example, some women are born with a non-bleeding rubber membrane. When sex is performed for the first time, the membrane is not easily dislocated and therefore the woman does not bleed. Of course, except that everyone’s supposed to have complete freedom on their body. However, outdated customs add to ignorance of the body and its functions, and sexual differences between one person and another that particularly expose women to family and community violence, repression and guardianship, whether married or single.

In countries that are suffering from war and crisis, we see that most of them suffer from social pressures and oppression, and that most of them are under the weight of customs and traditions, with total disregard for one’s freedom and desires. These accumulations, combined with economic and political factors, ignorance and unemployment, result in individuals and entire societies that are psychologically unbalanced and are more willing to engage in the violence and tyranny to which they are subjected. This does not mean that culture and sexual freedom are the magical solution to crises, but it is certainly an important factor that will establish individuals with minimal mental health derived from the individual’s fulfilment of his or her most basic desires and respect for his or her personal choices.