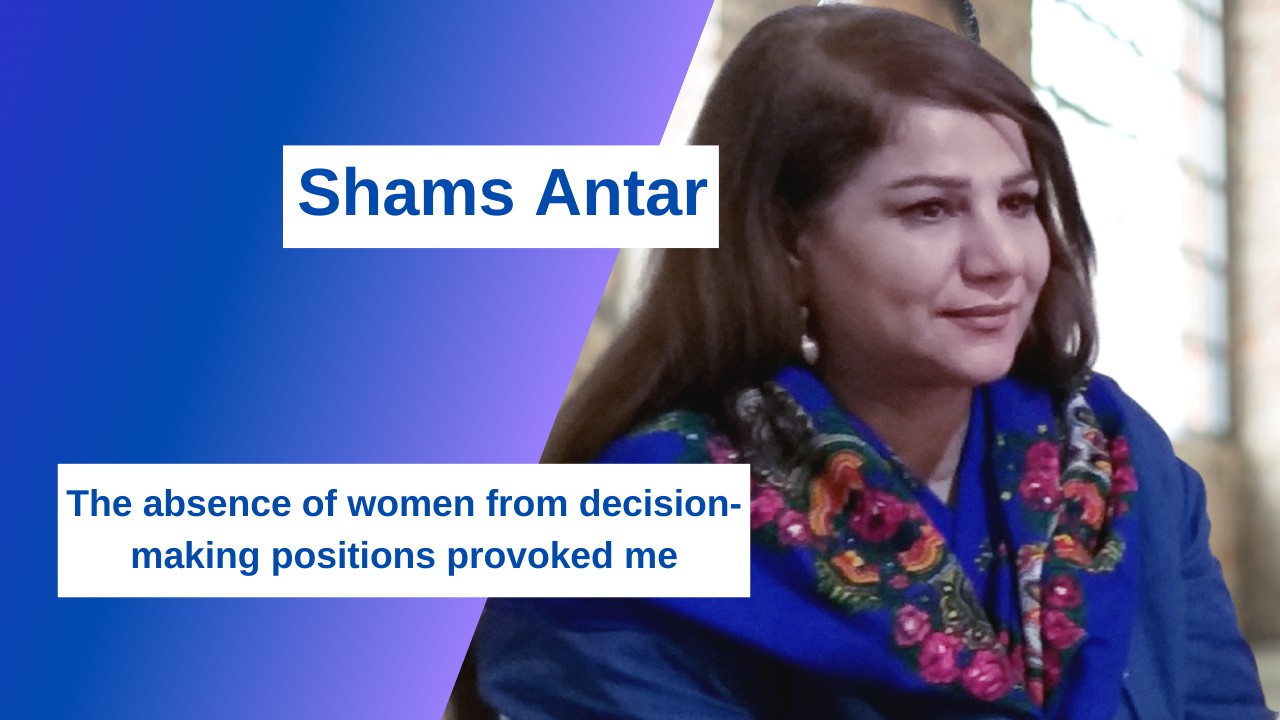 Shams Antar: The absence of women from decision-making positions provoked me

Shams Antar: The absence of women from decision-making positions provoked me

Shams Antar was born in the city of Amouda and lived in the city of
Al-Qamishli for more than 25 years. She studied in teachers the institute in
Al-Qamishli, then she continued her studies and obtained a degree in education.
Shams says “I have been
teaching for years, and recently I decided to devote myself to writing. I am a
member of the Kurdistan Authors union
Syria. I have two books in the
genre of short stories, and I am working on the third now, in addition
to my journalistic writings”.
Shams adds: “I was a
member of the Free Kurdish Women Organization, and I represented the
organization in the Kurdish National Council and left the organization two
years ago to devote myself to writing, and now I pursue any work dedicated to women and
children”.

Shams recalls her participation in the beginnings of the
revolution saying “I
did not believe it when
people started chanting ”people
want to overthrow the regime”
the fear was owned by us for decades, the Syrians did not dare, before the
revolution, to publicly
criticize the regime, in fact, the revolution came and broke the silence and
fear, we went out men
and women, side by side, calling for our freedom and dignity as Syrians, and as
Kurds who have been denied celebrations of their identity, language and culture
for decades”.

“I was provoked by the absence of women from the places of political decision-making, even the Kurdish parties that made women some of their members did not allow them to reach decision-making positions and their presence was formal.”

On her motives for participating in the revolution, Shams
says: “The state of
terror that the security forces
imposed on the Syrians were unbearable, the presence of a security element in a
place was enough to destabilize anyone, so the charges are ready and there is
no law that guarantees the protection of individuals, hence participation in
the revolution was the only way to reach a change”.

In addition to demonstrating, Shams participated in awareness-raising actions,
especially those related to women’s rights. Shams says “I was provoked by the absence of women
from the places of political decision-making, even the Kurdish parties that
made women some of their members did not allow them to reach decision-making positions and their presence
was formal”. She adds “Based on that, we have
started organizing lectures on political and gender empowerment of women, as
well as vocational courses that help women to create job opportunities”.

Shams’s interest in political work is related to the reality
of women, Shams says “When
I was chosen to represent the Kurdish Women’s Organization in the Kurdish
National Council and started participating in political sessions and meetings, the absence of
women from decision-making positions stroke
me, despite the fact that our
society is rich with
women who are capable in various fields, but Several factors gathered
to stand in the way of women reaching higher positions, including
economic, social, and religious.
The change of this reality relays in the hands of women only, by
educating themselves and demanding all their social and political rights, for
equality will not be achieved without an equitable personal status law that
guarantees the rights of all women Men”. Shams believes that women’s solidarity and support for each
other would support their position and protect their demands from fading under
the influence of male society.

On the challenges that hinder political action in general in
Syria, Shams says “the
dependence of the political decision on foreign agendas is the biggest obstacle
to creating a sound political climate. The influential people in the country are
tools for external parties driven by funding, but in regard to the challenges
that hinder the work of Syrian women in the political affairs, Shams considers
that the society’s fight against women on the basis of gender hinders any
progress, whether in the political field or elsewhere, from the principle that
you are a woman you have no right to do so, Intimidation and defamation if you
do so, the consequences will be so
and so.

Regarding her joining the Syrian women political movement, Shams says “By following
the movement on social media, I found many points of intersection between my
aspirations and the goals of the movement, I wanted to be part of a political
feminist gathering to be a voice for women in general, and women in my region
in particular, because I used to ask about women’s stories and their pain in my creative writing, and
I want to contribute practically to supporting women to restore their most
basic rights”.

On what shams
hopes of the movement, she
says “I hope the
movement will be a link between the conflicting Syrian parties to bring the
points of view closer together, and that the movement will have a role in the
new Syrian constitution and any law enacted for the country. I also hope that
the movement will pay attention to Kurdish women who have suffered multiple
persecutions because they are women first and Kurds second. These women need great empowerment
and support”.

‘‘The change of the reality of women relays in their hands only, by educating themselves and demanding all their social and political rights.’’

Shams believes that the priority at the moment is to stop
the military operations. She says “We have lost many of our young women and men”. As for the Syria that she dreams of, she
says “I dream of a Syria for everyone, from all backgrounds without
discrimination, that everyone be equal before the constitution, and that
religious classifications are removed from political life, so that persons will
assume positions according to their competence,  and that those calling for federalism are not seen as Separatists.and first
and foremost I dream of
a democratic Syria, where the
authority protect the people and stand up to their interests, not to intimidate
them, and to create a real civil society that defends individuals if any
injustice from the government occurs to them.

And to
Syrian women, Shams says “There
is no room for barriers between us, no regional, national, religious, or other.
Our true demands are the same. We want to regain our role while respecting the
role of men, with no one has
an advantage over the others.
We are peace advocates, peace seekers and peacemakers.

On the depressing situations that Shams went through, she
says “I feel sad when I remember the insulting statements made by
some people affiliated with the opposition, about the Kurds”.

As for the most beautiful situations that Shams lived during
the past nine years, she recalls the day of the martyrdom of Meshaal, the
people of Homs and Hama came out chanting his name and raising signs bearing
the name of Amuda and Al-Qamishli, these cities and its Kurd people were marginalized and unrecognized. In
addition to my joy when the Kurdish National Council joined the coalition, we
began to see Kurdish representation in Syrian political bodies.