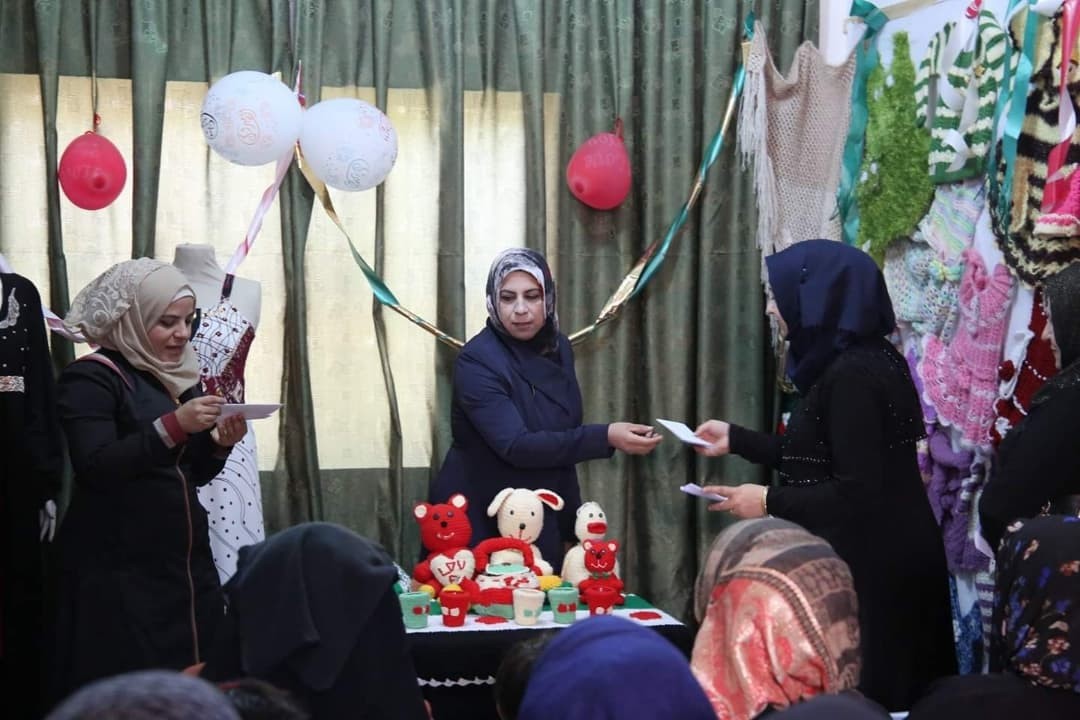 Soad Al-Aswad, Hand in Hand to Make the Change

Soad Al-Aswad, Hand in Hand to Make the Change

Before the revolution, Soad Al-Aswad was a housewife, completely dedicated to raising her six children, but with the beginning of the revolution, she decided to work as living conditions became difficult and because she wanted to help other widows in need of work. So she wanted to share her experience with them and teach them a profession that enables them to access the labor market and make a living. That is how the idea of founding the Change Makers center came out. Soad says that because of her love for science and her contact with communities that she did not know before the revolution, she started to receive trainings and engage in courses on transitional justice and human rights, along with the women working in the center, without excluding the professional aspect that is still ongoing in some camps, where the majority of women are illiterate and in need to learn this type of work. At the same time, the center offered a series of trainings in the city of Kafranbel on advocacy for nonviolence and peacebuilding.

Soad is living in Kafranbel and she says about it, “it is my homeland, my belonging, my roots, and my children.” She refuses to travel or leave unless her children’s lives become in danger. She faces challenges just like other locals in the city, such as fear of the regime and its henchmen, but for her the biggest challenge is to prove themselves as working women and continue their work.

At the beginning of the revolution, in 2011, Soad says that although her participation along with other women was limited to watching peaceful demonstrations from the roofs of houses, because she is living in a conservative society where women were not allowed to go out and raise banners at the time. However, her motive for the participation in this revolution was getting rid of an oppressive and dictator regime that deprives people from wealth and prosperity of the country, and disregard people’s civil and human rights. The regime, during the revolution, proved that it is a criminal regime that is killing its own people only because they peacefully demanded freedom.

“The beginning of my political engagement was by joining SWPM, because I wanted to continue my work in empowering women. I aspire to contribute to realizing equality between men and women at all levels, including the political level, reaching equal representation in decision-making positions like men.”

The revolution marks the beginning of her interest in politics, as she started to watch all local and international news related to the revolution, “As women and housewives, our conversations changed from topics like cooking and shopping to political discussions”. Soad adds that she began her political engagement by joining the Syrian Women Political Movement (SWPM), because she wanted to continue her work in empowering women. She aspires to contribute to realizing equality between men and women at all levels, including the political level, reaching equal representation in decision-making positions like men. Soad says that she expects SWPM to achieve a lot at the political level, believing in the ability of women to make an impact and their determination to realize their goals and help other women to learn and restore their rights. She also believes that SWPM reflects the voices of the women inside Syria and it endeavors to realize their demands as women as well as realizing general demands.

Soad believes that up till now the environment is not suitable for political work inside Syria. Achieving that requires continuous work, determination and belief in our ability to reach our goals of making Syria a democratic country, where citizens can have all their civil rights and they are equal before the law. Talking about the challenges facing her work as a woman in politics, Soad thinks that the biggest challenge is putting women in fixed frames, belittling the role of women, looking down at what women can accomplish and the prejudging them, hearing statements such as “If men couldn’t solve the political problem in Syria, how would women be able to do so”. But years of work in political arena, you can see that this unfair view of women is changing, after women earned their position and succeeded in all fields, including politics.

“I am proud that I witnessed firsthand lots of success stories achieved over the past years by women who worked and challenged hard conditions and proved themselves strongly.”

Soad says that dialogue and joint action are two of the most important ways we must follow to defend our cause. When women inside Syria feel that there is someone working to communicate their voice and lift injustices practiced against them, this will give them a strong motivation to steadfast and face all challenges they are facing at all levels. She adds that she is proud that she witnessed firsthand lots of success stories achieved over the past years by women whose husbands were killed or detained. Those women had to work and challenge the hard conditions, they showed resilience and proved themselves. At a personal level, Soad says that since she is coming from a conservative community that didn’t allow women to go outdoors without a male family member accompanying them before the revolution, she was very happy when she was invited to travel to Turkey with members of the local council, although she was the only woman among them. Her husband agreed to that and even supported her strongly to continue. “I consider this step to be a great achievement. Before the revolution, I wouldn’t imagine going out for 10 kilometers alone without a man with me” she says.

Soad says: “Women of Syria: you are strugglers, strong and great women. You experienced oppression, injustice, deprivation and the detention of your children, your husbands and your fathers; this patience and endurance shall not be in vain and you will reap the fruit. We are going on; we are stronger together; we must be a role model for the women of Syria and the world, because Syrian women became well-known for their strength, resilience and strong will. The more we are together, the stronger we get; we and the generations to come

Soad dreams of a free, safe and democratic Syria, where there is no fear of expressing one’s opinion or saying the truth.