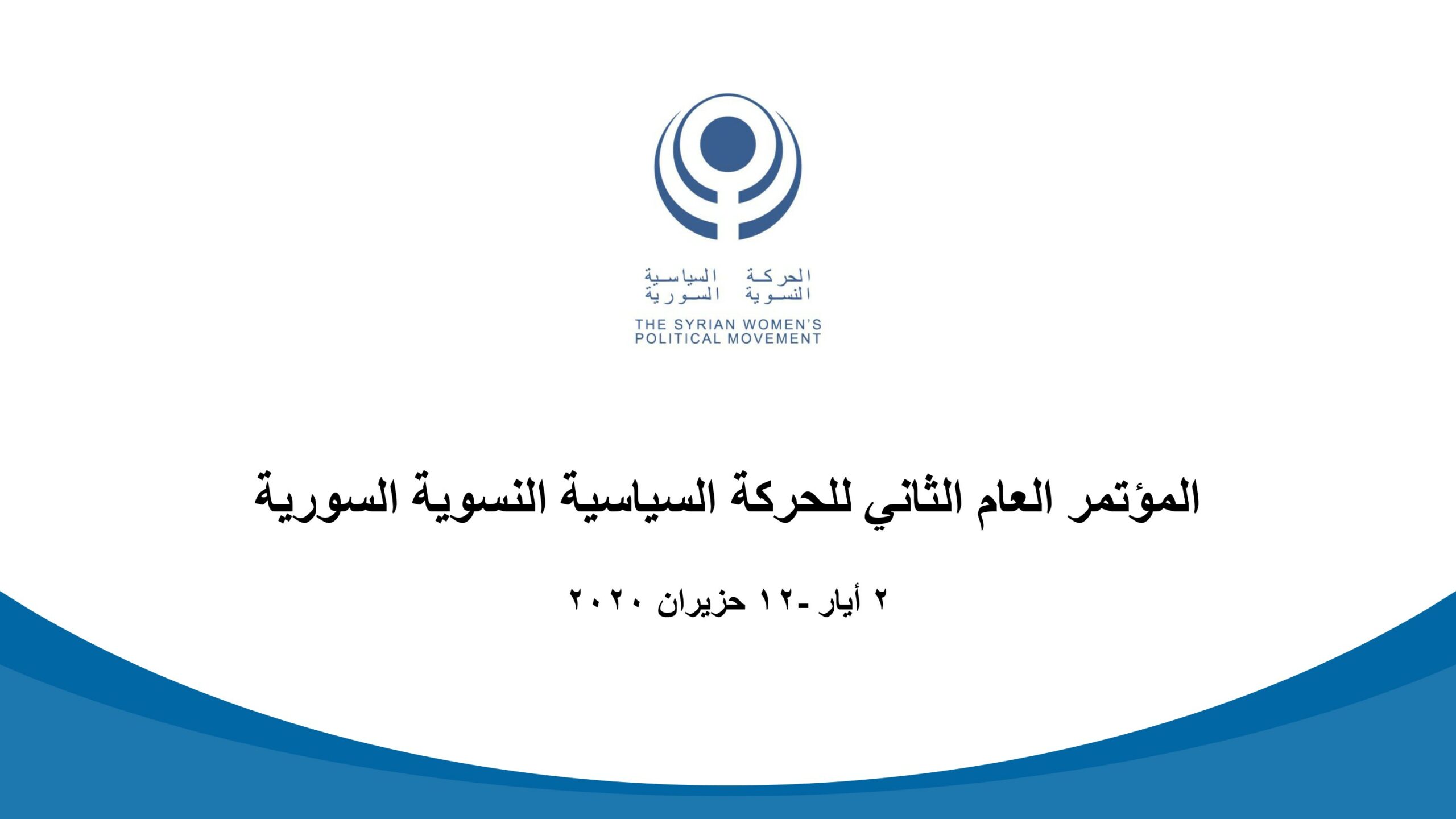 The SWPM launched the activities of it second General Assembly meeting on a virtual platform on Saturday 2 May 2020.

The Meeting was organized over six sessions through 12 June 2020, which included  presenting and approving of the political report, the feminist report, and the political vision, and discussing all those in addition to the Syrian and regional situation.

The sessions also discuss the SWPM feminist report which is an observatory report on Syrian women’s participation and engagement in politics, political parties, and other bodies over the last year.

Dima Moussa, one of the General Secretariat members, kicked off the Meeting and went over the first session’s agenda. SWPM member Afraa Jalabi delivered the opening speech, welcomed the participants, and called on all SWPM members to continue their work to pursue more achievements, activities, and initiatives in every way possible that aim to attain the Movement’s goals.

The opening speech also raised several pivotal questions as an introduction to the feminist political discussion. Afraa pondered: “what does this world look like? This world in which Balqis is still a refugee, a prisoner, an expatriate, and a mother or wife of a martyr or a forcibly disappeared person?” after she called on everyone to reflect deeply on the conditions of the world where the throne of women has been usurped.

Ms Jalabi stated that we would not understand the conditions of women without understanding the intersection of political and religious forces that usurped the women’s throne and excluded them from decision-making. Our cultures and social systems are designed to deny women their throne and to justify and legitimize their exclusion from power. Our cultural frameworks and styles use all means to give this marginalization of women (and the other) a dimension of holiness as well as a form of historical inevitability.

The second session, which took place the following week, covered presentations of the administrative team’s report and its work mechanisms.

The third session was devoted to the General Secretariat’s political achievements, covering the period since the first General Assembly meeting till this Meeting. General Secretariat Member, Mariam Jalabi presented the SWPM political and regional participations and consultations whether bilateral visits or international conferences and events.

Ms Nassif presented the program’s idea, its development, activities and importance, as it plays a critical and decisive role in reflecting the opinions and voices of women, consulting with and engaging them on key issues in the Syrian context. She further noted how the outcomes of these consultations feed into the political process and reflect women’s vision about Syria-related issues, whether now or in the future.

In this context, the SWPM had launched four policy papers during events in several countries. These papers are the outcome of the Movement’s National Consultations program with women from different parts of Syria, and they tackle several topics including the constitution, the return of displaced, and reconstruction. These papers are available on the SWPM website.

During the sessions, important discussions and debates on SWPM up-to-date work took place, and some recommendations were proposed to increase involvement of more SWPM members and ways to develop the work in light of the current circumstances relating to the COVID-19 pandemic and with respect to Syrians’ presence, particularly SWPM members, all over the world and all parts of Syria.

The Meeting continues until June 12 and will be concluded by electing new General Secretariat members.

On the last day of the Meeting, June 12, the SWPM will hold an open session with the participation of international and Syrian partners and friends, in addition to members of the media and press. This session will cover a review of the Movement’s achievements during the past year and the outcomes of the Second General Assembly meeting, then guests will have an opportunity to participate in the dialogue and direct questions and/or comments to the SWPM members.

It is worth mentioning that SWPM had invited its members to its Second General Assembly meeting, which was set to take place physically in March 2020, then had to cancel it due to the COVID-19 pandemic; the Meeting was reorganized and restructured to be held online due to this global crisis. Kindly refer to the Movement’s statement on the postponing of its March 2020 original date on the SWPM website here.