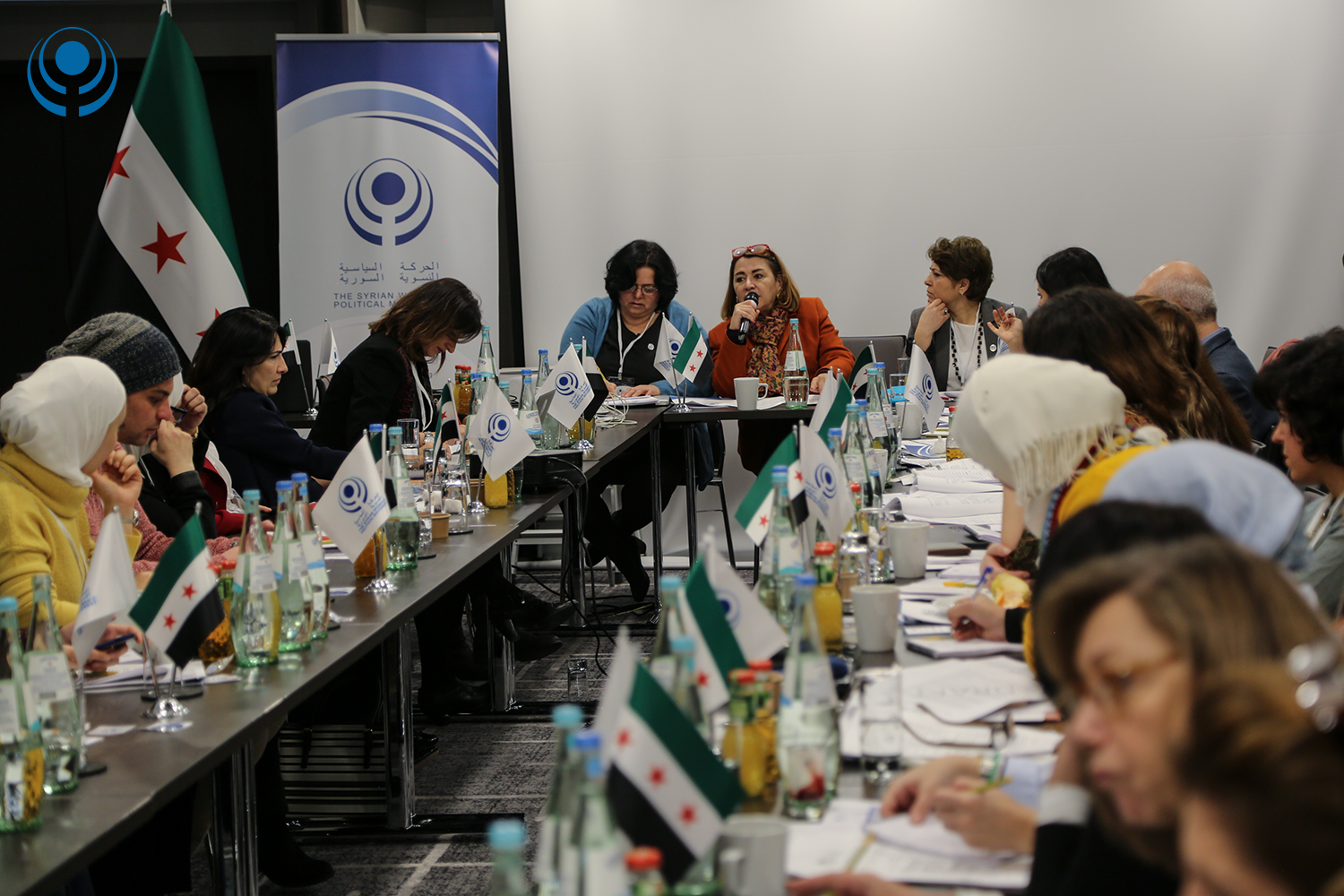 The Syrian Women’s Political Movement (SWPM) held its first general assembly meeting in Frankfurt, Germany, from the 12th till the 14th of January 2019.

During the meeting, the outgoing General Secretariat – elected at the founding conference in October 2017 – presented reports of its work overall and the Movement’s activities since its founding, including the political, organizational, financial, and media reports and other relevant activities, in addition to the political vision that the Movement has endorsed since its establishment. The outgoing General Secretariat also addressed the challenges the Movement has faced during this period and how they were addressed.

The Movement reiterated its commitment to continue working on:

1-      Preservation of Syria’s integrity, land and people, within a pluralistic democratic state, a state of full and equal citizenship for all regardless of sex, religion, ethnicity, and any other affiliations or classifications; a state that guarantees the peaceful transfer of power without any form of authoritarianism; and rejection of any foreign power presence on its territories – all through a political solution in accordance with the Geneva Communiqué and relevant UN related resolutions.

2-      Drafting a constitution that guarantees the rights of all citizens – women and men – and creating a safe and neutral environment as a cornerstone for any referenda or elections carried out by the Transitional Governing Body.

3-      Commitment to pursuing guarantees of equal citizenship for all Syrian women and men in the constitution, laws, and policies without any discrimination on any basis whatsoever, and devising the appropriate mechanisms to ensure the application thereof.

4-      Pursuing equal participation of women and men at all levels of decision-making, as well as finding the mechanisms to ensure achieving the proposed minimum quota of 30%.

5-      Considering the issue of detained and forcibly disappeared women and men, by the regime and other parties to the conflict, a political and humanitarian issue which must be resolved first to create a safe and neutral environment; in addition to highlighting the continued detentions by the regime in the areas where it has regained control, as well as in other areas where other parties have committed similar violations.

6-      Highlighting the regime’s and other parties’ practices, such as coercing individuals to participate in the armed conflict, which increases the fragmentation and suffering within the Syrian society, in particular women.

7-      Linking reconstruction and its ramifications with practical, real, and credible steps leading to political transition.

8-      Exposing the systematic demographic change practices by the regime (law no. 10) and other parties to the conflict whereby civilians are not allowed to return to their original areas of residence.

9-      Communicating and coordinating among all Syrian regions and cities, regardless of the dominant de facto authority, particularly the regime, and devising nonviolent means of struggle to combat totalitarianism in all its forms, in order to achieve freedom, dignity, full democracy, and human rights, including women’s rights.

10-  Rejection of policies of coercive repatriation before the creation of a safe and neutral environment, until such repatriation is voluntary; and pressuring international bodies and governments to improve the conditions that refugees face, particularly denial of basic services and the right to education.

11-  Dealing with repatriation as a political issue that cannot be subject to either blackmail nor exploitation.