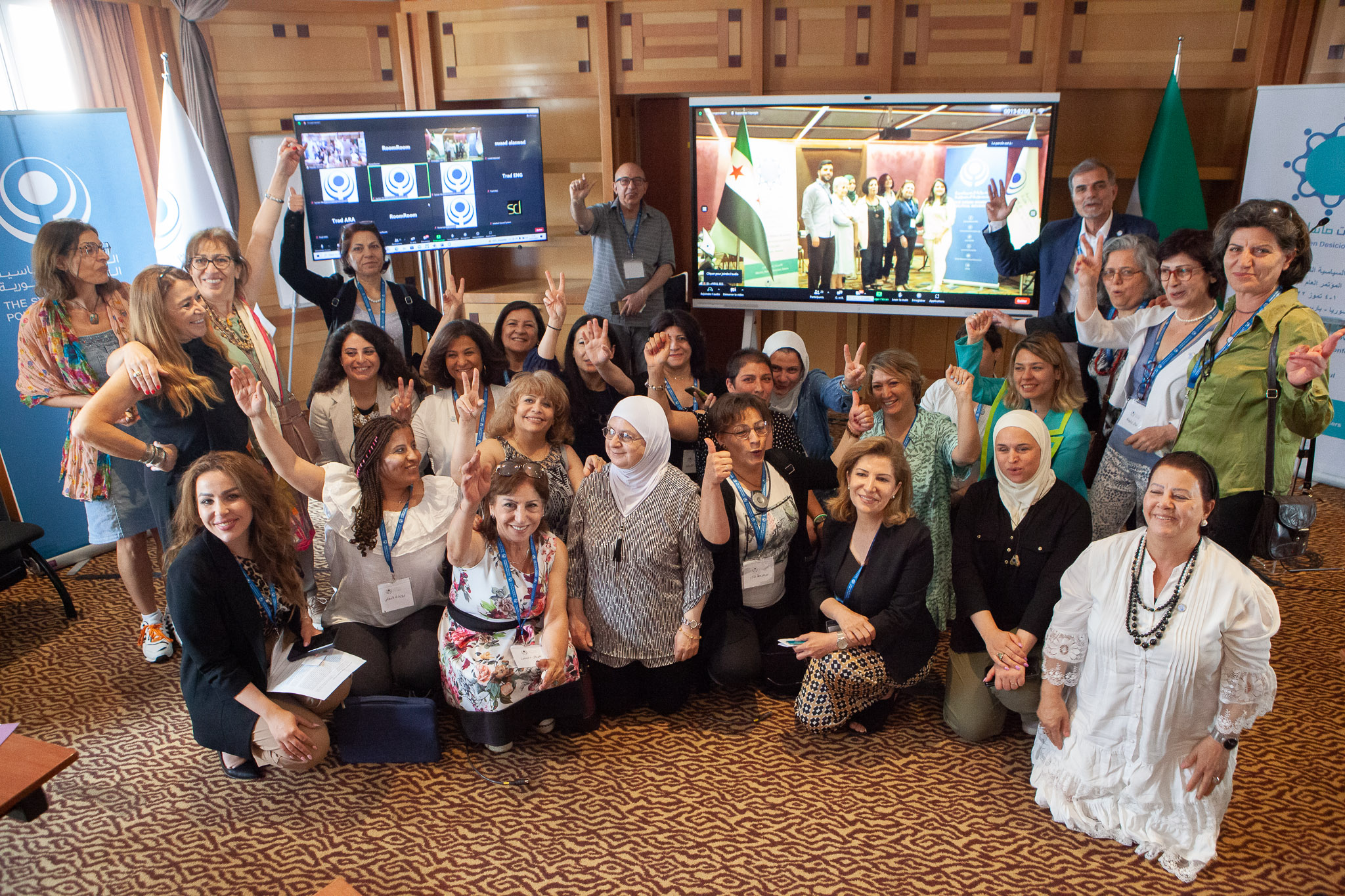 Under the slogan “Syrian women decision-makers”, the Syrian Women’s Political Movement held its fourth conference in Paris and Istanbul, and virtually from different regions inside and outside Syria, with a total number of attendees of 71 members.

The conference opening session was with the “Wave” exhibition, with guests from the Syrian cultural and political community in Paris, and a parallel virtual interactive exhibition was launched on the movement’s website. This exhibition comes a decade after the Arab Spring and its repercussions on the current feminist wave, shedding light on the impact of the Syrian Women’s Political Movement, five years after its founding, in breaking the stereotyped image of women’s positions in decision-making.

The General Assembly attending members discussed the reports of the organisational and supervisory committees and elected a new general secretariat and a supervisory committee. It also discussed, over a whole day, its annual political report that presented and analysed the local, regional and international updates and the Syrian situation, hence, concluded with the following results:

1- The Syrian Women’s political movement believes that the political stagnation in Syria led to catastrophic repercussions on the Syrian people, especially women, children, and marginalised groups, and it reaffirms that Security Council Resolution 2254 based on the Geneva Declaration 1 and Resolution 2118 is the only internationally approved road map for a solution and political transition for the future Syria.

2- The SWPM considers that situation in all Syrian regions is not safe, and that what is arranged regarding the return of refugees by some countries is considered a forcible return that puts their lives at risk, SWPM affirms that their return must be voluntary, safe and dignified to their original places of residence.

3- The SWPM states that the steps taken, and the attempts by some countries to rehabilitate the  Syrian regime, are ignoring the rightful demands and sacrifices of the Syrian people and undermining the chances of building sustainable peace that can only be reached by achieving justice and holding the perpetrators of crimes against the Syrian people accountable.

4- The Syrian Women’s Political Movement affirms that the case of detainees, and forcibly disappeared persons is a humanitarian case that must remain outside political negotiations. That pressure should be practised on the Syrian regime and all parties to find a radical solution to this case by releasing all detainees and revealing the fate of all disappeared and forcibly disappeared persons. The SWPM also stresses the need to hold the perpetrators of these violations, regardless to which party they belong, accountable.

5- The Syrian Women’s Political Movement believes that the regime held the Syrian people responsible for the consequences of the sanctions imposed on them, which in turn led to holding it as well responsible for the collapse of the state and its institutions. The SWPM believes that although sanctions are a political pressure tool, they are not the only means and must be accompanied by other pressure tools to implement international resolutions to reach a comprehensive and just solution that ends the suffering of Syrians.

6- The Syrian Women’s Political movement believes that the suffering of Syrian men and women in all camps is getting worse daily and that women and children, in particular, are vulnerable to all forms of violence, extortion, and discrimination. With regard to the “Al-Hol” camp, in particular, the SWPM believes that placing these families, especially children, under these current circumstances, is setting a time bomb for the region, and calls for closing this file by holding the countries where these citizens reside accountable for these camps.

7- The Syrian Women’s Political Movement believes that perpetuating the plans for demographic change which have taken place and are taking place throughout the Syrian geography, and imposing it as part of the solution on the Syrian people, will have catastrophic repercussions on social harmony and peace and the unity and integrity of the Syrian territories.

8- The Syrian women’s political movement believes that the form of a decentralised state is most appropriate for the future of Syria, in a way that guarantees the rights of all components of the Syrian people and preserves diversity and cultural richness, and the equitable distribution of wealth and the unity of Syria’s land and people.

9- The Syrian women’s political movement believes that the collapse of the education system and its division between the multiple ideologies of the various de-facto authorities threatens to weaken the single Syrian identity. The movement fears hindering the education programs by increasing rates of child labor, recruitment, and marriage of underage girls, and other concerns related to child protection. the SWPM stresses the need for governments and donors to start supporting sustainable educational programs, in coordination with the United Nations, to make a stronger push to facilitate a more sustainable and quality academic response in coordination with the United Nations, NGOs, and relevant authorities to help stabilise Syria and facilitate its recovery.

10- The SWPM condemns the Russian military invasion in Ukraine, and its economic and political repercussions on the Ukrainian people and the world as a whole, which decreased the urgency of the Syrian issue on the list of international priorities. This intervention revealed the real depth of the conflict between the democratic and authoritarian systems in the world.

11- The SWPM denounces the use of the crossings through which humanitarian aid is brought in as a political card by Russia and its allies, and considers its attempts to prevent the entry of aid through  Bab al-Hawa crossing in northern Syria as a humanitarian catastrophe that threatens the lives of millions of Syrians, most of whom are women and children. Therefore, the SWPM believes that it is necessary to find alternatives for the continuous entry of humanitarian aid into areas outside the control of the regime without linking it to the approval of the Syrian regime.