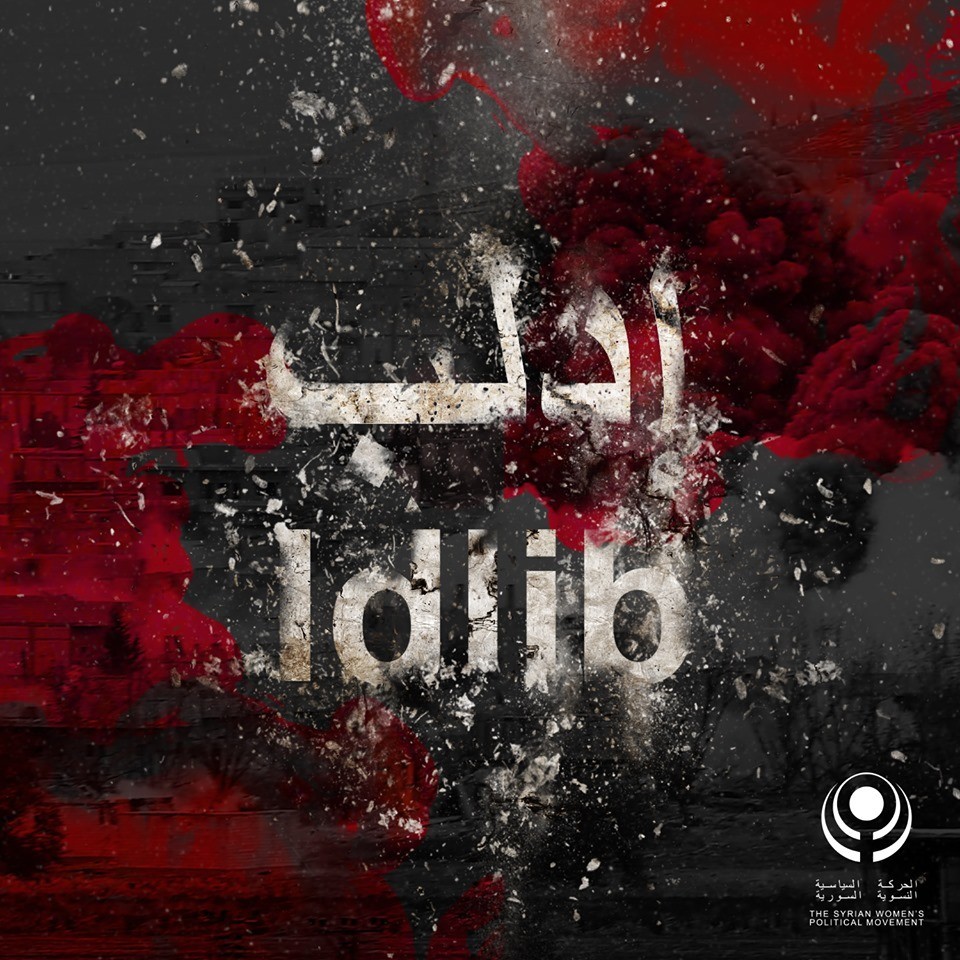 The Syrian Women’s Political Movement observes with the gravest concern the military escalation by the Syrian regime backed with the Russian Aris force in Idlib and its countryside northwest Syria, this attack is the gravest and the most violent since the beginning of the series of military campaigns in Idlib since 26 may 2019 and lasted for the following months. The military campaign reached its crucial phase with the new year when it expanded to include Maarat al-Numan, the second largest city of Idlib, and the M5 road. The violent bombing also took place in Saraqib, Jabal al-Zawiya and Ariha in the context of the regime’s attempts to seize, subjugate and control these cities after their destruction.

The Syrian Women’s Political Movement also notes the regime’s breach of the four armistice agreements reached over the past years in north-western Syria, the most recent of which was the ceasefire and the armistice declaration announced on January 10, 2020. The ceasefire includes air and ground attacks, intending to prevent more civilian casualties and to avoid the occurrence of New displacement, The SWPM notes that the Russian side, which is considered a guarantor of the armistice, is participating in its violation by its air and military support for the regime.

The SWPM denounces the continuous gross violations of human rights and the horrific crimes that amount to war crimes committed by the regime forces and its Russian ally, as human rights organizations have registered more than 60 massacres in the region since its date, some of it occurred after the activation of last ceasefire agreement on January 12 until January 27 2020.

The last military campaign launched by the Syrian regime forces with Russian support since December has displaced more than 350,000 people from southern Idlib towards areas to the north according to United Nations reports, and among these displaced, 38,000 persons who fled between 15 and 19 January, the majority of them are from western Aleppo.

The Syrian Network for Human Rights said in its report issued on January 27 “at least 87 civilians have been killed since the beginning of the Russian-Turkish ceasefire agreement on January 12, 2020. The report recorded an air attack by the Syrian Air Force’s fixed-wing aircraft on Wednesday 15 January 2020; according to the report, the attack killed 22 civilians, including two children. Among the victims was a member of the Syrian Civil Defence, and about 68 others were wounded”. The report notes that “this massacre is the largest in terms of human loss, and comes after three days. Only from the alleged cease-fire declaration”.

The Syrian Women’s Political Movement notes that approximately half of Idlib’s three million population are civilians displaced from other Syrian governorates and cities, and targeting Idlib means displacing them again.

The Syrian Women’s Political Movement indicates that the continuation of the campaign means an increase in the number of victims and the destruction and brings us to a new humanitarian catastrophe in Idlib added to the tragic conditions civilians are already suffering there due to the complete lack of the basic life requirements such as water, utilities and heating.

The Syrian Women’s Political Movement calls upon the international community and the Security Council to practice pressure on all parties to immediately cease any attacks against civilians and civilian objects as such, including attacks against medical facilities and personnel, and any indiscriminate use of weapons, including through shelling and aerial bombardment. SWPM also calls on the international community, the United Nations, its organizations and bodies to take immediate action and response to this humanitarian catastrophe of the displacement of tens of thousands of Syrians, most of them are children and women who are forced to leave their cities and towns to safer areas. The Syrian Women’s Political Movement also calls on the Security Council and the United Nations to take action to protect civilians and secure corridors for humanitarian and medical aids and basic life needs and stresses on the need to renew Security Council Resolution 2165 (2014) which authorizes the addition of humanitarian aid to Syria without a permit from the system. The Syrian Women’s Political Movement calls on the United Nations, its organizations and the Security Council to practice pressure to provide safe corridors that guarantee the safety and protection of civilians trying to escape to less tense areas.

The Syrian Women’s Political Movement recommends the necessity of issuing an international resolution aimed at stabilizing the cease-fire in Idlib, and that it includes accountability for all violators of the ceasefire and the need to refer the Syrian file to the International Criminal Court and hold all those involved, including the Russian regime accountable after its involvement in committing war crimes, was proved.

The Syrian Women’s Political Movement holds the international community responsible for the catastrophes and massacres Syria and the Syrian people are enduring.

The Syrian Women’s Political Movement calls upon the UN, the Security Council, and the international community to act immediately to end this brutal campaign and activate the Political process that shall lead to a comprehensive political solution under the Geneva Communiqué and UNSCR 2254. We also call upon them to put an end to all massacres against the Syrian people.

May martyrs rest in peace, detainees and disappeared persons be free, and our great people emerge victoriously