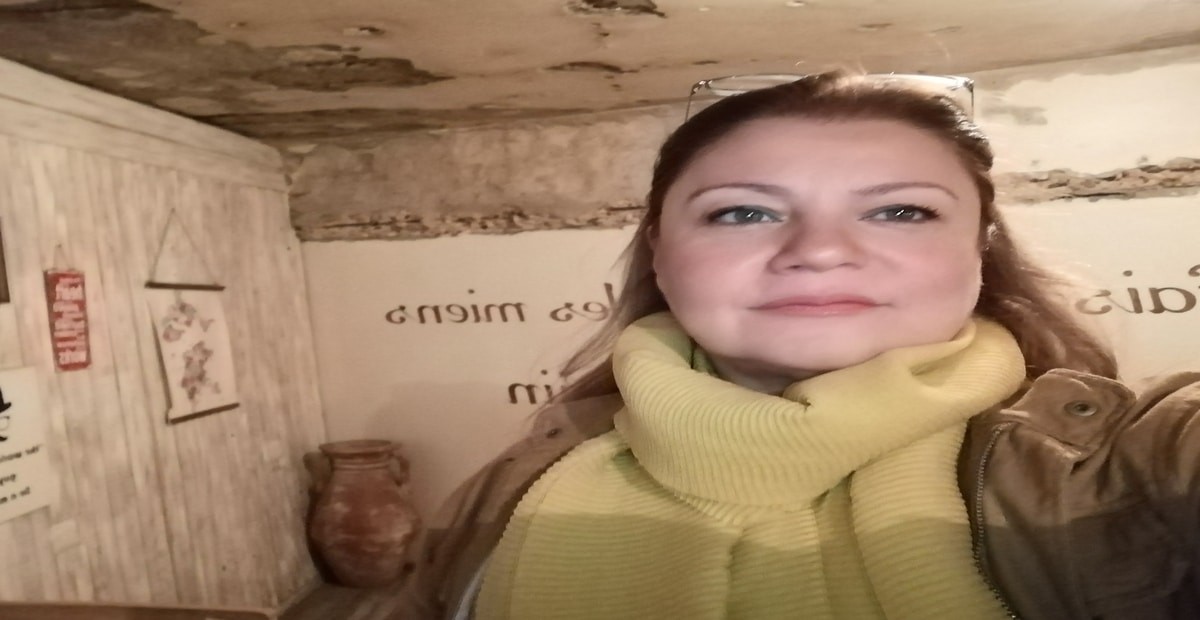 Suzan Khawatmi, I have been with the revolution since the first moment, with every voice demanding freedom and dignity

Suzan Khawatmi, I have been with the revolution since the first moment, with every voice demanding freedom and dignity

Suzan had
been living since the 1980s in Kuwait where she worked as a cultural editor.
She wrote for several Kuwaiti papers and journals. She has published five short
story collections and one novel. In 2018, she moved to live in Mersin, Turkey.

“It was
heartbreaking for me to compare between countries that were striding towards
development and modernism on the one hand and Syria which was witnessing a
period of moral and material deterioration, on the other. We Syrians have lived
through a process of subjugation. We were not allowed to ask why our country
was turned into a private venture run by senior government officials. We had no
right to criticize or object to anything especially in politics. The walls had
ears in Syria.”

“My
relationship with my home country was that of an expatriate visiting
occasionally to meet relatives and loved ones,” she says. “The last time I
visited Syria was in 2010, a few months before the revolution started.”

About
joining the revolution, she says, “I had detached myself from politics. I don’t
remember ever following the news. Then the revolutions started in Tunisia and
Egypt and my eyes were glued to the TV screen. I followed every detail of the
demonstrations of the Arab Spring, often wondering how the people managed to
break free and rebel against the rulers. Was this a dream come true?”

“At the
beginning of the revolution is Syria, I was in Kuwait,” she says. “I followed
the first protest in Damascus via social media. I was amazed by the courage of
the demonstrators, some of whom I knew personally. I belong to a generation
that was fed on fear and taught to stay quiet. I feared the regime’s brutal
crackdown, which did happen. I had not forgotten the events of the 1980s and their
aftermath especially in the city of Hama. Despite being far away from the
people protesting on the streets of Syria, I felt empowered by them. I believed
that we were able to stand up to the iron fist of the police state. I felt that
we should confront this oppressive ruling party which corrupted every aspect of
life in our country, and systematically spread ignorance among the Syrian
people who had a rich cultural heritage and invaluable resources.”

“I have been
with the revolution since the first moment, with every voice demanding freedom
and dignity, because it is a just cause. In the end the rulers will go away and
it is the people who shall stay.”

About her
contribution, Suzan says, “I participated in the revolution with the thing I
was best at, writing. I wrote about the revolution and about the Syrian
situation in my opinion pieces, my novel Rub‘ Waqt (A Quarter of the
time), and in my short stories. In 2012, together with 9 other Syrian and
Kuwaiti friends, we started a voluntary charity called Jasmine House. We
used to sell Syrian home-made foods in charity bazaars and give the proceeds to
refugees living in camps. In 2015, the group changed its focus to supporting
education. We opened two schools in al-Qadriya camp in the Western Beqaa
district of Lebanon. Even during the current financial crisis in Lebanon, the
project is still helping to teach 341 children in primary school age. It also
offers job opportunities for teachers living in the camps.”

“My family
and I are still adapting to our new life,” she says about moving to live in
Turkey. “It is no easy feat; we have to learn a new language and live in a new
country. But my feelings of loss are more difficult. I feel as if I lost my
faith in the real meaning of the word ‘home’. A Syria ruled by Bashar Al-Assad
and the Baath Party is not a home. Let alone thinking about the losses suffered
by Syrian men and women who are being killed, displaced and tortured on a daily
basis.”

‘‘If women were marginalized under the rule of Al-Assad family, this was not due to a lack of capacities among Syrian women, but it was the result of a constitutionalized and systematized silencing of the entirety of the Syrian population. The traditions of a male-dominated society only added more restrictions on women.’’

About what
awakened her interest in political activism, Suzan says, “As I followed the
developments in Syria since 2011, I had the urge to be involved in public
affairs in one way or another. I started to join movements and organizations
which were supporting the demands of the Syrian people in building what the
late actress May Skaf called ‘Syria the great’”.

Suzan joined
the SWPM because she knew the importance of giving women their rights and the
need to demonstrate women’s contribution to the revolution, and the SWPM aims
to empower women’s participation in politics. Convinced that mere verbal
support and sympathy do not suffice, she believes that women should and must be
part of all political bodies and the decision-making process. If women were
marginalized under the rule of Al-Assad family, this was not due to a lack of
capacities among Syrian women, but it was the result of a constitutionalized
and systematized silencing of the entirety of the Syrian population. The traditions
of a male-dominated society only added more restrictions on women.

Suzan believes
that the most significant challenges facing political work in Syria are the
lack of a safe and encouraging political environment, in addition to the fake
political role played by the current political parties working inside Syria under
the aegis of the police state. Moreover, Suzan adds, the culture of
accountability is completely unpracticed in Syria whether within parties, in
parliament or in any other political form. The Syrian people’s lack of
experience in exercising their political rights was reflected in the behavior
of most political bodies in the opposition.

As for the
challenges facing women in politics, Suzan says: “Women’s
presence in politics has always been called into question. They are often
included as a symbolic gesture. If we assume for the sake of argument that
women have not played real political roles previously, this was because of
their continued marginalization and attempts to suppress them in various ways.
Even those who claim to be championing women’s rights, do not actually apply
this to the ballot box or when voting for their representatives in any
political platform.”

“Women have
always been stereotyped and their roles have been restricted to taking care of
their family and giving birth to children. Perceptions of a woman’s
contribution to society were limited to her being a wife and a mother. This
typecasting of women has destroyed the achievements made by women since Syria’s
independence from France, as well as the gains made by educational
organizations and women’s societies which had worked on securing women’s rights
in education, work and political participation before the representation of
women was monopolized by the state-led ‘Syrian Women Union’ whose activities, since
its foundation until the decision to dissolve it in 2017, were limited to
applauding the government, and organizing sewing and hairdressing courses. The feminist
representation in the Syrian revolution strives for Syrian women to become an
active part of society by protecting their rights to citizenship and equality.
These are simply rights and should not viewed as favors bestowed upon women.
Women are capable of achieving success in all fields.”

“We need to create an environment of dialog among ourselves as Syrians. We are no longer two distinct teams: pro-regime or against it. We have all become pawns used by other players who are working against our interests and wishes.”

Suzan
believes that the only way to correct the course of the revolution is to stop
the current loyalties of Syrian parties to foreign forces like Turkey, Iran,
Russia and others. It has been proven time and again that these countries care
about nothing but their national interests even if this means shedding the
blood of Syrians. “We need to create an environment of dialog among ourselves
as Syrians. We are no longer two distinct teams: pro-regime or against it. We
have all become pawns used by other players who are working against our
interests and wishes,” she adds.

Asked about
her motivation to continue working in the public sphere, Suzan says, “In my
darkest hours, I stand up to my despair and say that if there’s not hope, I
shall create it myself. I have a firm belief that the impending change will not
only overthrow the oppressive regime, but will also create a chain reaction of
social, intellectual and moral transformations. If my generation does not
witness this change, the coming generations definitely will.”

Reminiscing
about some remarkable points during the last nine years, she says, “The moment when
the statue of Hafez Al-Assad in Homs was toppled by the crowds demanding
freedom and chanting revolutionary songs, I felt that their voices were leaving
their throats to reside in my soul. It was a decisive and historic moment for
me.” Suzan considers the pain felt by each and every Syrian mother who lost a
child, whether by imprisonment or forced disappearance, to be her own.

Suzan dreams
of a free, democratic and pluralistic Syria, a state governed by law before
which all people are equal, a state where a human being may live in dignity,
and where women are respected and freed from the discriminatory laws that stop
them from being partners in building a Syria which is a homeland in the true sense
of the word.

Addressing
the women of Syria, Suzan says, “We are an unstoppable force but our efforts
are going to waste. If we combine our abilities we can have a strong presence
in all fields of politics, economy, science, and others. It is our duty to form
pressure groups that would help us break the male-dominated circles within
which we have been kept for a long time.