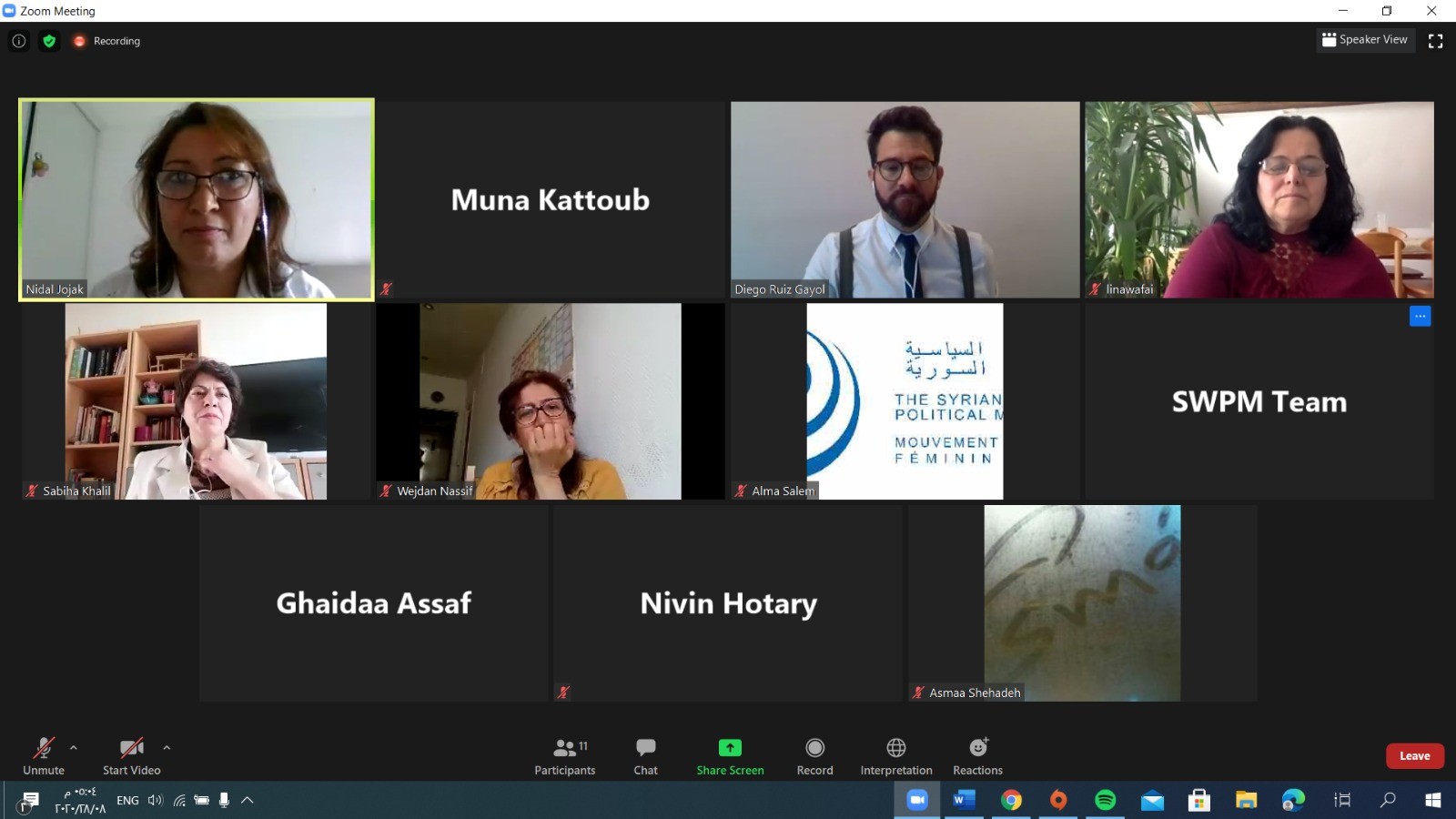 On August 28th, 2020, The Syrian Women’s Political Movement (SWPM) released a policy paper entitled “Syrian Women’s Aspirations for a Just Social Contract, an Inclusive National Identity, and Sustainable Peace”, as part of a virtual event called “Syrian politics: a feminist perspective”. The event took place via Zoom and it was attended by his Excellency Mr. Diego Ruiz Gallio, First Secretary for Human Rights in the Permanent Mission of Mexico to the United Nations Office in Geneva. The paper was the result of consultation sessions attended by 140 Syrian women in 14 different regions inside Syria, covering the entirety of the country.

The fourth in a series of policy papers prepared by the SWPM, this paper follows papers on topics of: the constitutional process, the return of refugees, and reconstruction. All papers were written to represent the perspective of Syrian women. The SWPM has taken it upon itself to carry the voice of the Syrian woman to decision makers, and make sure that her demands are respected and met by places of power. These commitments were the basis upon which the consultation sessions started around two years ago.

The SWPM believes that the voice of Syrian women must be heard all over the world by the international community. It has endeavored, therefore, to have its policy papers released in Europe, North America, Latin America, as well as with UN organizations. It also made sure that the papers reach Syrian representatives in the political process. We believe that we bear the responsibility of promoting our cause across the world, so that our views regarding the future Syria receive proper attention.

The latest paper discusses women’s views concerning the social contract in Syria both currently and historically. In the paper, women talk about the oppressive social contract imposed by the totalitarian state, in which a person’s identity depended on their absolute allegiance to the ruler. Ironically, the whole country acquired the name “Assad’s Syria”. Later, the revolution came as an attempt to establish a new form of allegiance in Syria based on a united national identity. The protesters often chanted “One, one one! The Syrian people are one.” Participating in this movement helped Syrian women develop their sense of pride in their own country. Thus, they ventured into the public sphere to play their role in the making of a new Syria.

However, the regime’s systematic and violent crackdown of the peaceful protests eventually turned the revolution into an armed struggle which led to a fragmentation in Syrian identity. As a result, Syrians fell back on their partial, pre-national identities. The behavior of armed militias played a key role in this fragmentation, women reported. At military check-points, regardless of who runs them, a person is treated differently based on their area of origin. Moreover, the displacement that accompanied most periods of the Syrian war contributed further to this national and sectarian fragmentation.

Syrian women participating in the sessions stressed that what brought us together as Syrians lay first and foremost in the will to live together peacefully in a geographically-united country. Although the country, defined by its current borders, is only one hundred years old, the fact that Syrians insist on living within these borders in one, undivided county is proof that they possess the will to coexist. Furthermore, Syrians have a common interest in living together, as each part of Syria needs the other parts to survive. No region in Syria can exist independently. In terms of economy and livelihood, Syrian regions perfectly complement each other.

“Suffering unites us all” was an opinion expressed by one of the participants. “The crisis itself, the horrors we have been through, they themselves unite us,” said another. “The suffering does not discriminate. Everyone was hurt in one way or another: the rich, the poor, men, women, everyone. This is what unites us as Syrians.”

However, our common destiny necessitates the creation of a new social contract that unites us under a national identity. Such a contract can only be established in the presence of a comprehensive political solution that lays the foundations for sustainable peace. This political solution needs to start with an immediate ceasefire, and only end when a united Syria exists. The requirements for such a process include the right to a voluntary, safe and dignified return for all refugees and displaced people, guaranteeing their repatriation into their home regions. It is also essential to resolve the problem of forced displacement which was caused by the armed conflict. In addition, the new social contract requires a fair reconstruction process which compensates the affected people, focuses on rebuilding war-damaged areas first, and is immune to politicization.

No sustainable peace or viable social contract can exist without releasing the detainees, and revealing the fate of the forcibly-disappeared and the kidnapped persons. Thus, the issue of political detention must be resolved permanently. Freedom of expression and religion must be guaranteed.

The unity of Syrian land necessitates putting an end to the state of multiple occupations across the country, the participating women noted. The existence of several areas of influence would definitely lead to a fragmentation of the Syrian population. The current rift in Syria cannot be healed without the return of a geographically-united country.

Only when all of the above is achieved can an effective social contract, based on principles of equal citizenship, be created. The women on the ground inside Syria have stressed that this new social contract should lead to establishing a democratic state that is fair to everyone regardless of their sex, ethnicity and religious affiliation.