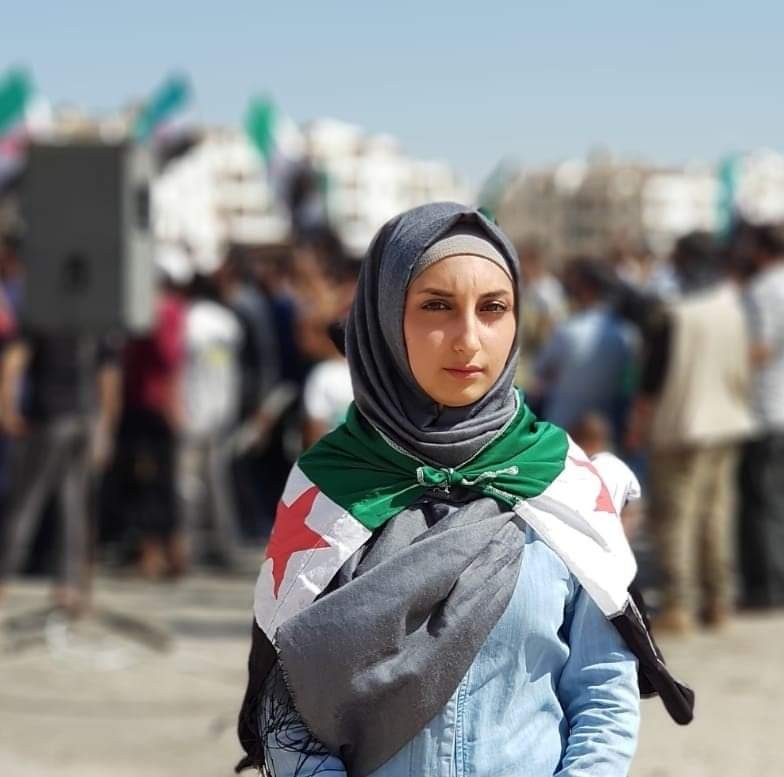 Yakeen Bido, Our Voices are Able to Change

Yakeen Bido, Our Voices are Able to Change

Our Voices are Able to Change

Yakeen Bido is known as Mirna al-Hassan and this became the name she
is known with over media outlets, and the name she introduces herself with. She
was born in the city of Idlib. She studied sociology for four years at Tishreen
University in Latakia, but she did not obtain the certificate due to the
circumstances in Idlib governorate after the outbreak of the 2011 revolution.
Mirna says: I tried to continue studying virtually and enrolled at the “Rushd”
University, department of government institutions management, but I faced
technical problems and did not like the experience of remote learning, in
addition to my media career that I had started, all that prevented me from pursuing
my education. Mirna continues: after that, I focused on my media work, I started
with written journalism, then moved on to the radio and then to the TV, as I
worked as a reporter for “Orient” TV.

Mirna describes her relationship with the start of the Syrian
revolution as the new life. Although the situation in Syria deprived Mirna from
achieving her dream of pursuing her higher studies in media sociology, she
worked on herself to refine her media knowledge, to be her city’s voice against
the killing and repression machine the regime uses against Idlib.

Regarding her relationship with her city of Idlib, Mirna says:
Idlib was considered a forgotten and marginalized governorate compared to other
governorates such as Damascus and Latakia, but it is the air that keeps me
alive. She adds: I tried during my school years to broaden my knowledge, meet
people from the rest of the governorates and deepen my affiliation to Syria in
general.

Returning to 2011 and the start of the spark of the Syrian
revolution, Mirna says: at the beginning, I was watching the demonstrators and
tried to understand the history of the Syrian women and men with the regime and
how these people suffered for decades from the power of the dictator. I started
feeling affiliated with these people. And through the coordination with my
friends, we started participating in the set-ins and demonstrations. Even in
Latakia, we tried to support women and men who conducted anti-regime transient
demonstrations. The greater the regime’s oppression is, the more Mirna insists
on going on against it, revealing her face and defying oppression.

Mirna’s family, and the population of Idlib governorate in general,
were charged as being “terrorists”, which made them a target to the fire and
bullets of the regime. They lost their homes and properties and many lost their
lives. However, Idleb liberation in 2015 was a triumph for every free Syrian,
as Mirna says.

On the personal level, Mirna has become more determined to be an
influential media voice, especially that this field is dominated by males.
Mirna says: I wanted to break the stereotype of women and prove that we are
able to serve our cause whether we are educated or not and regardless of our
backgrounds and differences. She adds: through my work, I was able to be an
incentive to other women to access the media field, and I contributed to
changing the community’s perspective of working women in various fields.

“Political performance without fair female representation is
imperfect, and its outcome will inevitably be imperfect.”

Mirna’s interest in political action started with her study of
sociology and work in journalism, as her curiosity to be acquainted with all
aspects of life around her encouraged her to search in the political reality in
Syria, and today the politics has become a daily living reality that needs to
be tracked and analyzed to extrapolate the course of events and understand the
changes on the Syrian and international arenas and their influence on Syrian
women/ men.

On the challenges facing political action in Syria, Mirna says:
marginalizing the majority of Syrian women/ men from political participation
has always been one of the biggest obstacles in the development of political
action. As most of the individuals or entities that tried in the past to work
in politics and create change ended up in prisons or exile. At present, with
the relentless attempts to understand the Syrian political reality, there
remains a loophole related to the exclusion from political participation that
the Syrian people lived for decades.

Regarding the challenges facing Syrian women in the political action,
Mirna thinks that societal challenges, represented by customs, traditions and
the inferior look at women, are among the most difficult ones, as women are
subject to specific stereotypes in terms of work, and once one woman breaks the
stereotype and tries to access the fields that are restricted to men, such as
politics, she faces the rejection of her society. Mirna adds: even women who
became members of the Syrian People’s Council or some ministries, were just an
image to achieve the requirement of women presence, but they are not decision
makers.

“Having a Syrian women political body that includes this
number of women, residing inside or outside Syria, is in itself a major
achievement, and a step for women to regain their political status.”

On her membership in the Syrian Women Political Movement, Mirna
says: I became a member of the Movement in 2019, after participating in several
political and interactive seminars with Syrian women and men working in the
political field or are activists in it. Being a Syrian residing inside Syria,
I’m aware of our need to communicate our voices by ourselves and not through
representatives, and being in a political body may play a role in achieving
this, or at least reinforcing the importance of women’s voices from inside
Syria in political bodies, and not to enhance the idea of ​​speaking on behalf
of a group of people as long as they are able to represent themselves and
describe their situations.

From Mirna’s point of view, having a Syrian women
political body that includes this number of women, residing inside or outside
Syria, is in itself a major achievement, and a step for women to regain their
political status. Mirna says: any political performance without fair female
representation is imperfect, and its outcome will inevitably be imperfect. Mirna
adds: to overcome the obstacles we faced in the past nine years, we must stop
at our mistakes and learn from them, we need to rebuild confidence in each
other as individuals, and in the political work and goal that the revolution happened
for.

Mirna says: It is important not to forget, in the upcoming stage, the
sacrifices made and to remind ourselves with the female and male martyrs who were
killed during the revolution, and with the female and male detainees, and with everyone
who paid the price for her/ his claim to freedom, as we must restore our
peaceful voice and arm ourselves with the word in the face of the killing
machines with its various forms.

One of the positive situations that Mirna remembers during the
years of the revolution was the day of one of the transient demonstrations in
the city of Latakia, when the security forces attempted to arrest the young men
participating, but the chants of women and their support for the demonstrators
prevented their arrest, and who knows what fate they would meet after, this
incident is an example of the ability of our voices to change and not being
silent in the face of the repression machine.

Due to her work as a journalist, Mirna encounters people and events
that leave a good impact on herself. For example, while covering events for
children, young girls often express their admiration of her and their desire to
work as media professionals like her in the future.

On the other hand, Mirna went through harsh moments while covering
the happenings in the city of Idlib, where she sees the bodies of children killed
in the bombing of the regime. Those scenes from the reality of daily life were
harsh, that even media outlets and social media did not publish them sometimes.

On Syria that Mirna dreams of, she says: a free Syria without al-Assad
regime, and that the Syrian people witness the trial of al-Assad as a war
criminal, as I dream of an inclusive Syria that holds all of its daughters and
sons, with their different beliefs and affiliations, and to build a country
that respects freedoms and is interested in science and culture .

Mirna’s message to the female and male Syrians and the people of
Idlib in particular is: stay determined and stick to your word, winds have stormed
on our revolution and will storm more but we are a powerful and revolutionary
people who rose up against the regime and paid massively with the blood of
martyrs, and we have many female and male detainees, and 70% of our country is
destroyed, we must not forget all that and the perpetrator must be held
accountable.

And to the Syrian women, Mirna says: you are strong, you stood
beside men in all circumstances and faced difficulties, you were mothers,
fathers, sisters, wives and a haven for your families, and you were eligible to
assume greater responsibilities.