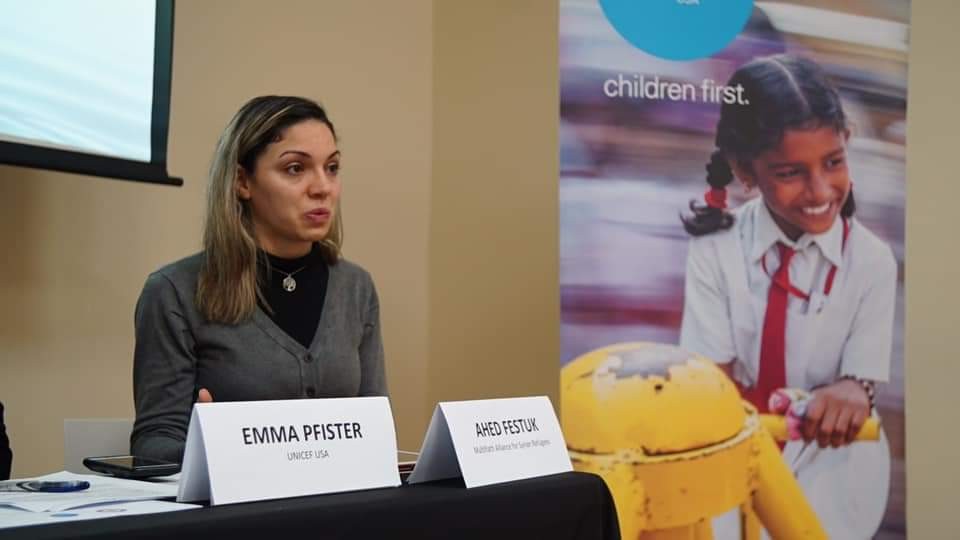 Ahed Festuk, From Participating in the Revolution to Start Participation in the Political Activity

Ahed Festuk, From Participating in the Revolution to Start Participation in the Political Activity

With the name of Ahed al-Horiayeh, she joined the coordination committees of Aleppo city where she met her female activist friends. Since the beginning of the revolution, along with other female revolutionists, Ahed resisted the idea that only men can lead demonstrations. So she wrote banners, led the chants and participated in planning specific peaceful actions like distributing flowers with secret flyers calling on women and men in Aleppo to participate in the demonstration.

Before the revolution, after she graduated from the Banking Institute in Aleppo, Ahed Festouq worked as an accountant. Feeling social and political injustice and restriction of liberties, especially as she volunteered for working in illegal settlement areas in Aleppo, Ahed started to build ideas opposing Bashar al-Assad before the revolution. Ahed recalls how ridiculous she found the fake revere of the head of the Syrian regime every time she passed by a big board with the phrase “the Ophthalmologist is in our Eyes” near Arrahman Mosque, a central

“My participation in demonstrations was a spontaneous response to my concerns and questions about change. It was the chance that I waited long for to express to all around me what I was deprived from before which my desire is to change Syria and liberate it from the authoritarian regime.”

She has always hoped for political change in her dreams and imagination as she says; however, she dared not to share such imaginations and hopes with friends before the revolution, due to intelligence tight grip.

Ahed loves Syria and has always imagined it “without the ruling gang”. The revolution in Egypt fed Ahed’s ideas, turning them to obsessions “what are we waiting for to start our revolution? Why they revolted, while we have not yet? What may I do?” Ahed says: “My participation in demonstrations was a spontaneous response to my concerns and questions about change. It was the chance that I waited long for to express to all around me what I was deprived from before which my desire is to change Syria and liberate it from the authoritarian regime.”

The day Ahed decided to demonstrate, she could not sleep. What does she have to wear so that the security forces do not distinguish her? Does she have to cover her face, or not? Will the demonstration be as big as that she watched in Tahrir Square?

The first day, the demonstration lasted for three minutes before the security forces attacked demonstrators. Ahed was one of the founders of Azhar al-horiyeh [Freedom Flowers] coordination committee in Aleppo. Started with only 15 male and female members, the coordination committee started to grow bigger. Additionally, Ahed joined many other coordination bodies in the city, the most important of which were the “Revolution University” and “Ahfad al-Kawakebi”[Alkawakebi Descendants].

When a large number of the people of Homs fled to Aleppo because of the regime severe violence against them, Ahed participated in providing shelters for them. Her contact with IDPs led her to seek receiving secret training on the provision of first aid as need for medical staff will increase in case the regime wages a war on Aleppo as it did on Homs and Daraa.

When Ahed’s family left Aleppo late 2011, she decided to stay and help in medical response, especially after liberation. At the beginning, her family opposed her decision, but soon they got convinced of the importance of her role in the hospital for saving the lives of civilians and they felt proud of her presence there combined with fear for her life.

Ahed worked since the year 2012 in Dar al-Shifa Hospital in al-Shaar street in Aleppo. She started as a nurse with simple first aid experience, such as stopping bleeding or holding fractures, but the need and the bombardment increased her experience in responding to war injuries.

By the end of 2012, al-Shifa Hospital was bombarded, and many staff members were killed, including Ahed’s close friend, engineer Boshra Sheikho who moved from western Aleppo to the eastern part to join the hospital staff.

After that, Ahed worked with the Local Council of Aleppo city in its first constituent term, and then she worked in aid development activities.

Ahed is still unsure about what drove her to make the decision to leave in 2015. It was a combination of despair, frustration and alienation, especially that most of her friends were martyred, detained or displaced. Additionally, she got tired of harassments at checkpoints and the feeling of futility.

Ahed travelled to the United States to participate in the screening of a film about her. She decided to stay there and seek asylum in the state of New York. New life commitments, including learning the new language and waiting for the asylum papers prevented her from meeting her family that has been living in Turkey for four years.

Today, Ahed works with an American organization concerned with supporting Syrian refugees in the United States, as well as with providing relief and health aid to people inside Syria. Despite the fact that she is a beginner in direct political filed, Ahed joined the Syrian Women’s Political Movement (SWPM) in response to her feeling of alienation, and the absence of her role in supporting the Syrian cause; a feeling that climaxed as Aleppo was besieged, so that she found herself standing alone in front of the UN headquarter in New York and carrying a banner calling for lifting the siege. Ahed says: “Those who are still in Syria need to feel that we are still working for the Syrian cause and have not abandoned them. I have experienced this feeling and I know the importance of participation and support from Syrians abroad. We who live outside Syria, must follow the example of the steadfast people inside it, and to communicate their voices to the world. In moments of weakness, I always remind myself of and learn from them.”

“I have a dream that through SWPM, we will be able in the future to have five female decision makers facing other five male counterparts.”

Through her participation with SWPM, Ahed hopes to gain more political knowledge and experience, with hopes that SWPM may one day become a strong political front politically representing causes and issues of Syrian women and men, with a view to restoring Syrian presence to the table of political discussions in light of the international monopoly that excluded Syrian women and men from their cause.

Ahed believes that SWPM can be a front for political action that resists discrimination against women in Syria. “I have a dream that through SWPM, we will be able in the future to have five female decision makers facing other five male counterparts,” Ahed says.