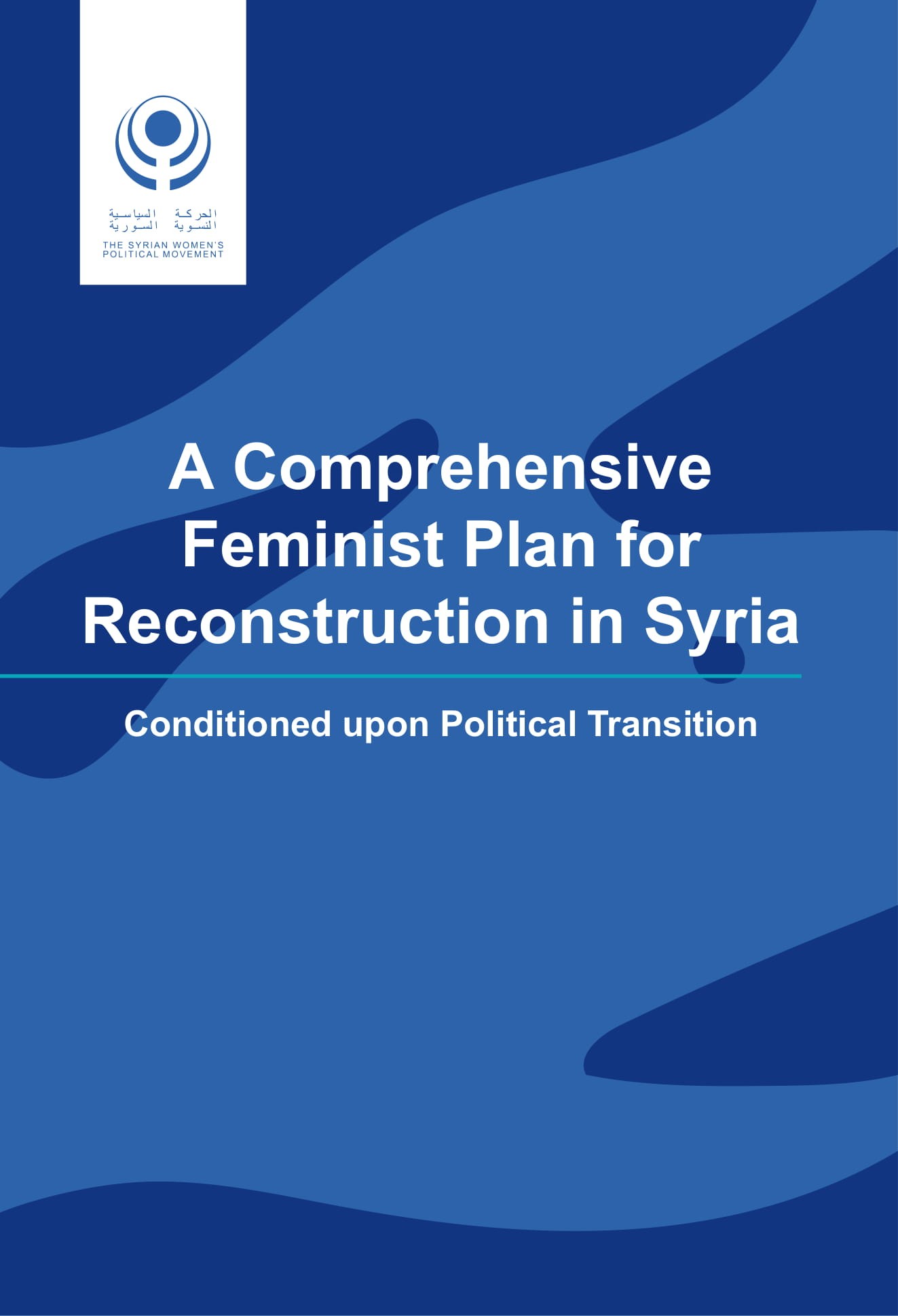 A Comprehensive
Feminist Plan for Reconstruction in Syria

with the
condition of political transition

Reconstruction in Syria was
discussed on international levels several months ago and is still subject to
considerations of different states with varying interests, political
orientations and strategic interests. These include regime allies who adopt the
approach of starting reconstruction such as Russia and Iran, and other states
that link reconstruction to the political solution based on the Geneva talks
such as European countries and the USA. Reconstruction in Syria is not merely
an economic process but rather a political process par excellence. Therefore,
the regime has constantly used this process as a bargaining chip to secure some
economic and material gains, on the one hand, and as an alternative means to
continue its war, exclusion and marginalization of all those opposed to it, on
the other.

The regime ignored any
humanitarian or social aspects in its approach to reconstruction. This was
further accompanied by the problematic absence of gender cost of war economy
and approaching the economic implications of the war, and hence reconstruction
efforts, solely in terms of infrastructure, impact on real estate, investment
or complex economic sectors. In this regard, World Bank reports indicate that
the cumulative economic losses and repercussions on the GDP due to violence and
war in Syria since the beginning of the revolution in 2011 are estimated at
about USD 226 billion.[1]
According to the World Bank reports, the sectors damaged by the war in Syria
and the cost of their reconstruction are as follows:

Based on these two levels of problems and the fact that reconstruction
is often addressed (in most local, regional and international political and
economic reports) from a narrow political perspective, SWPM, in cooperation
with WILPF, have sought to identify the discourse of women in Syria on local
levels around this issue. Thus, eight consultation sessions were held with 121 women in March 2019. These consultation sessions, which used a focus group
format, were followed by general discussion sessions in which women deliberate
over key issues. In the course of these discussions, women showed innate political
and economic awareness, analyzed the economy of war and violence from a
feminist point of view and analyzed reconstruction as addressed by the regime
from various economic, demographic, cultural and social angles taking note of
the key implications on economic, human, social and cultural capital,
developing conditions for any future reconstruction plans and concluding with
an outline for an alternative economic participatory, inclusive and feminist
plan for reconstruction.

In their analysis of the regime’s approach to reconstruction and the
social and demographic impact of the political economy policies pursued by the
regime, women found that the regime uses reconstruction to wage war of a new
type on all those who are opposed to it, especially refugees and IDPs in areas
outside its control. Further, the timing and path of the regime’s approach to
reconstruction constitutes a lie or a political ‘trick’ to ‘restore its
legitimacy in the region’ and support its allies to receive funding which
increases its own wealth and that of personalities affiliated to it. Hence, the
views and positions of the women agreed with the literature and political
analyses of reconstruction which indicate that the regime’s approach is based
on interests and personal-wealth aspirations as well as giving bonuses to
allies and ‘punishing’ the enemies particularly through granting projects to
companies, organizations and institutions affiliated with or allied to the
regime.[2]

In terms of the new form of economic war used by the regime, women
highlighted the exclusive and punitive practices against areas out of the
regime’s control and which are done with a legal cover and which have serious
repercussions on social, demographic and cultural levels leading to the
continuation of conflict as the sense of injustice increases which may in turn
lead to exacerbating social and demographic fissures among the people. In
addition to systematic social, economic and political exclusion of areas
outside the regime’s control, another form of economic punishment is practiced
against regime-controlled areas. Women from those areas indicated that the
regime makes citizens shoulder the cost of war and reconstructing the destroyed
infrastructure and services through levying taxes which mainly takes its toll
on families and people and their livelihoods and food security. This could
later give rise to inter-area disputes and wars.

Systematic impoverishment policies pursued by the regime damages,
according to the women, material, human and cultural capital in all areas in
general, and those outside its control in particular. In this regard, women
highlighted deteriorating conditions and high living expenses in all areas and
high unemployment rates (in areas outside regime control), brain drain due to
security conditions and compulsory conscription policy (in regime-controlled
areas) which tilts the balance of human capital, let alone the impact on
children in terms of child soldiers, school dropouts and coercive marriage of
girls.

Based on the overall picture of
the economy of war and violence outlined by women from a holistic feminist
perspective and their feminist analysis of the exclusive and punitive dimension
of reconstruction in its political, security, demographic and economic
dimensions, women thought that any reconstruction efforts must only start after
two key conditions are met; namely peaceful political transition, security,
safety and ceasefire as well as implementing gender-sensitive transitional
justice mechanisms.

1)
Prioritizing services, public services and infrastructure particularly
of the services sector (health and education) and public services (water,
electricity and gas). These sectors must be prioritized over the real estate
sector as they could, if developed in a balanced manner in all areas, promote
social cohesion and overcome the sense of injustice and grievances among those
areas.

3)
Promoting and activating women political and social participation in the
reconstruction phase, building on the efforts and roles of women during
conflict and making use of the gradual and positive shift in norms and
traditions and the perception of women and their work outside the household.

5)
Reforming and amending laws of property through revoking the unjust laws
and decrees issued by the regime since the beginning of the conflict while
ensuring international legal protection for women so they can prove their
property rights in cases of husband death or absence.

6)
Promoting monitoring and accountability and enhancing mechanisms of
responding to complaints in order to ensure efficiency and prevent waste and
corruption while taking note of the principles of competence, diversity and selecting people on the bases of merit rather than nepotism and imposition.

[1] The Toll of War, The Economic and
Social Consequences of the Conflict in Syria https://www.worldbank.org/en/country/syria/publication/the-toll-of-war-the-economic-and-social-consequences-of-the-conflict-in-syria (Last accessed on May 2019).

[2] Brookings
Institute for Public Policy Analysis, Rules of Reconstruction in Syria,
available at: https://brook.gs/2wwIRai (last
access in May 2019)