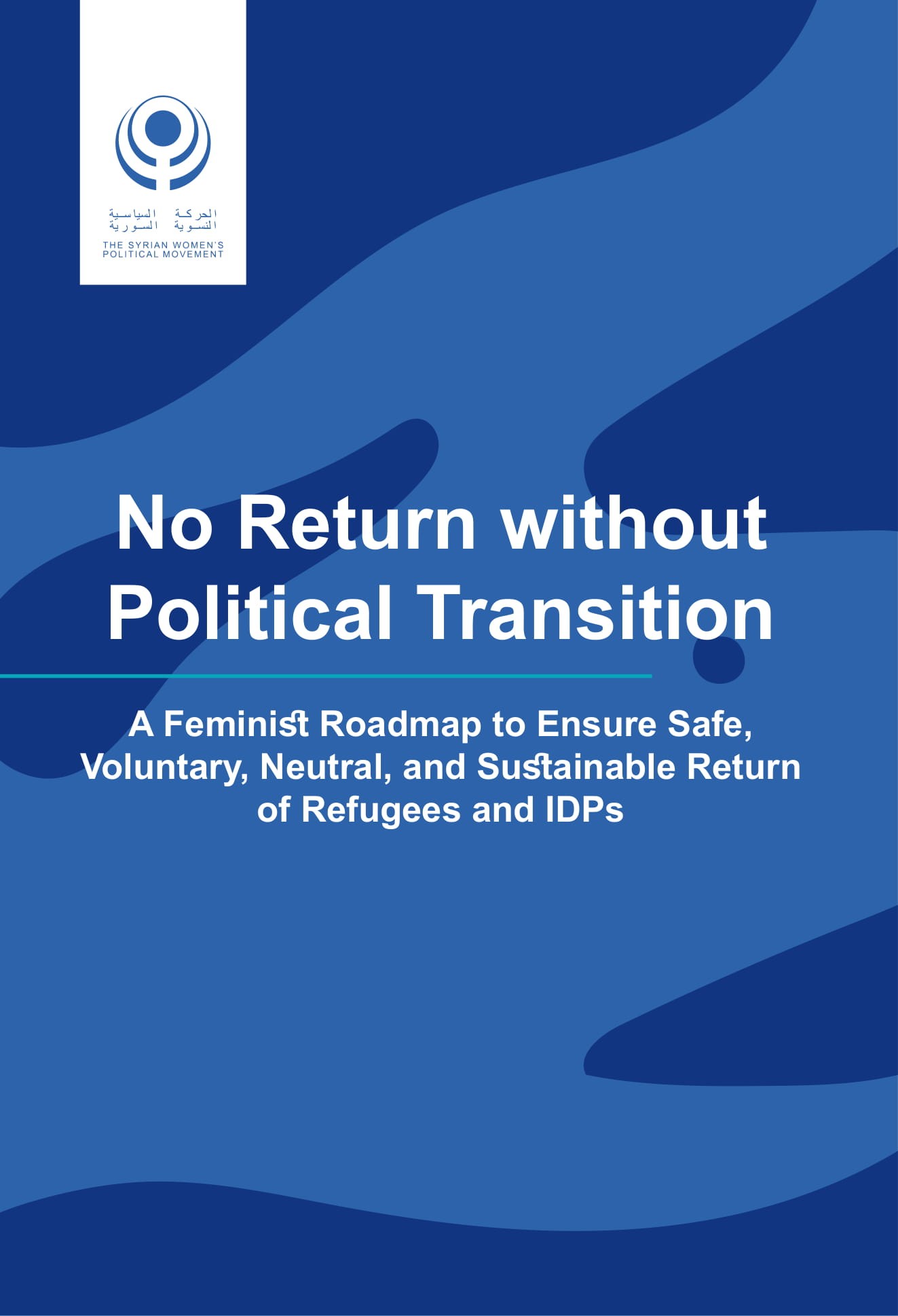 No Return without Political Transition

Return of
Refugees and IDPs

As the return of
refugees issue gets discussed at international levels, and the humanitarian
dimension thereof gets isolated by the Syrian regime and some states, and
because the issue of internal displacement has not received the same media
coverage or international attention as the issue of refugees, the Syrian
Women’s Political Movement (SWPM), in partnership with Women’s International
League for Peace and Freedom (WILPF), was keen to explore the views, attitudes,
concerns, and conditions of, primarily, displaced women, as well as refugee
women on the issue of return and their views on the conditions for safe,
voluntary, and sustainable return. Accordingly, the SWPM held eight
consultative sessions in February 2019, involving 122 Syrian women; two
sessions were held in regime-held areas, five in areas outside regime control,
and one in a neighboring country.

This policy paper
addresses the problem of the return of refugees as proposed by the regime and
its allies, using it as a political bargaining chip that serves narrow
political, economic, and geostrategic interests, without considering the
humanitarian, legal, or gender dimensions, while turning a blind eye to the
rights of refugees and IDPs and their gender priorities, all of which would
guarantee their human dignity.

Looking at the women’s
responses and analyses of the general context and the interplay of economic, political,
and security factors and gender implications thereof, the following key issues
can be identified:

–
The innate feminist
awareness of all political, economic, security, cultural, social, and gender
dimensions of the issues of displacement, asylum, and return;

–
The comprehensiveness of the
feminist view, through the general consideration of the impact of return on all
aspects of society, and all cultural, social, economic, and societal levels,
and their implications for several groups rather than being restricted to the
personal and/or individual level;

–
The comprehensiveness of
feminist demands in terms of the return and post-return, which guarantee, if
implemented, sustainable and feminist peace;

–
The feminist and innate
political awareness of transitional justice and its mechanisms, as well as the
elements of political solution and transition.

The women expressed
their general views about the question of return and the timing of discussing
this topic. They presented their perception of the ideal conditions for
tackling this matter. The answers and positions of many women from different
areas agreed on the basic idea that return is everyone’s right. Women who
participated in the consultations stated that international discussions on the
return of refugees and IDPs are illogical and unacceptable because they are
isolated from reaching a comprehensive political agreement or solution and
without a neutral entity that can guarantee safe and sustainable return of
refugees and IDPs. Those women also stressed that returning now is impossible,
especially in the current conditions, and the security and political
atmospheres. Return, according to them, is impossible unless a political
solution that ensures peaceful political transition is reached.

The women pointed out a
number of factors and tools heavily employed by the regime, having security,
political, and demographic dimensions, together with the militarization and the
male-patriarchal environment, lead to the creation of an environment that is
far from safe or welcoming for the return of forcibly displaced women and
families to their original towns, cities, and homes.

The continuation of
indiscriminate bombardment, military sieges of areas out of regime control,
tightening the security grip on families and individuals thinking of return –
whether by arbitrary detention, or the compulsory conscription of young men, in
addition to other practices – have all been the most prominent factors impeding
people’s return. Added to that, the systematic exclusionary administrative
practices aimed at refugees and IDPs and their families, that are being
implemented under a legal disguise (Law No 10 (2018)), to expropriate people’s
properties and further exclude and intimidate them. Practices of administrative
restriction and isolation of areas outside the control of the regime and not
recognizing official institutions operating in those areas or the documents
they issue are still among the key factors contributing to the loss of any hope
for stability or safety for IDPs, or even entertaining the idea of safe return
in the near future, due to the legal and administrative fragility, which impose
additional hardships on women.

In addition to those
factors, the women discussed a number of feminist concerns related to the
patriarchal and male-dominated system that is still prevailing in Syria, which
constitute a key challenge for them in case of returning. The key concerns were
represented in compromising their economic independence, the return to a
society governed by conservative traditions and customs, and the absence of
laws, measures, and frameworks that regulate and govern relations among
citizens and guarantee settling the legal status of women, particularly
relating to personal status, official identification documents, and proof of
property ownership.

Conditions, elements, and guarantees for the safe, voluntary,
and neutral return, from a feminist perspective

According to the
International Organization for Migration (IOM), in a statistical report (that
is not gender-sensitive) conducted in 2017,[1] the
economic and security factors constituted key reasons for the return of
refugees to Syria. The findings of the study showed that 25% of returnees
stated that they went back to protect their property, 20% said that the return
was because of the improved security situation, 18% returned due to the
improved economic conditions, 17% returned because they were unable to
integrate culturally and socially in the places of their refuge/displacement,
and 15% returned because the economic situation became harder in areas of their
refuge.

This narrative
concerning the elements for return lack the feminist perspective. That was
expressed by women who participated in the consultations who provided
comprehensive views of key elements, guarantees, and conditions that should be
available to ensure a safe return for refugees and IDPs. These elements and
conditions constitute a feminist set of demands regarding the return and
post-return, which, if implemented, would guarantee feminist sustainable peace.
The women underlined two key conditions that should be put in place before the
implementation of return. The first condition is reaching a political solution
that ensures a peaceful sustainable feminist political transition, and the
second is ensuring implementation of transitional justice mechanisms in Syria.

The women stated the
elements and guarantees that should be available before talking about return or
encouraging refugees and IDPs to return, and these include ensuring:

–
The decision
to return is an informed substantiated one and
not coerced;

–
Availability of quality
services (education, health, water, and food) and infrastructures (electricity
grid, water networks, and heating), as well as the availability of safe
housing;

–
Presence of international
and UN entities to guarantee protection
of refugees and IDPs during their return;

–
Full settlement of legal and
administrative issues for refugees and IDPs;

–
Abolishment of compulsory
military service, or making it compulsory once security is
restored and the regime changed;

–
Elimination of the current
geographic and regional isolation, and not imposing restrictions on refugees and IDPs in places of refuge/displacement;

–
Respect and implementation of political and civil rights, including freedom of speech
and expression;

–
Provision of a
safe economic, social, and environmental atmosphere for families and children;

–
Abolishing Law No 10 and returning properties to their original and rightful owners.

Women concluded with a
set of recommendations directed to several entities, to ensure revitalizing the
political transition process, then can have a safe, voluntary, and sustainable
return of refugees and IDPs that ensures their safety, security, and access to
basic services.

Women’s demands to the United Nations and the international
community

–
Requesting that governments and countries to not recognize the regime as
legitimate and to not discuss with it the return of refugees before accomplishing a political
transition;

–
Forming an international
committee of several UN bodies to ensure the provision of key guarantees for a
safe return for refugees and IDPs, monitor their return, ensure their safety
and protection
from persecution, supervise the provision of basic
needs and services for them during and after their return, and establish fact-finding and
accountability committees in case of disappearance of refugees/IDPs;

–
Getting international
recognition of official institutions operating in areas outside regime control,
to coordinate and deal with them, rather than limit legitimacy to regime
institutions only.

–
Pushing for a solution to
and disclosure
of the fate of all detainees.

–
International civil society
organizations should play an advocacy role at international and regional levels
as intermediaries between local communities in Syria and the international
community, to convey the voices and demands of Syrian women;

–
The provision of services
for local communities, especially women, and the provision of programs for
awareness-raising, empowerment, social integration, and psychological and
psychosocial support;

–
Monitoring elections to
ensure that they are free, fair, and transparent, and ensuring the
participation of all community groups therein;

–
Providing administrative and
procedural facilitations for registering marriages and births/descent, and solving pending issues such as inheritance and
property ownership.

Despite the lack of
women’s trust in the role and effectiveness of local authorities, women
addressed them with a number of demands and recommendations, mainly:

–
Improving efforts to maintain security and safety in villages and towns by condensing the role of police and security bodies in areas outside
regime control.

–
Ensuring
impartiality of these authorities and ensuring they are not affiliated with any
political or religious entity.

–
Reforming the judiciary and
ensuring its independence, impartiality, and fairness and subjecting it to
oversight;

–
Enhancing women role in the
judicial bodies and dedicating a women’s committee
within the judiciary to solve women-specific legal problems relating to
property ownership and inheritance;

–
Legal reform through
enacting or amending property laws so that women can get ownership of property
in the event of the death of their husbands, in addition to enacting protective
laws for divorced women and widows, in terms of economic rights and social
security.