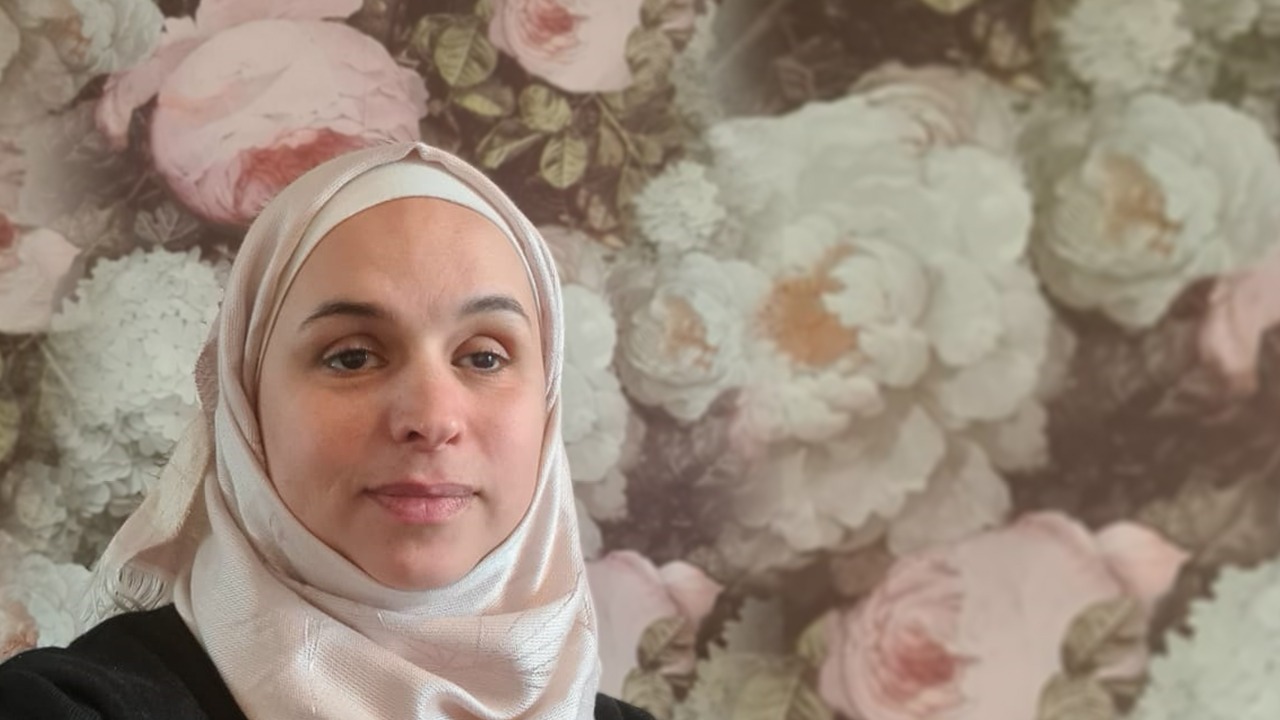 Thuraya Hejazi is from Damascus countryside (Rif Dimashq) and lives in France. She holds a master’s degree in finance management, and currently works with several organizations as an economic consultant and a project coordinator. She is a member of the Syrian Women Political Movement.

Thuraya is from Damascus countryside (Rif Dimashq). She moved to France in 2015. She finished studying economics in 2004 and obtained a master’s degree in finance management in 2006. In Syria, she established a feasibility studies and financial evaluation office for projects and worked as a lecturer at a financial institute subordinate to the Ministry of Higher Education in Damascus.

Thuraya says she grew up in a rather traditional environment, which, however, encourages education, especially her family, and she adds that her father was an old opponent to the regime and has political activity, and in general in Damascus countryside there is a large number of opponents to the regime and that is why Damascus countryside was one of the first areas to respond to the revolution. As for her participation in the revolution, Thuraya says her response came late because she was anxious about the way the regime would deal with the protests, being aware of and familiar with the regime’s security methods, and because she waited for the young president at that time, Bashar al-Assad, to use a different policy.

This, of course, did not happen and repression started to take on a violent form shortly after the protests began, following this Thuraya joined a group of revolutionary women and began organizing silent marches and distributing leaflets. Then, Thuraya’s group expanded, and through revolutionary activities, she met Syrian women and men who believe in the revolution and were working for it. She carried out multiple civil activities in several governorates, but specifically in Eastern Ghouta, where her work in multiple civil activities continued until the tight siege on Ghouta. She received support from her father, who was watching and hearing with his eyes full with tears.

Thuraya was arrested twice; the first lasted 3 months, during which she lost 5 of her friends martyred under torture. It was hard time, but it passed as she always felt challenged, while in the second time, she was pregnant, and she describes this experience as cruel even though it was for one day only, but she was terrified because she recalled what it means for a woman to give birth in prison, as she witnessed two births during her first arrest.

She continues: after I left the prison, my family insisted that I travel outside Syria to give birth. Back then, the procedures on the Syrian-Lebanese border were tight, so my husband and I decided to stay in Lebanon. We were not ready for that move, so we faced great difficulties during our stay in Lebanon, especially in registering our baby which requires a visit to the Syrian embassy, ​​and this is impossible in my case, so we decided to apply for a visa to France.

And about the experience of her arrival in France, Thuraya says: they were dreary days away from family and friends, and the different language and lifestyle with the new beginning again, all made the experience more difficult, and the most difficult is to live without the ability to dream. Far from the past, everything is without a soul, as it is not attached to memories.

And about her first interest in political work, Thuraya says: late 2011, I started getting closer to the circles interested in politics, and at that time I met people, including young adults, who enriched my political knowledge and I learnt from their experiences and opinions. Later, we started establishing several political rallies, the last of which was a movement called (the National Call) which was unsuccessful due to the detention of some of us and the travel of others.

“I have an obsession to access the actual reality of women and derive tools for solutions and support from it, and this is what I want to achieve through the SWPM. We need to be ready for the future participation in decision-making positions.”

As for the challenges facing the political action today, Thuraya says: the past generation imposed itself firmly on the action while its aspirations and dynamics differ from what the youth demands of in the street, I kept up with this action and worked closely with its youth and realized the large gap between the two generations. Moreover, those who are on the political front today are almost like traders, and all this is happening at the expense of civilians’ interests.

On the challenges facing women in the political field Thuraya thinks there are plenty, as women do not have tools for change, suitable and considerate to women’s reality and their social differences, and also because Syrians do not know or acknowledge their differences and diversities, which in turn contributed to the rejection of many Syrian communities to the idea of ​​change. Women’s associations or groups are still distant from reality, as they want all women to be the same ignoring the particularity of the social and cultural backgrounds of each region. Thuraya does not hide its reservation on the work of some feminist organizations of which knowledge of women’s reality and needs is limited to the pre-planned projects they make to those women.

Regarding her membership in the “Syrian Women Political Movement,” Thuraya says: when I learnt about the SWPM’s goals, I found them intersecting with what I am looking for, especially as it brings feminist women and men together in an organized framework with clear goals. Thuraya adds: from my side, I have an obsession to access the actual reality of women and derive tools for solutions and support from it, and this is what I want to achieve through the Movement. We need to be ready for the future participation in decision-making positions.

“The revolution brought change to my personality. I love Thuraya who I am now and who resembles me more.”

Thuraya believes in the values ​​and principles for which the revolution started. However, the tools and mechanisms must be reassessed, as differences and discord within the ranks of the revolution itself have affected everyone and distorted the true demands from its course.

As for what gives her the motivation to continue, Thuraya says: despite the disappointments and difficulties that have faced us as Syrians believing in the revolution, I have not lost hope that there are many Syrians who love their country and who work with dedication to improve it, because Syrians deserve to live.

About Syria that Thuraya dreams of, she says: I dream of a civil state that respects human rights, and mutual respect prevails among its people regardless of their beliefs and affiliations, and that it is a state of law in the first place.

And to Syrian women, Thuraya says: for every woman I say: be yourself and as you want to be, not as others want. Don’t despair if you want change and you could not do it, with time and will you will succeed.

From the harsh moments Thuraya went through, she says: the death of my father and that I did not say goodbye to him have a great impact on my life and it is difficult for me to believe, along with the injury of a friend of mine with a tank bomb, I stayed with him in the hospital and when he started recovering and we started dreaming about the future, medical complications happened and he was martyred.

The most beautiful thing Thuraya recalls about the years of the revolution is the change the revolution brought to her personality. She says: I now love Thuraya who I am and who resembles me more. She also recalls two minutes during which she saw her fiancé during their detention in Syria; they are stuck in her memory.