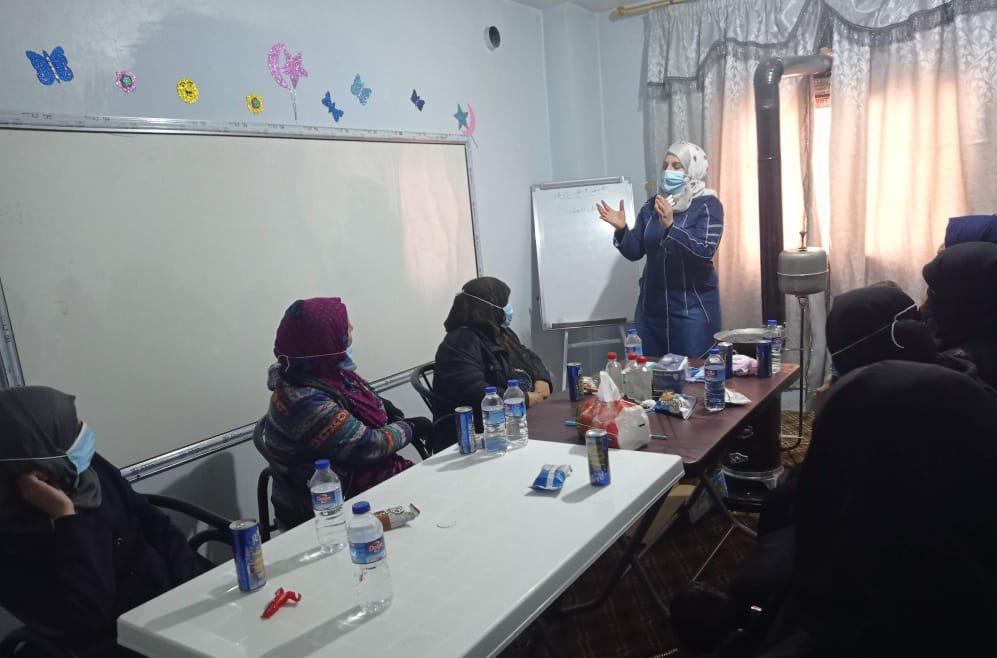 Born in the city of Rastan near Homs, Hiba Saadeddine studied at the Faculty of Education to become a class teacher. After graduation, she worked as a primary school teacher in Key Stage 1.  In 2018, she left the Northern Countryside of Homs in the mass exodus of forced displacement. She lived in several areas in the Northern Countryside of Idlib and Aleppo before settling in Jindires. She is currently Team Leader of the psychosocial support workers team. She was responsible for activating a number of political awareness sessions for women with several civil society organizations in her region.

Reminiscing about her participation in the early days of the Revolution, Hiba says “Since the outset, my attitude towards the Revolution was crystal clear. I took part in the peaceful demonstrations in Rastan which demanded reforms and expressed solidarity with the detained children of Daraa. The demonstrations moved later to demand the fall of the regime when the government retaliated in full, bloody force.”

“My main motivation for joining the popular uprising was to stop the injustice in Syria and end the dictatorship,” she adds. “I have personally been witness to the crimes of the regime. First, my cousin was shot by a sniper on the Friday of Rage. Later, my brother died in detention. He was arrested in the early days of the Revolution. He was a first-year student at the Military College in Homs. He was first confined to stay in the College, then he was dragged to several Security Branches before he died in Sednaya Prison in 2013 as a result of medical complications and torture. These incidents filled me with determination to continue the path to freedom. Events escalated until the regime lost control of Rastan. Soon after, the regime laid siege to us and we lost most of life’s basic necessities. We were then forcibly displaced to the north of Syria in 2018.”

Hiba stresses that the shelling and the siege were not the only reasons that convinced her to move out of her city. She was totally against the idea of living under the control of regime forces, which left her no choice but to leave her home. In the Syrian North, she moved between several places. “There were many reasons for my numerous moves,” she says. “They include, the lack of security, seeking a source of income, the shock of seeing the Revolution turn into an in-fighting between factions, as well as Turkish control over several areas. I always find myself leaving one area to another seeking living conditions which are less bad.”

The experience of forced displacement was not an easy one for Hiba who found no solace in her new reality. She was facing new challenges, like the lack of insecurity, the uncontrolled spread of weapons, the frequent bombings in the region, as well as fear for her family from abduction. Yet, she says, “despite the mixture of feelings of hatred for the criminal regime that caused all this suffering, and anxiety about the current situation, new possibilities opened up for me in the ‘liberated north’ to participate more effectively, and to work on developing my skills to contribute to civil work through training, dialogue and awareness sessions for women from all segments of society. I have been involved with several civil society organizations and took part in dialogue sessions on feminist political issues. I was also able to form a network of relations among political activists, which increased my desire to engage in public affairs and feminist work. This was the background to my current work.”

“The two most prominent challenges facing women today are the spread of ignorance and insecurity. In my opinion, we cannot separate the performance of Syrian women from their reality. A large proportion of Syrian women have lost their sense of security due to being displaced, homeless or living under the rule of oppressive social and political authorities. This will necessarily reflect on these women’s role in political life, because their priorities are different.”

Talking about when she first became interested in politics, Hiba says “I started to take an interest in politics as soon as the Revolution started. I wanted to understand the events in the right context, and to know more about the direct and indirect reasons that led Syrians to rebel against the regime despite their knowledge of its brutality. Anyone who participated in the Revolution knew that the regime was dictatorial and oppressive. Those who took to the streets wanted an end to the chronic injustices in Syria. But I felt the need to dig deeper into the history of this regime and the possibilities facing the popular uprising. That is why, after my displacement at a later stage, I joined several training courses in politics. I found a more open platform to share and express my opinions.”

For Hiba, the major obstacle facing political activism before the 2011 Revolution was that the entirety of the Syrian population was prohibited from being involved in politics. Only a handful of male politicians were in charge of the whole country. As a result, many Syrians lost the will to be involved in politics. It is no secret that talking politics was surrounded with an aura of terror in Syria. All of these facts hindered the formation of a diverse and open-minded political milieu. The concept of politics was myopically limited to watching the daily news and reading the state newspapers, which is not enough to create a proper awareness of the political situation and its contexts. As for the tiny minority who risked being involved in politics, they were constantly living in fear of persecution and detention. “Today, we face a different type of obstacles such as anarchy and the spread of unlawfully armed gangs with conflicting agendas,” Hiba adds. “This is a great impediment in the face of creating a free and independent state. The Syrian role in Syria has shrunk in the face of foreign interferences and agendas which contradict the wishes of the Syrian people who started the Revolution in 2011.”

Talking about the challenges particularly facing Syrian women in political work, Hiba says, “the two most prominent challenges facing women today are the spread of ignorance and insecurity. In my opinion, we cannot separate the performance of Syrian women from their reality. A large proportion of Syrian women have lost their sense of security due to being displaced, homeless or living under the rule of oppressive social and political authorities. This will necessarily reflect on these women’s role in political life, because their priorities are different. Although one comes across a great deal of praise for women assuming responsibility, the fact of the matter is that women’s involvement is limited to earning a living for their family, and has nothing to do with developing themselves or their engagement in public life.”

“The revolution is an idea, and belief in ideas is the only way to make them a reality. I firmly believe that collective work and involvement in political bodies helps to organize and create a strong popular base, and helps to raise awareness of the importance of political activism. Eventually, we will be able to form political parties and groups with different orientations, who agree on creating a new Syria which will be based on equal citizenship.”

One of the main reasons that led Hiba to join the SWPM was her firm belief in the importance of the presence of the female viewpoint in political work. “I am totally convinced that feminism is capable of effecting a profound change in politics in particular, and in all areas in general,” she says. “Women must be involved in politics and decision-making alongside men. The continuation of the current marginalization of women from politics will only lead to more despotism in Syria, with a future as bleak as the present and the past. Therefore, I found that the SWPM is the political body with which I shared a vision. It aims at activating the role and representation of women in politics and on the decision-making boards,” she adds. “I hope that soon the conditions will improve to allow the SWPM to open a branch in the north of Syria. This way, many women, as well as men, will have the opportunity to know more about women’s political ideas and their importance for the future of Syria.”

We asked Hiba about what happened to the values and principles of the Revolution. “Syrian people have come a long way towards achieving their demands,” she answered. “All we need now is to organize the revolutionary and the political fronts and unite them while focusing on the goals of the Revolution. Some corrupt leaders need to be changed too. There is no harm in stopping to reflect upon our course so far. We need to analyze our position, admit any mistakes and try to correct them before it is too late.”

About her belief in the importance of continuing political and revolutionary work, Hiba says, “the revolution is an idea, and belief in ideas is the only way to make them a reality. I firmly believe that collective work and involvement in political bodies helps to organize and create a strong popular base, and helps to raise awareness of the importance of political activism. Eventually, we will be able to form political parties and groups with different orientations, who agree on creating a new Syria which will be based on equal citizenship.”

About the Syria of her dreams, Hiba says “I dream of a Syria that has been healed of its injuries before anything else. I see it as a sovereign state, a country of equal citizenship, a place where people’s dignity and rights are upheld as sacrosanct.”