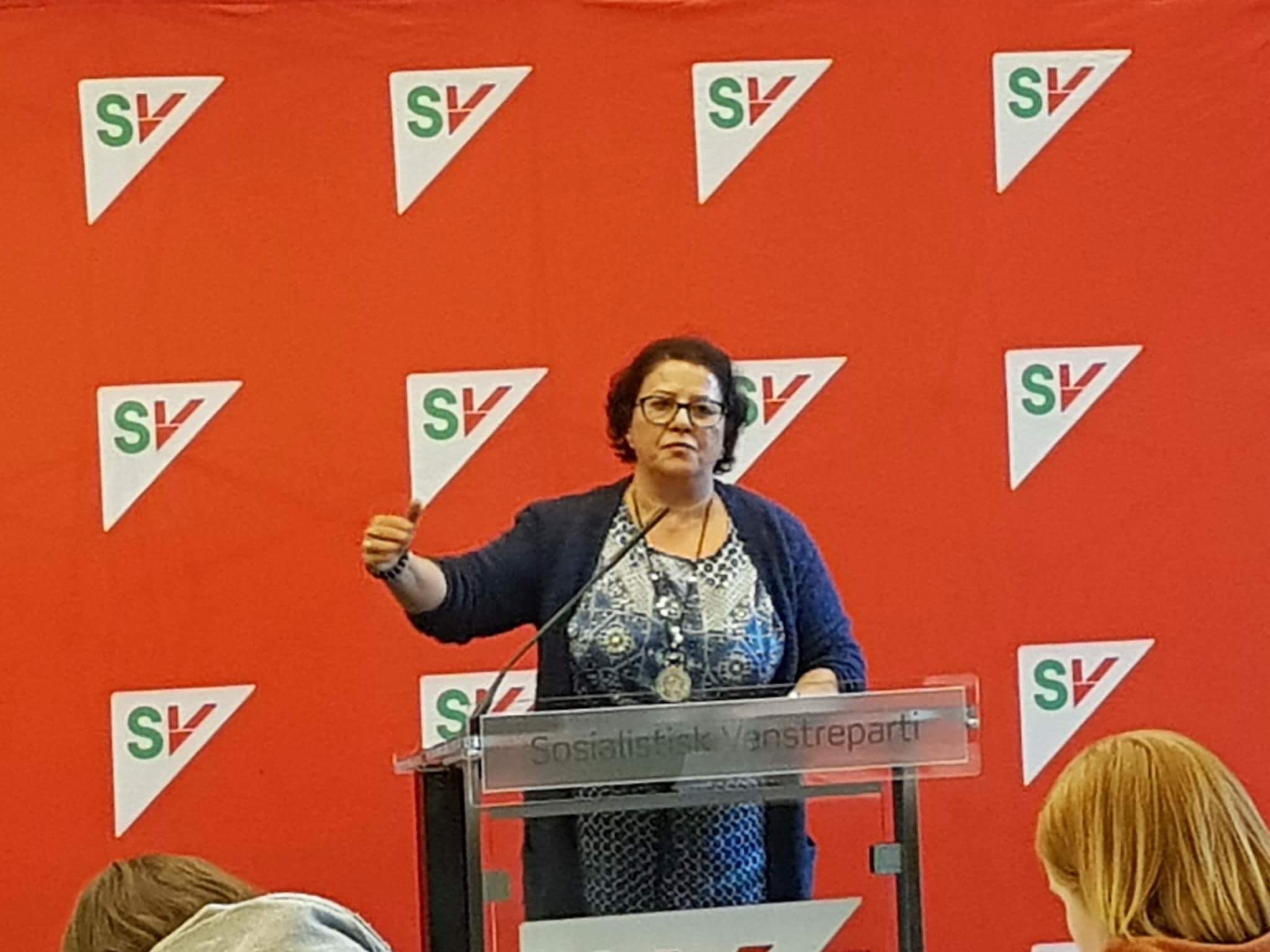 Hiyam Al-Shairout was born in the city of Ma‘arrat al-Nu‘man in Idlib. She is a graduate of Arabic Literature from Damascus University. She also studied Education and Psychology at Vestfold University, Norway. Having finished her studies in Religion as well as family education for newcomers to Norway, she currently teaches Arabic and Norwegian. She is a member of the Socialist Left Party in Norway and is a humanitarian activist especially in the fields of Human Rights and Asylum. Since 1991, Hiyam has been living in the city of Larvik in the county of Vestfold in Norway. Her relationship with Norway, Hiyam says, is excellent. “I had a few problems in the first few years,” she comments. “These were caused by the different language, loss of identity, lack of job opportunities, missing my family and friends, etc. But now after 30 years, I can say that Norway has become my second home which has given me security, stability and a bright future for my children.”

Despite living outside Syria, Hiyam felt extremely excited when the Syrian Revolution broke out in 2011. “I personally took part in the Revolution when I visited Syria in 2013,” she adds. “There, I saw for myself the level of destruction caused by the regime in my hometown, Ma‘arrat al-Nu‘man. I also witnessed the mass exodus of Syrians from their homes to less dangerous areas. My family has had its fair share of suffering under the brutal regime. My brother Muhammad was arrested for being a member of the Free Syrian Army, and he later died.”

The death of her brother, Hiyam says, filled her with sadness and rage. It also made her more determined than ever to support the Revolution by joining demonstrations against the regime in Norway, and by working to expose the regime’s lies via the media and through The Socialist Left Party, of which she is a member.

“Women must take part in organized political work. We need to increase women’s political awareness. I am of the opinion that it’s time to destigmatize political work. Women should know more about the importance of being active in politics for the creation of the new Syria we want.”

Hiyam’s interest in politics started years before the Syrian Revolution. She is a member of Norway’s Socialist Left Party, and was a Councilor on the Larvik City Council between 2007 and 2011. “Politics has given me a space to think how I can help the community where I live,” she says. “I was also able to help the immigrants in my community in order to make a change. I was able to speak about the issues in my home country, as well as work on the issues that concern newcomers to Norway, and defend their rights.”

The challenges facing those who work in politics in the Syrian context are many, Hiyam posits. They include closing the door to working in politics freely. Power was and still is monopolized by those who represent the regime. This firm grip on power makes it extremely difficult to enter the world of politics. In Hiyam’s opinion, this complicates the process of reaching a political solution that satisfies the Syrian people who have gone through a great deal of suffering in their quest for freedom and democracy.

As for challenges facing Syrian women working in politics, Hiyam believes that they include, “excluding women from decision-making circles, giving high-ranking positions exclusively to men, as well as the public’s lack of conviction in women’s suitability to occupy a public office.”

For Hiyam, joining the SWPM was based on her “belief that women must take part in organized political work.” She elaborates, “we need to increase women’s political awareness. I am also of the opinion that it’s time to destigmatize political work. Women should know more about the importance of being active in politics for the creation of the new Syria we want. We have amazing female talents with the experience and knowledge to help in the upcoming political challenges. Therefore, preparing Syrian women today for the future is of paramount importance. I feel particularly proud of the diversity of women in the SWPM. This diversity represents Syria as a whole.”

“On the other hand, there are obstacles which we are trying to overcome,” says Hiyam. “We need to spread the word about our work more widely. The SWPM also needs to contribute to the creation of a suitable atmosphere for women’s participation, not only in political work but in all decision-making circles.”

“The necessity of the presence of Syrian women at the negotiating table, in transitional committees, and in every effort concerned with the departure of Assad and the formation of a new state, is one of the reasons for my presence in the SWPM. I know that the voice of Syrian women will one day be heard and it will unite those who want Syria to be a country of freedom, justice and equal citizenship.”

Talking about the current status quo and the political performance of the opposition today, Hiyam says, “I really wish I could be optimistic, but the failure of the opposition, regardless of its components, to unite and present a serious alternative to the regime, in addition to the successive losses on the ground, all make the Revolution weak. Its leaders are divided, and they work in accordance with foreign agendas. The hopes of many Syrians have been shattered. There is a crisis of confidence in forming a united front. So, here we are today, having to accept an impossible equation that will keep us for many years with no choice, no solution and no stability. Meanwhile, the poor Syrian people continue to pay a hefty price.”

“This is what I see on the general public sphere. On a personal level, I believe in the role of women through participation in all stages of the peacemaking process, the upcoming elections, and in placing pressure on the parties of the conflict and any formed government so that the demands of women are taken seriously, which is in the interest of all Syrian men and women, and also to make sure that women’s participation in the new Syria is real and effective. The necessity of the presence of Syrian women at the negotiating table, in transitional committees, and in every effort concerned with the departure of Assad and the formation of a new state, is one of the reasons for my presence in the SWPM. I know that the voice of Syrian women will one day be heard and it will unite those who want Syria to be a country of freedom, justice and equal citizenship.”

Over the past ten years, Syrian men and women have lived through extraordinary personal and public experiences. Some were positive but most were bitter trials. Recalling some positive moments, Hiyam says, “Because I have been living in Norway for such a long time, I did not have the opportunity to join Syrian women’s organizations, although I am politically active in Norway. I am a member of several organizations concerned with empowering women, especially among immigrant minorities. During the revolution, I had the honor of joining the Syrian Women’s Network, and meeting Syrian women in conferences held in Sweden, Egypt, Tunisia and Germany. These were women who had worked on the ground. I heard the experiences they went through from organizing and participating in demonstrations, to their experiences with detention. I was able to see their ambition for change in Syria. I am grateful that I had the opportunity to provide some support to the Syrian Revolution by participating in demonstrations in Norway. I shared the suffering of my people through the Socialist Left Party. I was the voice of Syrian women in the Norwegian media and on social media. I am proud that I did away with my old fear of the Assad regime. Joining the SWPM remains the most meaningful achievement for me. In this movement, I found a long-held dream that will be realized by the efforts of its members.”

About the Syria of her dreams, Hiyam says, “I dream of a Syria with no prisoners of conscience, where authority is given to the most competent person in accordance with the constitution, regardless of religion, ethnicity or gender. I dream of reaching a real political solution with international guarantees with no future for Assad in Syria. I dream of the reconstruction of Syria and the improvement of its economy so that everyone can lead a decent life. On the top of my dreams is the safe and voluntary return of all the displaced people to their homes.”

Addressing the women of Syria, Hiyam says, “You are Syria’s hope. We count on you to achieve our dreams in building a country based on democracy and freedom, where men and women are equal. There are women among you who can be the leaders who will end the suffering of all Syrians.”